Each week we highlight what is seasonal, talk to those who grow it, and share a recipe (or two). This week: corn. 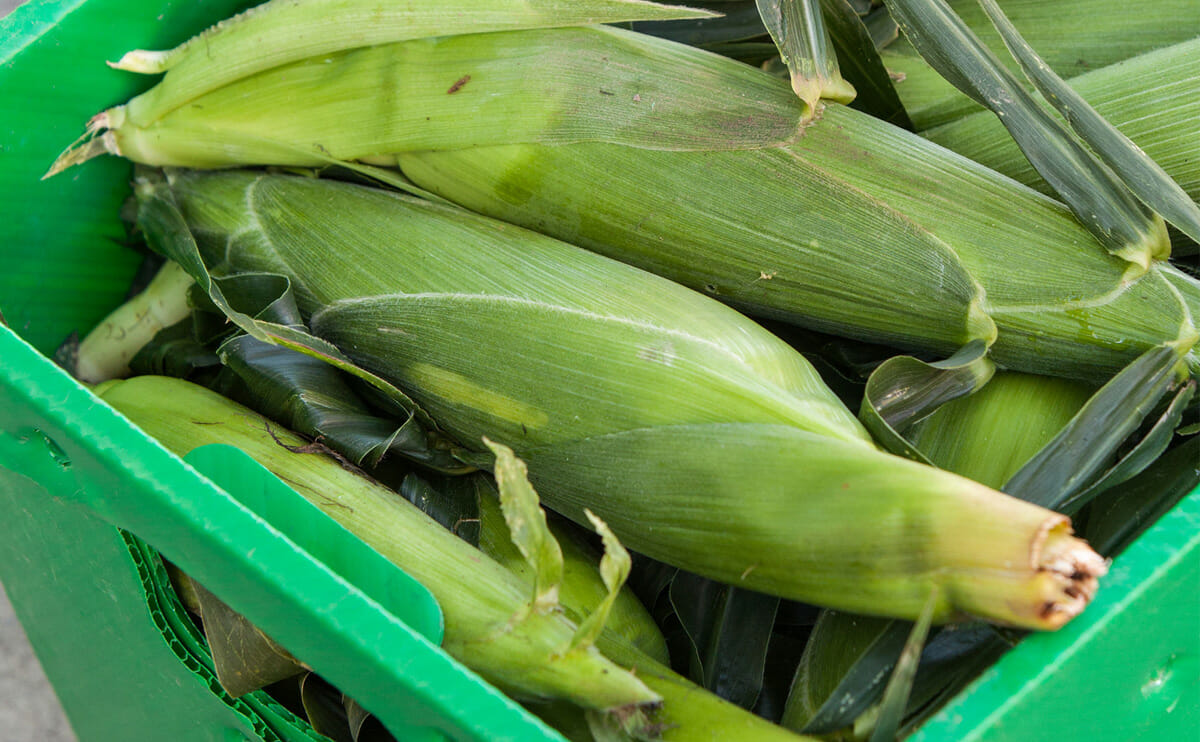 Peter Murray and his wife Raymonde run Pete Murray’s Corn Farm in Chase, British Columbia, an 80-acre affair where they also grow strawberries and potatoes, raise livestock, host wagon rides and run a pumpkin patch. But corn is their main business. (The Murray’s even got married in a field of corn.) They sell most of their corn at a roadside stand, but also supply a few local green grocers. Peter took some time out of his busy harvest schedule to talk to Modern Farmer about corn.

Modern Farmer: How did you become a corn farmer?

Peter Murry: Oh, that’s quite a story actually. I do not come from a farming background. In my youth I was working on a local farm that grew various vegetables and there was a couple that owned it. And one of the owners was actually killed by a train on his tractor, if you can believe it. And his wife phoned me that winter and asked if I wanted to lease the farm and that’s how I got going.

MF: What made you want to be a corn farmer?

PM: Working on the farm in the summer, I enjoyed it. My folks had bought a small hobby farm and I just enjoyed the work that we did and this opportunity came up and it was a fit, I loved it. That was 45 years ago.

MF: How big is your farm?

We plant approximately 80 acres right now. Sweet corn is our main crop but we also do on a smaller scale strawberries, potatoes and are now doing agritourism. We invite school groups and people onto the farm and take them for wagon rides and tours and they get to feed corn to our sheep and then we take them to the pumpkin patch, they pick a pumpkin, and away we go.

MF: So what is harvest time like for you? Can you walk me through it?

We sell probably 70-90 percent of our crop at a roadside stand. And we pick fresh daily. So it’s seven days a week from when we start, generally in early August, and we’re picking daily until the season’s over.

It’s done 100 percent by hand. I get up about 6 a.m., my picking staff arrives about seven. We open our stand at eight. I try to get the staff out of here around 3 o’clock in the afternoon. And then I’ve still got fieldwork to do. We have plastic garbage cans that we drag between two rows so you pick two rows at a time. Then we throw it on our shoulder, take it to a truck and then we put the corn into black boxes, five or six dozen in each box, we take those up to our stand.

MF: What doesn’t make it to the stand?

PM: There are some that are too small. One problem we do have here are birds, Red-winged Blackbirds and starlings can do a fair bit of damage and they peck at the top of the crop and if they take 5 or 6 kernels that cob is no longer usuable or sellable, so it’s left behind. If we have time, we will harvest a bunch of that and feed it to the sheep.

MF: What is the secret to growing really great corn?

PM: Having the right fertility of course, but even more important is when you pick it. Make sure you’re picking it at the appropriate time. And that’s as scientific as eating it each day you pick it to make sure its still good. Raw corn is as good as you’ll get you won’t improve it by cooking it.

This year I had about eight varieties and I plant them over a month and a half time period to try and spread it out so when one variety ends you’re into the next one. And we try to stretch it out to September and if at all possible right up until frost shuts us down. Some of the later varieties are better for canning and freezing, their sugar content is higher and the actual cobs are bigger so your value is better.

All different varieties have different flavors, of course, and different variation in the sweetness. You want to have it ripe enough so there is flavor but not so ripe that it tastes like cardboard. If it’s too young there isn’t a lot there, the kernels are too small, there’s not much flavor. You’ve got four or five days its ideal in which to pick, get it on the stand, and get it sold.

MF: What are some things that surprised you about growing corn when you first started?

PM: I guess the amount of work! Which is fine. The way we do it, you are harvesting every day. We don’t have a cooler. We don’t pick a whole bunch and throw it in the cooler and eek it out over several days. We just pick every day.

MF: Do you ever get tired of eating corn because you’re around it so much?

MF: What are some of your favorite ways to eat corn?

PM: Well, as I said raw, and we’ve started to put it on the barbecue more often. And those are our two main styles. We do process some for ourselves. We freeze it by blanching it briefly in ice water, cutting it off the cob, and putting it into bags and into the freezer. And then you can bring it out and have it as a side dish or put it in soups.

1. Heat the oil in a large stockpot over medium-high heat. Add the bacon and cook until crisp, about 5 minutes. Using a slotted spoon, transfer to paper towels to drain. Leave the bacon drippings in the pot. Reduce the heat to medium and add the butter, onion, and celery; cook until the onion is soft and translucent, about 10 minutes. Add the garlic and cook for 1 minute.

3. Add the corn kernels, milk, basil, and dill and return to a simmer. Continue cooking until the corn is just tender, about 5 minutes. Discard the bay leaf and season with salt and pepper to taste. Sprinkle with the diced bacon, and extra basil or dill, if desired, and serve.