Welcome to Modern Farmer's harvest column, in which we highlight what is seasonal, talk to those who grow it, and share a recipe (or two). This week: chili peppers. 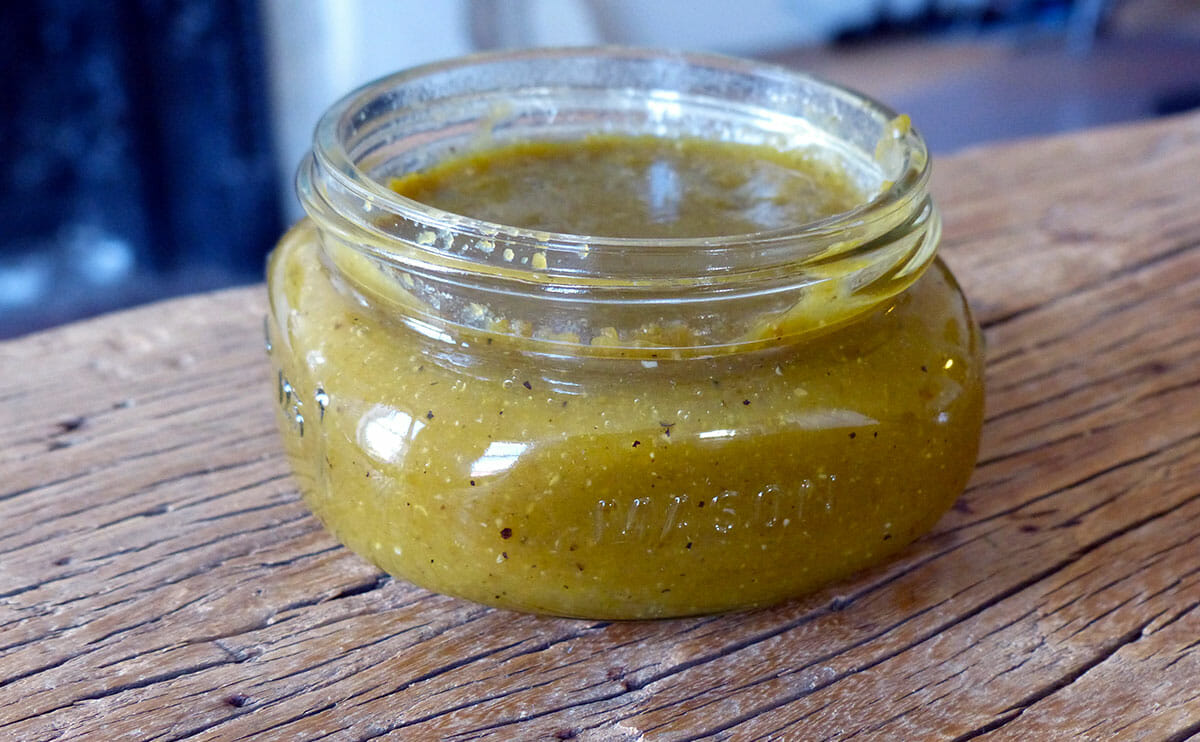 When growing your own chili peppers, it’s important to know that they get hotter with the weather and a hot summer will produce the sort of incendiary pepper that leaves a lasting impression. Scientifically, chilies’ heat is evaluated on the Scoville heat index, a measure of the capsaicin ”“ the true spicy power ”“ in the pepper. But I have my own index. Is my upper lip sweating? Is the top of my head numb? Are my ears tingling? Am I standing in front of the refrigerator gulping down a quart of cold milk in an attempt to put out the raging fire? This is the life of a chili gardener. Uncertainty, peppered with reckless abandon.

Chili peppers run with the fast crowd in the garden. With bees as enablers, there is wild, uninhibited cross-pollination between chili pepper varieties unless planted at least a half mile apart. Because heat levels range widely between varieties, this means that, unless the garden is planted with only one type of chili, it is almost impossible to control the Scoville heat in a homegrown chili pepper.

How to Process Cans in a Water Bath

Naturally, in a hot, preferably dry, summer season, chili peppers are happy garden residents. They flower in mid-summer and continue bearing until frost. With very little help, they produce a boatload of chilies. The only challenge? The peppers arrive at the end of the growing season. They turn red. They soak up the late summer sun. They get hotter. Jalapenos pack a surprising punch. Poblanos are a little zestier. And it’s like Russian Roulette with the padrons and shishitos. For me, an avid home food preserver, all this abundance arrives just when I have already been canning hundreds of pounds of tomatoes and, frankly, I’m a little worn out. But there they are — a few dozen chilies still holding on in late September and early October.

I’ll spend an evening with a big needle and fishing line or sturdy cotton thread stringing peppers for drying, carefully knotting between each pepper to improve airflow. The long strings of mixed chilies dry over time, needing only a space with low humidity. Mine hang in a dark corner of the garage where the autumn temperatures rarely range above 55°F. By early December they are thoroughly dry and ready to be stored in jars for the winter, to be plucked out and crumbled, or rehydrated, as needed.

If you’re not handy with a needle and thread, or have no appropriate spot to dangle a string of drying peppers, thank goodness for hot sauce, one of the easiest of all preserving projects. If you have been meaning to try your hand at canning, this is straightforward, inexpensive, and makes a great holiday gift (that is, if you’re willing to part with this precious elixir).

It’s hard to believe that, until a few years ago, I thought hot sauce was strictly for a Bloody Mary or hot wings, but otherwise, it was no big deal. Then Sriracha came along: that sweet opening salvo ending with a slam-dunk of heat. I combined it with mayonnaise, added a squirt to marinades, plopped a few drops on my morning eggs ”“ well, essentially, stirred it into pretty much everything. After a while, however, I looked at the ingredient list. That’s an act I do not recommend if you intend to continue to consume it.

I had to find a way to make my own. I discovered a few recipes online, and made several batches, playing with the ratios, the chilies, the vinegars and the sugars. Soon, I began asking other DIYers what they were doing, researching chilies, chatting up farmers at the markets, looking for the perfect chili pepper to make hot sauce. There is an entire culture of hot sauce makers out there. They are obsessed. I get it.

Because of my fondness for hot sauce, I grow as many different chilies as will fit in my small garden, usually whatever plants I find on the table at the farmers’ markets in early summer. In many cases, these plants are mystery chilies, either mislabeled or not labeled at all. I’ve learned to roll with it, using the internet to identify the variety once a pepper appears. Chilies thrive in any garden, but a longer summer and more sustained heat offer the best growing conditions. Keep in mind: Many chilies gain a crimson hue when left on the plant to ripen, turning the pepper slightly sweeter, too.

Hot sauces are often fermented and may be made with fresh, charred, or smoked peppers, and even dried chilies. There is usually vinegar and some sort of sweetener, and it’s the balance of three elements — the sweet, the acidic, and the hot — that makes for a tingly blend. Green chilies, like jalapeños and serranos, make a khaki colored, dusky sauce, while fresnos and cherry bombs make a vibrant red version.

One word of warning: Only dilution will reduce the Scoville heat. Balance is key. I know. I’ve made hot sauce that scared me. Hot chilies may be combined with sweet or mildly hot peppers for one variation on a hot sauce that won’t terrify the heat-sensitive. Fresnos pair happily with Anaheims, Habaneros and Jimmy Nardellos are good companions. Italian Bull Horns are mild and balance Santa Fe’s heat. But these are only guidelines, as every summer, whether dry or rainy, blisteringly hot or crisp and cool, will define the nature of those peppers.

Here’s what I have learned: Every chili pepper makes great hot sauce. Every single one. Look in the market, or in the garden, gather what’s there, and make up a batch, knowing full well that you will never be able to replicate it. That’s okay. Think of your hot sauce like vintage wine. And if it’s a very hot summer, it’s going to be a very good year.

This hot sauce should come with a steel band. It’s complex and searingly hot and spectacular brushed on fish or chicken headed to the grill. Wear gloves when dealing with chili peppers. If you have no gloves, coat your hands thoroughly in any cooking oil before working with hot chilies. The oil dilutes the peppers’ oil, which is where the skin irritant resides. To control the heat in the sauce, remove the seeds before the first brine, and to increase the heat, toast the seeds, then add them to the mixture.

In a dry, heavy, cast iron pan on high heat, char the jalapeños and garlic until blistered on all sides, six to eight minutes. Place the charred chilies and garlic in a bowl and cover with a tea towel to steam for ten minutes.

Wearing gloves, stem and roughly chop the chilies. Remove or retain the seeds, depending on your tolerance for heat. If keeping the seeds, toast them lightly in the dry, cast iron pan. (see headnote)

Combine the vinegar and salt in a one-quart jar with cover. Shake or swirl to dissolve the salt. Add the chopped chilies and garlic, cover and leave overnight on the counter.

Put the vinegar mixture in a 3-quart heavy, non-reactive pot. Add the honey, dried pineapple, mustard and ginger. Cover and bring to a strong boil for three minutes. Do not stand over this pot and breathe in the scent ”“ it is unbearably irritating to the sinuses and the eyes and just not fun.

Puree the slurry in a blender, in batches, being cautious not to overfill the beaker. Run the blender for several minutes (depending on the strength of your mixer’s motor), until thoroughly smooth.

Press the mixture through a fine mesh strainer back into a 3-quart pot. If you find there are still large pieces of chili or garlic remaining in the strainer, put them back in the blender and continue to puree.

Return the pureed hot sauce to the pot and bring it back up to a boil for five minutes. Dip the tip of a spoon in and taste just a drop. It’s mighty powerful, or should be. If you want it to be a little sweeter, add honey by the teaspoon, stir and taste again.

The hot sauce is shelf stable for one year. It may separate; shake well before using. If you have created a sauce that is just way too hot, there is a way to reclaim it. After opening the sealed jar, to every four ounces of hot sauce, add one tablespoon vinegar (or beer or bourbon or water), shake well, and store in the refrigerator.