Smashing Pumpkins: A Cultural History of a Halloween Tradition

How the wonton destruction of pumpkins became a Halloween tradition. 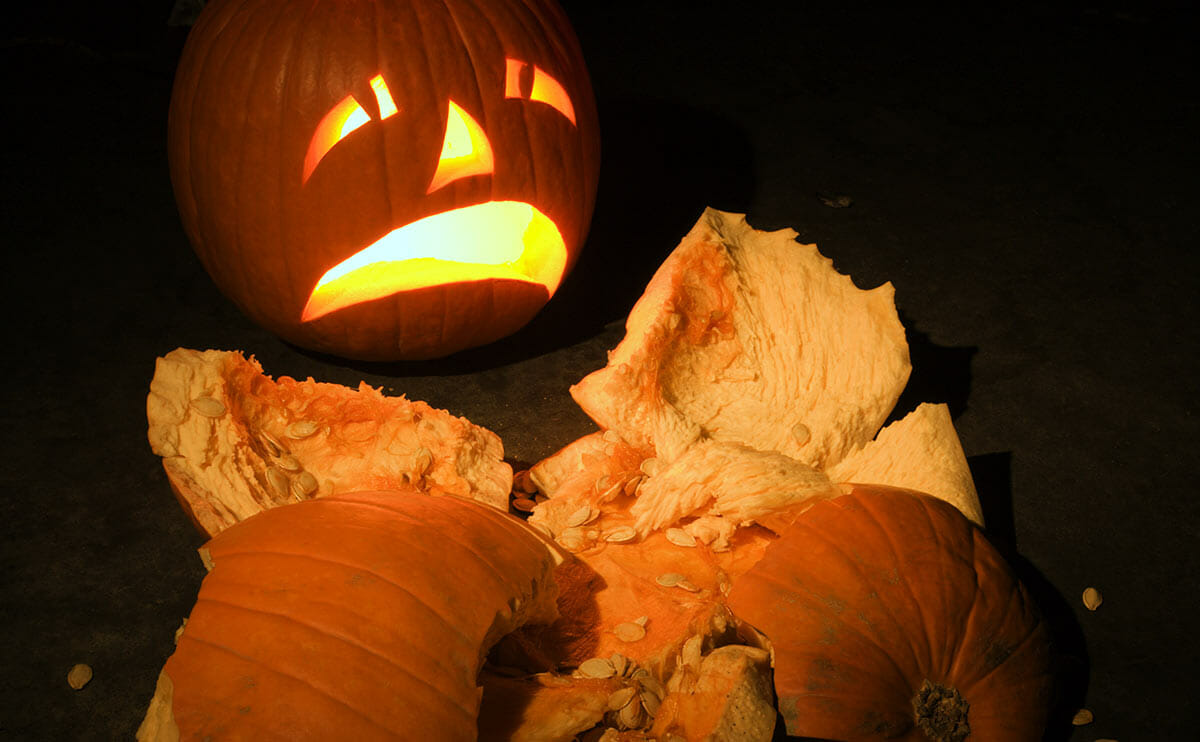 I was born on Halloween. My grandfather moonlighted as a pumpkin farmer. Early in October every year, my two younger brothers and I would pull the fattest, roundest pumpkins we could find straight from the field, and flaunt them on our front porch — it was my Halloween birthright, after all.

But all the fall pageantry collided with reality in middle school, when our porch became a pumpkin smasher’s mecca. Boys braved a journey 8 miles out of town to transform our lawn into a minefield of orange shards and sinewy guts. It happened like clockwork every year: the Great Pumpkin Massacre.

The memory of those orange carcasses strewn across our front lawn has stayed fresh over time. So, I recently dove into the annals of Halloween history to see how this inane, and yet, somehow irresistible tradition of pumpkin smashing has dug into our cultural flesh.

The pumpkin forged its bonds to autumn in America via Irish immigrants, who brought along the harvest ritual of carving lanterns out of beets or turnips (and called them “jack-o’-lanterns,” after a fabled trickster named Jack who conned both God and the Devil and was denied entry to both heaven and hell, then began roaming the Earth with just a light burning from a turnip). The pumpkin was an indigenous American surprise for the Irish, who couldn’t get over how big and cavernous its hollowed-out insides could be. When it came time to choose a fall vegetable to stick a candle in, pumpkins easily beat out the meager turnip, and pumpkins became the lantern of choice.

The first mention of a link between jack-o’-lanterns and Halloween was in 1866 in an Ontario paper, and for a few decades, the pumpkin seemed to enjoy a period of relative peace. But that would change.

The first mention of a link between jack-o’-lanterns and Halloween was in 1866 in an Ontario paper, the Daily News, and for a few decades, the pumpkin seemed to enjoy a period of relative peace. Boys of the day still got kicks out of things simpler than pumpkin smashing; a November 5, 1899, cartoon supplement to the St. Louis Post-Dispatch painted the youngsters as feeble villains, guilty of only the most trivial Halloween crimes like “staying out nights,” ringing doorbells, catching a ride behind ice wagons and getting into sugar bowls.

But (perhaps) the gravity of world events in the early 1900s and the onset of World War I pushed vandals’ defiance to more devious extremes.

“A new brand of mischief emerged in the 20th century,” writes Lesley Pratt Bannatyne in her book “Halloween: An American Holiday, an American History.” “By the 1920s, October 31st mischief became known as ‘the Halloween problem’ and many adults began to question the need for a holiday that encouraged pranks and anarchy.”

Though specific mentions of this type of “pranks and anarchy” are absent from literature, it can be safely assumed that by this time (if not before), relations between boys and pumpkins began to sour. Eggs, another satisfyingly smashable food, became commonplace ammunition at Halloween, making it likely that pumpkin smashing also found its beginnings.

Kiwanis and Lions clubs, PTAs and other community-minded groups collaborated to re-brand the holiday in the 1920s and 30s, breaking with the tradition of naughty “tricks” to turn the tide toward more charitable activities like raking leaves or giving food to the poor. The Delineator (a newspaper of the time) even backed up the new do-gooder spirit of the holiday by invoking the “good fairies, elves and sprites” ”“ the original pagan inspirations for Halloween ”“ “whose concern was the making of folk happy rather than miserable.”

The campaign was met with some success, for a while. But vandals’ appetites for mischief, and destruction, came roaring back over the next decades.

By the end of the 20th century, pumpkin smashers had inserted themselves as Halloween mainstays. As public distaste for the destruction of property and innocent tradition grew, the crimes appeared more frequently as odd asides in police blotters:

A group of four men in their late teens or early 20s were smashing pumpkins on 12th Street. The caller said she caught one of the suspects, who was wearing angel wings, on her patio…

Four teens were questioned after police responded to a rash of reports of damaged pumpkins, which unfortunately ended in a man’s storm door being smashed along with his pumpkin…

And in what might be the biggest pumpkin smashing ring of all time:

Six 17-year-olds and one 16-year-old boy were arrested Monday night for stealing about 60 pumpkins with a total value of $150 from residents’ homes. [Police Captain] Utz said they were subsequently smashed at three residences.

Although there are no official figures on arrests or sentencing for pumpkin crimes, Police Sergeant George Wheeler of Lawrence, Kansas, reported to the local newspaper in 1996 that “a bunch” of kids are detained each year — though it appears most are released to their parents. In at least one case, in Orange, Connecticut, the guilty party was charged with third-degree criminal mischief and interfering with an officer and held on a $1,000 bond.

Out of the vandal sport, though, a cottage industry of organized pumpkin smashing has risen. “Family events” all over the country combine ingenuity with the base pleasure of seeing something busted to bits.

It may well be that pumpkins sit among the ranks of Bubble Wrap and water balloons, their innate structure proving irresistible to our own tendencies toward destruction.

The World Championship Punkin Chunkin Association, whose Delaware event has a cult following — and its own hashtag (#punkinchunkin) — sanctions around 50 pumpkin-throwing festivals each year. Air cannons, trebuchets, catapults, rowing machines, treadmills and other contraptions are employed in the pursuit of the longest “chunk.”

Frank Shade, director of media and promotions for the association, reaches to Freudian rationale to explain humans’ fascination with exploding pumpkins. It’s our youth revisited — that, and the pumpkins are really asking for it.

“It starts at childhood,” Shade says. “You take a child when he’s born and you stuff the binky in his mouth and he throws it out. You set him in his high chair and give him food and he throws it off — it all has to do with throwing something. Then here’s this perfectly round, beautiful cucurbit that says, ‘Smash me!’ And the boy actually comes along and does that pumpkin a favor, puts it out of its misery.”

Filmmaker Devin Graham may have come the closest to allowing us to understand just what it is that will keep us hurling pumpkins for as long as they’re around. His footage of pumpkins smashing in ultra slow motion at 1,000 frames per second is hypnotizing and beautiful. Perhaps pumpkin smashing happens simply because, you know, it kinda looks cool.

Or it may well be that pumpkins sit among the ranks of Bubble Wrap and water balloons, their innate structure proving irresistible to our own tendencies toward destruction. What is certain: More Great Pumpkin Massacres await us.