Fruit Testing Technology Tries to Catch Up With Our Mouths

Consumers' savviness towards and demand for the choicest fruit, research suggests, means the industry has to upgrade its qualitative testing for firmness, 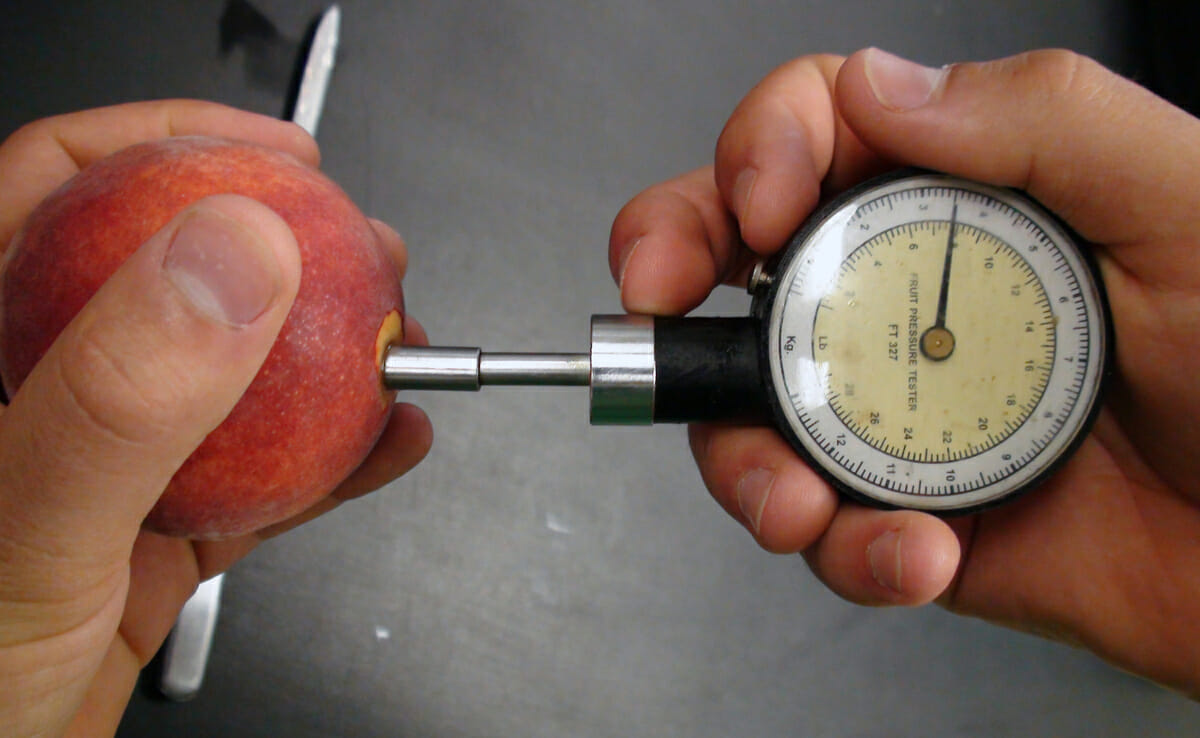 By biting into that peach, you’re collecting information that growers wish they could get ”“ How sweet is the flesh? How firm is the skin? ”“ without actually having to take a bite. Sorting for size and shape happens along conveyors belts quite efficiently in the packinghouse. But tests for taste and firmness in the field are time-consuming at best. At worst, the farmer ends up with a completely destroyed product.

Consumers’ savviness towards and demand for the choicest fruit, research suggests, means the industry has to upgrade its qualitative testing for firmness, which is one of the best measures of ripeness. The race to create technology that can provide farmers with alarmingly detailed data about the firmness of the fruit in their fields is on. In recent years, researchers have trotted out everything from advanced imaging technology to acoustic vibration devices.

“Firmness is important to peach growers because it helps growers decide how to market their fruit and how long it can be stored at different temperatures,” says Dr. Desmond Layne, professor of pomology at Washington State University and leader of the school’s Tree Fruit Extension Program. At his former post at Clemson University, Layne created an Internet clearinghouse for all things peach ”“ “Everything About Peaches” ”“ which explains the inner workings of peach production. In an email, Layne wrote, “Firmness is critical for fruit that will be handled in a commercial packing shed, boxed, and shipped long distances by truck or ship. The firmer a fruit is, the more durable it is and less susceptible to bruising.”

To hear the makers of firmness testing technology describe it, the old way of testing fruit isn’t accurate enough to ensure consumers get what they desire each trip to the produce aisle.

The industry standard test is a device called a penetrometer, a handheld meter taken into the orchards or fields. A small chunk is taken out of the skin, and an 8mm probe is pressed into the exposed flesh. Growers also use a refractometer to measure sweetness. It too leaves the produce unsaleable. Penetrometer tests are not performed on every fruit, of course, but on samples that are meant to be representative of a portion of the harvest. The loss is negligible, but more importantly, the data provided isn’t as nuanced as growers want. Efforts are underway, and succeeding, to replace the penetrometer.

“Because they are destructive, manipulated by hand, and are somewhat slow to operate, scientists have been trying to develop non-destructive technology that can estimate or measure the same parameters that not only are accurate but fast ”“ even so fast that they could operate on a commercial packing line so that fruit could be separated based on firmness or sugar content by machine at high speed,” says Layne.

Attempting to replace the penetrometer, scientists over the decades have rolled out acoustic vibration devices and spectral imaging doohickeys. They’ve even produced magnetic resonance equipment (yes, MRI) so they can basically catscan produce. Many of these experiments have proven effective, just not so employable. It’s not practical to drive an MRI machine into an orchard, and acoustic vibration sensors aren’t suited to life along a packinghouse line. What works in a sterile laboratory doesn’t quite translate to the workplace.

A study of pears back in 2005 pitted three newer technologies against the penetrometer, including something called a “pneumatically actuated firmness tester,” a test that exerts air pressure onto fruit skin and obtains data electronically. Of the three products tested, only one could be operated outside of a laboratory. The durometer, a handheld hardness-measuring device normally used on plastics, tested closely in accuracy to the penetrometer, but without the bruising.

Scientists over the decades have rolled out acoustic vibration devices and spectral imaging doohickeys. They’ve even produced magnetic resonance equipment (yes, MRI) so they can basically catscan produce.

Non-destructive testing isn’t just a goal of the fruit world, and it’s not just about firmness. Researchers trying to grow the sweetest and least pungent Vidalia onion are in the same boat. Down in the 13-county Georgia region where Vidalias are grown, scientists are wrapping up a four-year-long study to find new ways to ensure outgoing crops meet consumer tastes.

Old tests conducted in the Vidalia fields essentially crushed an onion, pulverizing it and testing the quality of the acids and enzymes that induce tears, qualities breeders want to minimize. Such measurements were effective in singling out plants for breeding, but destroyed crops. Like other crops, onion researchers want non-destructive, accurate tests. Crushed onions just won’t do. A possible solution? Infrared scanning is among the new, non-destructive methods researchers are examining to finally nix onion smashing in the quest for perfect pungency.

Infrared scanning might replace the peaches’ penetrometer, too. Scientists at the University of Bologna, Layne noted, have developed the DA meter, a handheld device using the near-infrared spectrum to measure chlorophyll, which decreases as the fruit ripens, giving growers an accurate portrait of ripeness. Using AAA batteries and a standard memory card, the DA meter “can be used to even measure maturity of fruit nondestructively while they are still on the tree.” The DA meter is also a component in a camera and computer-assisted automated packinghouse version.

When it comes to testing quality in the apple family, the science begins long before harvest. Growers look for crisp and firm apples, fruit that will withstand long-term storage ”“ a desire best addressed by breeding. The USDA in 2009 arranged funds for a project specifically devoted to improving fruit quality in the Rosaceae family, which includes cherries, apples and strawberries. Assessing an apple, for example, still takes place post-harvest, likes onions or peaches, and DNA testing has only recently come into practice. DNA testing, though, promises to be most helpful to researchers trying to better categorize breed characteristics. A big part of an apple scientist’s job is breeding new apple varieties ”“ new fruit breeds that are best designed for Washingtonian or New England soils. DNA testing gives researchers an idea of what qualities the new breed of apple will exhibit, even before it appears on a branch. Before an apple tree flowers, researchers can test leaves to accurately select which varieties will, for example, best survive storage.

Consumers have a threshold level for apple texture, explains Katherine Evans, an associate professor in Washington State University’s apple breeding program. If the fruit is too mealy, consumers turn their nose up at it. It’s especially helpful if growers can test their produce before it reaches the packinghouse. Testing pre-harvest helps growers not only predict the perfect harvest time, Evans explains, but identifies any stress the fruit underwent on the tree to degrade quality. “The grower would be able to decide which lot of fruit to market first and which has the greatest potential to store for longest without losing quality,” Evans says.

As any farmer knows, getting results takes time, and the same goes in the race to replace the penetrometer.

“You’ve got to produce a tree before you get the fruit,” says Evans.

Pictured Above: A penetrometer in use on a peach. / Desmond Layne