Pearl of a Deal: Meet the Oyster CSA

Longtime local aquafarmer and restaurateur, Luc Chamberland has launched what may be California's first oyster CSA, Community Supported Aquaculture. Same concept as the age-old cardboard veggie box, except instead of parsnips and eggplant, you get an ice-packed cooler full of briny, sweet Pacifics - and the opportunity, as Chamberland puts it, "to get mud between your toes.” 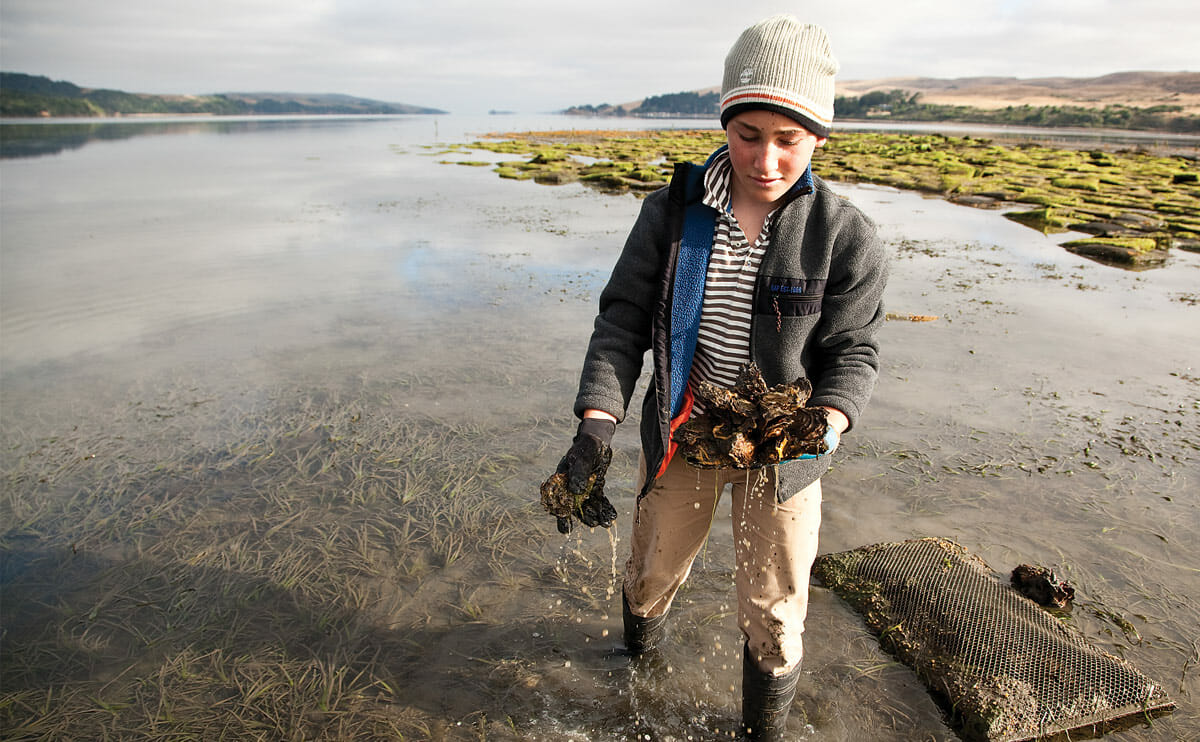 They come by the carload, ready-to-shuck, carting screw-top bottles of sauvignon blanc and hunks of Cowgirl Creamery cheese. On any given (sunny) weekend in Northern California’s Point Reyes National Seashore, the ramshackle farms that line the gently lapping edge of Tomales Bay are overrun with oyster lovers.

But hidden along the eastern shoreline, between Hog Island Oysters and Tomales Bay Oyster Co., (both well known outposts to oyster aficionados) is a tiny, acre-and-a-half mudflat accessible only by boat or unmarked hiking trail – and not open to the public. There are no barbecue grills or logo-emblazoned T-shirts or rowdy groups. Just rows of mesh bottom bags filled with oysters, quietly growing, getting ready to be harvested. Perhaps by you.

Longtime local aquafarmer and restaurateur, Luc Chamberland has launched what may be California’s first oyster CSA, Community Supported Aquaculture. Same concept as the age-old cardboard veggie box, except instead of parsnips and eggplant, you get an ice-packed cooler full of briny, sweet Pacifics – and the opportunity, as Chamberland puts it, “to get mud between your toes.”

“People think oysters are this prestige food, but we’re just farmers, like everybody else”

Chamberland has been running a small, informal version of a CSA for about two years, for friends and family. But now he’s ready to kick into high gear and accept large-scale membership, starting after Thanksgiving this year.

Inspired by a small Washington community shellfish farm working to restore Puget Sound, Chamberland wanted to bring something similar to West Marin. So a couple of years ago, he subleased the little plot off Tomisini Point from his friends over at Tomales Bay Oysters, for the sole purpose of educating people about oyster farming and the bivalve’s crucial role in maintaining a healthy aquatic ecosystem. He’s since done a few small harvests and hands-on tours for friends and family, mostly Bay Area locals but some “obsessive oyster lovers” from New York to Los Angeles, as well. Turns out, people love slurping and learning.

Even kids. In conjunction with the East Bay’s Watershed Project, Chamberland regularly brings out under-served youth – he gives them rubber boots and a peek at what oyster farming is all about. (Plus, he laughs, ten cents for every, Atlantic oyster drill, an invasive snail that decimates oyster populations, they happen to find under the shells.) “Most of these kids are obese, they buy their food at the corner liquor store. I like to take them out on the bay and show them where food actually comes from,” says Chamberland, standing among the eelgrass in knee-high rubber boots himself. “There’s nothing better than seeing a six-year-old suck down a dozen oysters.”

Or, how about a hundred? Pickleweed plans to offer two types of membership. Everyone gets 100 oysters for $100 (or 50 for $50), but only “active members” (100 people, max) get to play “Oyster Farmer for a Day.” Chamberland will take groups of eight out on his boat, talk about different growing techniques, teach you how to seed baby oysters. You’re invited back mid-year to shake sediment and check on the progress of your stash, and then return for harvest, and a bayside oyster feast.

“Non-active members” are equally invested, just a little lazier. They also support Pickleweed’s efforts by paying in advance, like a traditional CSA, but come to pick-up their oysters, and have a beer, on the designated Farm Day. Shipping oysters by mail would require jumping through regulatory hoops, so for now, he hopes to keep it local. Or to anyone who wants to make the trip. His first harvest should yield roughly 10,000 Pacific oysters; the kumomotos will take another year. He expects to have more product than members. “I don’t want it to get too big,” he says. “Or it will lose its meaning.”

The ultimate point is not making a profit, he admits. “People think oysters are this prestige food, but we’re just farmers, like everybody else,” he says. ” It’s not a bacon-of-the-month club, it’s all about the experience. I want people to come out here and see the beauty of the bay and understand that wilderness is great, but so is growing your food. I want them to stop and think.” He pauses. “And at the end of the day, if I plant a seed in someone to become an oyster farmer… I don’t care if ten more show up on Tomales Bay. The more the merrier, in my mind.”