A New Field for Art

The first gently rising hill at Woodland Farm – a 1,000-acre property located outside of Louisville, Kentucky – seems normal enough. And then comes the steep downslope. Tipping the crest, a battalion of giant bubblegum-pink snails greets you on the other side, some of them rising over 10 feet into the air, lining both sides […] 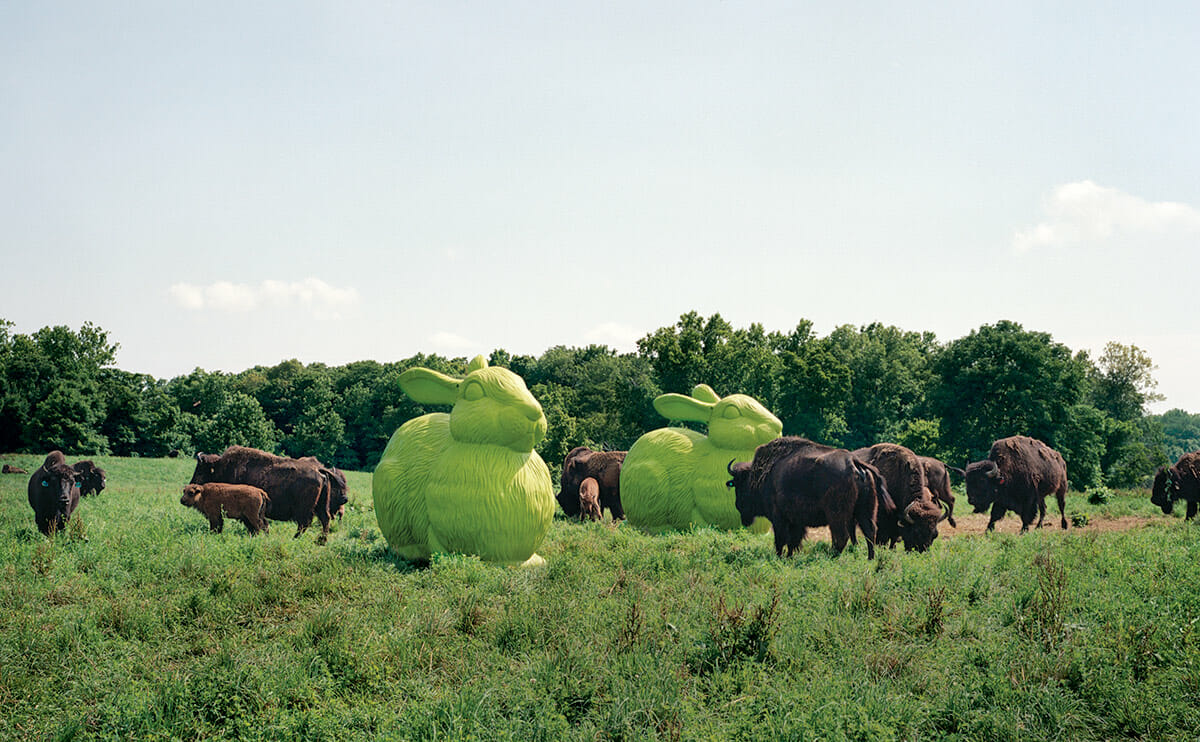 The first gently rising hill at Woodland Farm – a 1,000-acre property located outside of Louisville, Kentucky – seems normal enough. And then comes the steep downslope. Tipping the crest, a battalion of giant bubblegum-pink snails greets you on the other side, some of them rising over 10 feet into the air, lining both sides of the road.

It seems almost too absurd to be real, but nearby, buffalo munch on grass, oblivious to the fact that they are standing next to pieces of contemporary art that go for $17,000 a pop.

Titled “Pink Snails” and fashioned from recyclable plastic by the European collective Cracking Art Group, it’s one of dozens of pieces of art scattered around Steve Wilson and Laura Lee Brown’s farm and house. The married couple, who conceived a chain of art-gallery-boutique hotels called 21c Museum Hotels, have created their own “art farm,” a place dedicated to mixing creative practice with organic farming. This ethos spills over to their hotels and restaurants, whose art-covered walls double as galleries, injecting whimsy and contemplation into the lives of visitors and employees.

As Stephanie Tittle, the farm’s greenhouse manager puts it, “We work in Neverland.”

Art and agriculture have always had a relationship – pastoral landscapes continue to inspire – but rarely does one see, while walking toward the greenhouse, a bright-red plastic alligator posed as though creeping into a nearby pond. Farms might be having something of an artistic moment, though. The most recent Art Basel gathering of gallery-world pundits and buyers held a panel titled (not at all abstractly) “The Artist as Farmer.” The moderator got the idea for the theme after talking to architect Rem Koolhaas, who notes that “the future is the countryside.” This year, Los Angeles-based artist Fritz Haeg will be completing his “Edible Estates” project, where he planted public gardens at 15 different family homes around the world. It’s the first part of a trilogy of works dedicated to the intersection of art and nature. And, in rural Sweden, there is the WanÁ¥s Estate – a privately owned castle with a 10,000-acre park, dairy farm and sculpture art garden accessible to the public. The goal is to open up a new way of thinking about what we consume, both visually and agriculturally.

When placed together, art and farming can have a symbiotic relationship. According to Charles Wachtmeister, CEO of the WanÁ¥s Estate, it was the influence of artists’ “tactile” practices that pushed the farm to go organic, a changeover that started in 1997, a decade after their first exhibit. “I am not sure that we would have taken the step into converting the farm from a normal production to organic if we had not started to work with artists,” Wachtmeister says.

The art-on-the-farm movement has birthed other surprising business campaigns. Back in Kentucky, Wilson and Brown started their art farm in the late ’90s – one that now helps feed the restaurants of their own art-packed hotels – without any particular guiding purpose, save for their burgeoning love. They bought Woodland Farm before they had even married, and then started using it as a repository for their joint art collection. “Our collection was growing and growing. We like to change things out. We like to live with our art,” Wilson says – adding that, when hosting events, they were getting some shocked reactions to their ultra-up-to-date tastes. (When I visit the main house on the Woodland estate, I see a Mickalene Thomas video-and-painting installation piece titled “Oh Mickey” in which a model sings the famed Toni Basil anthem, naked save knee socks and heels.)

After living on the farm for a few years, the pair wanted to create public spaces to showcase their passions. They bought several properties in Louisville’s depressed downtown area then opened up a successful art-hotel fed by their original art farm. Wilson cites high occupancy rates at the first three 21c Museum Hotels with some pride, and he looks forward to the development of the next two, currently in the design stage.

Not every collision between artwork and farm work is deeply meaningful, perhaps. Some installations on Woodland Farm work just as cute jokes – like a video of a horse being led to a salt-lick, displayed inside a barn. But that’s not considered a bad thing, among management. Both art and farming are unpredictable ventures, vulnerable to market factors beyond anyone’s control. Why not embrace the chaos? Toward the end of my visit, when I spy a dented, well-worked flatbed truck zipping around the property, carrying a huge pair of “Green Rabbits” by Cracking Art Group, I don’t break stride.

Tittle’s advice on working amidst such absurdity seems apt. “Don’t be frightened,” she says, “just ride it.”

Molly Birnbaum
Not only grows on Woodland Farm. The 1,000-acre grounds also grow some serious produce – much of which is served at the 21c Museum Hotel’s restaurant, Proof on Main, in Louisville, Kentucky. “The fact that it’s an art farm adds to the whimsy and magic of the place, but the produce rivals anything that I’ve ever seen,” says executive chef Levon Wallace. While Woodland has been a working farm for more than 150 years, it was only when Laura Lee Brown and Steve Wilson purchased it in 1996 that the emphasis shifted not only to art but also to sustainable agriculture. Today, they use no-till planting to grow vegetables in raised garden beds (sans chemicals), feed insects sourced from the orchard to their chickens and provide Proof on Main diners freshly picked greens, carrots and onions year-round from their heated greenhouse. Bison (for a renowned burger), three breeds of heritage pigs and free-range organic hens (for multicolored eggs Wallace loves: “Every day I see those eggs and I’m like ‘whoa’ ”) provide hotel guests with plenty of options. When the farm is fully producing, 75 percent of Proof on Main’s ingredients come from Woodland, says Wallace. WanÁ¥s Estate also mixes high art and real farming. The Swedish park clocks in at 250 acres of pasture and 650 of plowed fields. It has three breeds of cow that produce 3,000 tons of organic milk annually. Some of the milk is sent to schools and stores around southern Sweden. Does art influence food? Certainly, says Wallace, who loves to look up from picking tomatoes in Woodland’s garden to see that he’s standing next to a giant pink snail sculpture. “Whether you’re aware of it or not, your environment plays a huge role in how you perceive things. When you’re surrounded by creativity, your thoughts are provoked. It’s subconscious,” he says.
Share
Tweet
Pin
Email
2K Shares
Share
Tweet
Pin
Email
2K Shares
Sign up for your Modern Farmer Weekly Newsletter
Subscribe

[…] bears placed aside the United Nation building and their red snail in Central Park. These monumental works are also placed in rural landscapes, like the gentle hills of Woodland Farm in Louisville, […]

0
Reply
A “Sparkle” Within a Landscape – Romanticism at SU

[…] bears placed aside the United Nation building and their red snail in Central Park. These monumental works are also placed in rural landscapes, like the gentle hills of Woodland Farm in Louisville, […]