Maryland's Goatman Is Half Man, Half Goat, and Out for Blood - Modern Farmer
Animals, Lifestyle

Maryland’s Goatman Is Half Man, Half Goat, and Out for Blood

Some say Goatman was a man who kept goats and went mad after teenagers killed his flock. Some say Goatman was the result of a mad scientist is conducting experiments on a goat when something went horribly wrong. All agree that he haunts the woods of Maryland, and he is out for blood. 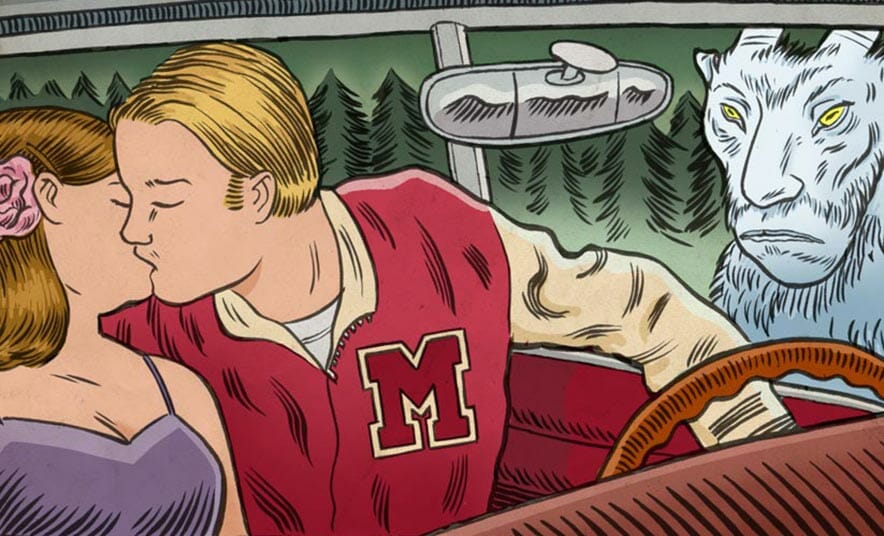 When scared teenagers whisper about Goatman, not all agree on the form he takes. Some say he was a man who kept goats and went mad after teenagers killed his flock, driven to seek revenge against any youngster. But perhaps the most titillating version traces the origin of Goatman to the Beltsville Agricultural Research Center, a sprawling USDA facility anchored by a big brick building appointed with white columns. In this version, a mad scientist is conducting experiments on a goat when something goes horribly wrong, turning him into a half man-half goat beast that is, naturally, hungry for blood.

He may not be as famous as his cryptid cousins Bigfoot or the Loch Ness Monster, but Goatman has a devoted following. He’s inspired a horror movie called “Deadly Detour” (they went with the Goatman-as-human version due to budgetary constraints, according to director Mike O’Mahony) and a Halloween attraction. He’s paid lip-service in the classic coming-of-age movie “American Graffiti.” When editing the illustrated Fantagraphics tome “BEASTS!”, Jacob Covey said he received more Goatman entries than he could include.

The stories began surfacing a “long, long, long” time ago, according to Dr. Barry Pearson, a folklorist at the University of Maryland. (Which happens to be in Prince Georges County and is home to a Goatman archive.) But the stories really kick into high gear around the ’50s and ’60s, with the Goatman having his “heydey” in the ’70s. Probably because of the dead dog.

In 1971, a puppy named Ginger met a grisly end in the city of Bowie. Reporter Ivan Goldberg covered the incident for the Washington Post, writing: “Ginger, a spritely mongrel who resembled a German Shepard, has been decapitated cleanly at the neck. The body is not found.” Goldman’s story suggested that perhaps the dog had been hit by a train, its head separated from its body and launched into the air. Locals quoted in the story fingered the marauding Goatman.

According to Pearson, when it comes to folklore and urban legends (“I hate that term because these stories almost always take place somewhere out in the woods,”) there’s always a “keeper” who passes the story on from one generation to the next. In this case, the keepers are bored teenagers with time to kill who go on what folklorists calls “a legend trip” to ferret out the Goatman.

“You have to figure out what teenagers have going for them,” says Pearson. “Today they have the mobility of the automobile and rampant hormones so they’re always off to Lovers Lane.”

Goatman is also purported to frequent Lovers Lanes, although he’s typically mauling a teenager’s car with a rock or axe instead of pursuing romance. He’s also often spotted near Fletchertown Road and Lottsford Road in Prince Georges County. Both stretches were once winding and dark but are now bustling thoroughfares whizzing past malls and tidy two-story houses, not really the stuff of nightmares — unless one is especially sensitive to the homogenization of the American landscape.

Some might wonder why a goat lies at the center of this horrifying legend. (This reporter for instance, who devolves into baby talk whenever a goat is near.) Why not, say, an animal that can actually kill you?

‘Don’t you think he would have retired by now? Is his great-grandson a goatman? Is he collecting Social Security?’

Examples of libidinous and violent goats abound. There was a cult in Roman times, for instance, that worshipped Dionysus and was led by a man dressed as goat. They were rumored to get very drunk, go into a frenzy and tear animals apart and eat them raw. Pearson is quick to point out this probably never happened. Witches were often depicted in the company of Satan, represented as a half man-half goat.

In medieval times goats were thought of as “being exceptionally lascivious.” Picky Dark Age-types even took issue with their eyes because of their “leering look, the lecherous look of the beast.”

Goatman may be all fun and games for Maryland teens, but there is one player in the story who is not amused. The Beltsville Agricultural Research Center.

“We just think it’s stupid,” says Kim Kaplan, spokesperson for the center. Maybe it’s sort of fun, just a little bit, to be part of a local legend?

“People really don’t even talk about him,” says Kaplan. “I mean its so silly, it’s not even something that’s joked about.”

Kaplan was also quick to poke holes in the Goatman story. “Don’t you think he would have retired by now?,” she asked. “Is his great-grandson a goatman? Is he collecting Social Security?”

Kaplan could not even recall when there were last goats at the center, although she surmised it had been “generations ago.” In fact the center is mostly devoted to records and genetics. They have, for instance, kept elaborate mathematical records pertaining to what bull sperm helps produce the best milk cows.

Even if the Goatman is not beloved by the center, he doesn’t seem to be going anywhere soon. As long as teenagers need an excuse to be alone in the woods together, Goatman lurks nearby, one in a long chain of sinister ruminants.

“Tell people to be careful,” Pearson says, offering a parting bit of sardonic advice, ” and don’t turn their back on the cute little goat.”

Thanks to Chris Rodenhurst for the use of his Goatman illustration.