Talking Goats with John Darnielle of The Mountain Goats

We get surprisingly deep about the pagan roots of goat mythology, what kind of lifestyle supports goat ownership and why - EXCLUSIVE - Darnielle might consider putting a goat on one of his band's t-shirts. 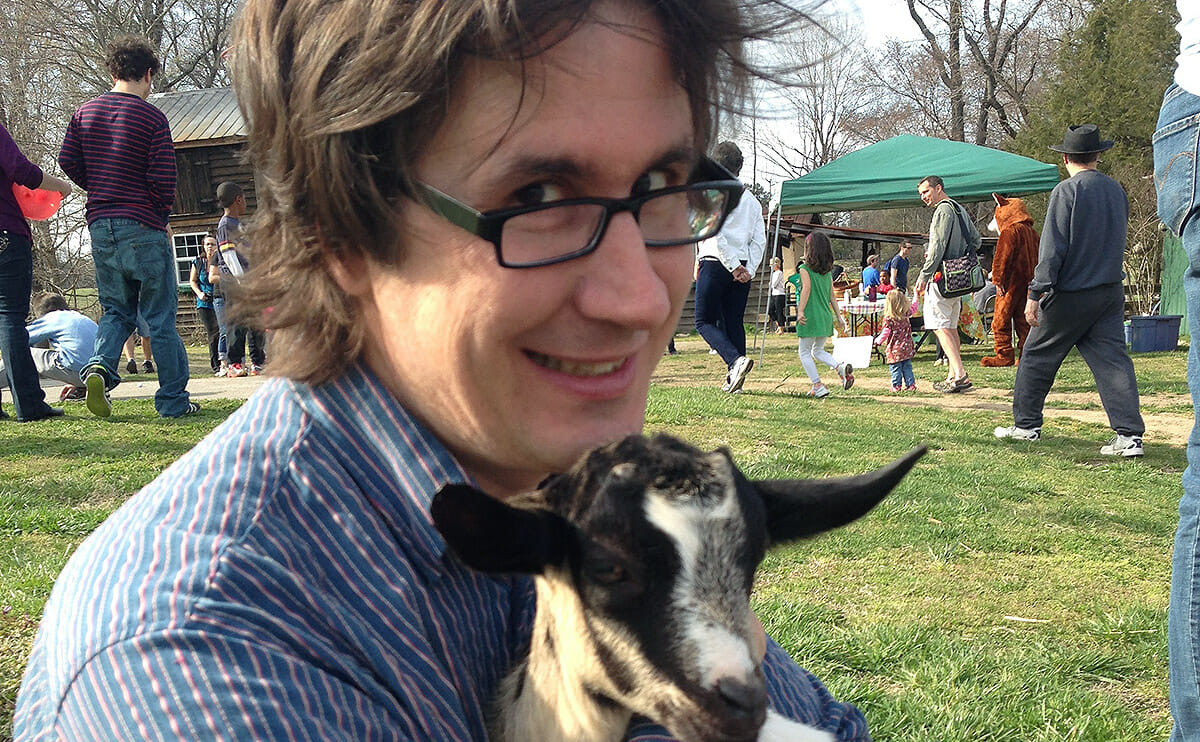 Modern Farmer: Thanks for taking the time to talk. I understand you get an interview request from a farming magazine, you’re probably wondering, ‘What the hell?’

John Darnielle: Yeah, quite often people are like, ‘Hey, where’s the picture of John with the goat’ or whatever. I haven’t really done that a lot, because you don’t want that to always be the thing. But at the same time, I named the band because I love goats. And I’m an animal person.

MF: So why’d you name your band The Mountain Goats?

JD: It’s from this Screamin’ Jay Hawkins song called “Big Yellow Coat,” which is one of those old blues numbers where the singer exaggerates everything about himself to a comic degree. He has this yellow coat that he’s describing: ‘Fifty million bulldogs, twenty mountain goats, all gathered ’round at sundown, to see my yellow coat.’ There’s something in the elocution of mountain goats, the way rhythmically the words came out, it sounded really cool.

‘If you look at North American mountain goats, they’re giant, splendid creatures. There’s something really spiritual about way they look. It’s really deep. You can look at them for a long time.’

Also, this is back when I’m like 23 and I’m living alone in a tiny apartment. And I start looking around in books and find out these are creatures that can climb rock walls almost vertically. I’ve been to Crete [Greece] and seen the Cretan ones, and they can climb these walls and they can cling to the walls like they’re spiders. But also, every year, many of them die from misjudging a gap that they think they can jump, and then down they plunge. And I thought, ‘Well this is hubris.’ I’m the the master of climbing and jumping and I can do whatever I want, but I really can’t do whatever I want.

Also, if you look at North American mountain goats, they’re giant, splendid creatures. There’s something really spiritual about the way they look. It’s really deep. You can look at them for a long time.

MF: Mountain goats have a reputation for violence. There was a guy gored to death in Olympic National Park last year.

JD: That was one animal. People get very excited about that. But when a wild animal behaves like a wild animal, I’m always shocked that anyone is surprised. You are a hominid in their realm, in the woods where it’s not really set up for hominids to be traipsing along in brightly colored clothes and cameras. I don’t think they’re really aggressive, so much as they’re always gonna be weirded out that creatures that have never been in their domain are suddenly there.

MF: You wrote a book about Black Sabbath’s ‘Master of Reality.‘ Why do you think goats get featured so often in both metal and Satanic imagery?

JD: Heavy metal takes that tradition from Satanist and I wanna say, maybe, Kabbalistic traditions. The goat in mythology, initially, is sacrificed. You have the old Biblical sacrifice. The community murders a goat in expiation for some wrong or another. So if you’re going up against that ideology, than you would champion the thing that got killed for no reason, which is why Satanism and anti-Christian people – which a lot of heavy metal is anti-Christian – would say, ‘Hey, we’re pro-goat.’ And I side with the metal people, [who say] animal sacrifice is nonsense.

Also there’s so much about goats – and this is stuff people who do mythology and Jungian stuff could talk about this better than me – but the nature of goat eyes is very different from other creature’s eyes. There’s something both identifiable and alien about it. They’re not directly in front of their head or on the side. They’re sorta this weird angle, so they look like they’re both predator and prey.

And they have horns, which, again, in traditional mythology and superstition horns can mean so many weird things. Horns are demonic. So there’s a lot. If you worked in myth traditions there’s a lot in there.

MF: Going through your discography, it doesn’t seem like you’ve ever written a song about goats?

JD: No, no. I mean – it’s just the band name. And it’s kinda interesting to me, that we’re talking about the animal. I don’t think people ask Deerhoof all the time about deer or about their hooves. They get off scot-free. From the minute I named this band, everyone was like, ‘Mountain Goats? Oh my God!’ And animal names in rock bands are so common. I mean, the Beatles.

But for whatever reason there is an expectation in the case of the Mountain Goats that there must be so many goat references. I did put a put a drawing of a goat on the first tape, which I didn’t really expect anyone to to ever hear, so I drew something cool for me. But we try not to depend on it, or be overcute. We want to be funny. We don’t have a logo. It would be too cutesy a way to go. ‘Here’s your goat, because we’re the Mountain Goats!’

MF: It’s a little too on the nose.

JD: At the same time, we’ve been at it for so long. I think about five years ago, I would have turned down an interview about goats. But you know, I read your email, and I thought, ‘Why the hell not?’ And in fact, in the past couple of years we’ve been wondering if it’s time to a do a t-shirt with a goat on it.

MF: So that’s an exclusive. The Mountain Goats are considering a t-shirt with a goat on it.

JD: It would be camp, but not too camp. It might be time. I mean, the other thing is when you tour, the people that do posters are hired by the clubs and they give you a few posters and then sell their own. It’s a way the clubs can make a little extra money. It’s one of the hidden cool things about touring, is that you show up, and go ‘Oh, my God, there’s this cool poster and there’s only 20 in existence, and I get to keep two of them.’

But those almost always have goats on them! Unless we send out advance notice, ‘Just because we’re called the Mountain Goats doesn’t mean we want a goat,’ the first thing people think, ‘I know, I’ll put a goat on it!’

‘People want to think about goats, because goats are badass.’

JD: Exactly. But the thing is, I actually think it’s because everyone loves goats as much as I do, and they just aren’t really in touch with it. And the second they get the opportunity to somehow imagine putting a goat on something, then they go for it, because people want to think about goats, because goats are badass.

MF: After Goat Week, I think we entirely agree.

MF: You’re preaching to the choir here. Have you ever considered owning a goat?

JD: I would love to. People owning goats in the city – for me, I would want to be on a farm, and I don’t know if at this point in my life if we ever will live on a farm. If we do, then I would want goats. Not many, because if you have a whole bunch of goats then that’s real work. It’s what you should be doing with your time. And right now, I’m gone for long stretches of time when I tour. It’s not a goat-herding lifestyle. If you’re herding goats, you stay with your goats. I wouldn’t want to say, ‘Hey, come take care of these goats,’ and try figure out what the minimum care you can give them. That’s not my style.

Though, back when pygmy goats were a trend, I was hanging out with pygmy goats and I was like, ‘Oh, give me one.’

But I’m a big animal person, and I believe if you are going have an animal then you are committed to taking the best care you can. I wouldn’t get one unless I could be there for them all the time.

MF: Final question: would the best ever death metal band out of Denton have featured goats on their merch, had they ever gone on tour or made it big?

JD: So – the goat head, you see in Satanic imagery, is called a Baphomet, and it is super classic Satanic image that sits on the circular grid, and there’s probably a lot say about in relation to numerological stuff. It’s so common on the cover every black metal record. And as drum head design, it’s almost as common as the world ‘Pearl.’ It’s a thing.

So, it’s hard to say, because this band, we just don’t know enough about them. Are they a band that’s trying to buck against a trend, or they just adopting a style of music that they like?

Though, I mean, I would think of them as logo guys. They would be spray can dudes who would want their name on their stuff more than a picture. But I don’t know for sure.

MF: It’s hard to say — it’s something to leave up to the listener. Cool, well, thanks for taking the time to talk.

JD: Sure. What’s the name of the magazine again?

JD: I thought it was Modern Goat! And I was so excited. ‘Modern Goat! This is an awesome magazine title.’

MF: Modern Goat is probably our next magazine. After this one works out, we start going really niche.

JD: Oh wow, I’m looking on the website. You have a lot about goats on here!

MF: Yeah, so this whole thing, we just did Goat Week, like a whole week of nothing but goats. It’s like Shark Week, but with goats. And you are now the grand finale.