Goats can be bad guys, too. 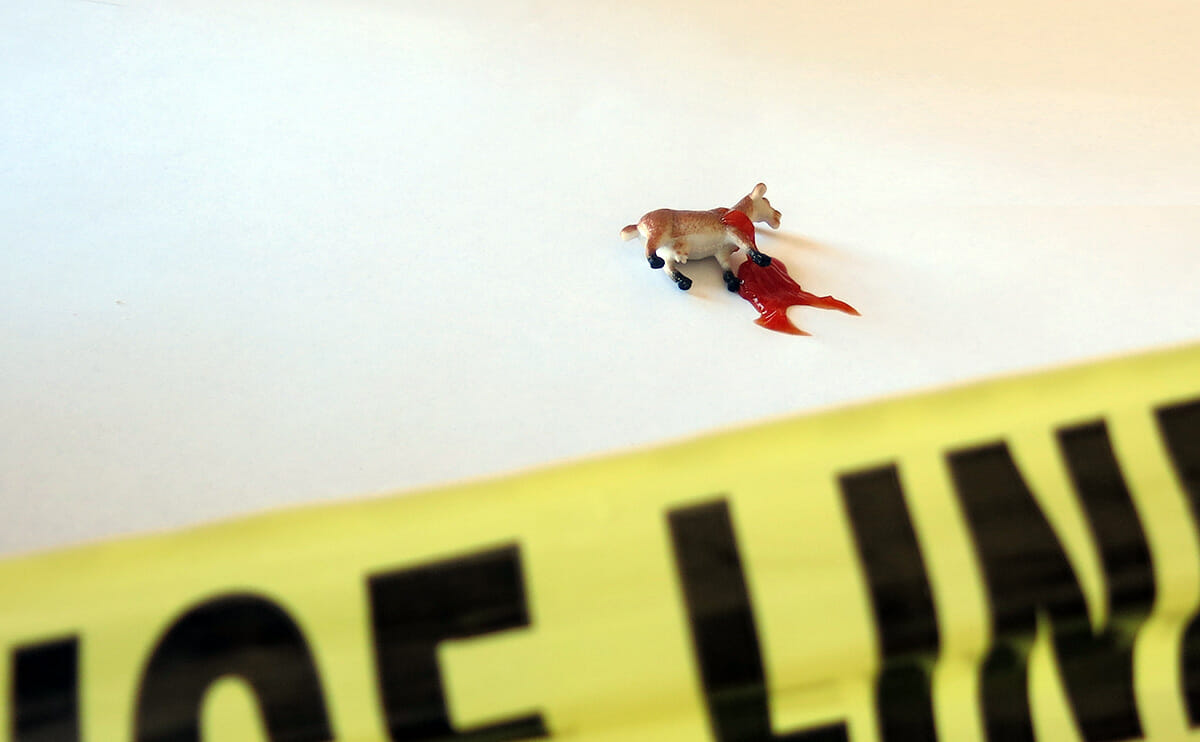 In most instances the interaction between law enforcement and goats seems to be limited to Keystone Kop-style antics, with the wily animals outmaneuvering the lumbering lawmen. The Internet is rife with videos, including these from Australia, Japan and the United States.

It seems goats have a nasty reputation for randomly taking people out at the knees, and thanks to YouTube and similar sites, Modern Farmer readers can watch goats go wild, as in this video from Brazil, where a goat randomly attacked passersby and even managed to tackle a motorcycle.

The Childhood Goat Trauma Foundation (the organization seems rather tongue-in-cheek) has documentary evidence of this behavior under their “Goat Trauma in Action” page. Although some of the images are clearly altered, the video of the kid (goat) taking down a kid (human) appears real enough. It’s worth perusing the entire site.

In November 2012, a seriously frightening looking goat named Voldemort stalked a 14-year-old paperboy in Utah. The goat knocked Jaxon Gessel off his bike and then tracked the young man for more than an hour until the police – following up on a report of a missing child – came to the rescue.

Gessel told local news agencies that he got a lot of ribbing from friends for the incident. When people ask him why he’s scared of goats he answers, “I’m like, that was a freaky goat. I think it’s like possessed or something.”

On a more serious note, in October 2010, a hiker died when he was gored in the thigh by a 370-pound mountain goat at Olympic National Park in Clallam, Washington. His widow’s lawsuit against the federal government was tossed out of court in August. The suit alleged park officials were aware of the aggressive animal but did nothing about it. A park ranger later shot and killed the mountain goat. In this instance, it was a wild animal involved in the crime and not a domesticated goat – violence not being normal domesticated goat behavior.

In Gresham, Oregon, in August, two police officers spotted a goat on the roof of a home, but when they approached to investigate, the were warned away by a neighbor who told them to be careful because the goat “only respects one man.” That man was the animal’s owner, who was able to get the goat off the roof without further incident. The goat was not charged with intimidation.

So what happens when the police catch up to the malefactors? In Germany in 2009, the cops cuffed a flock of errant goats that had wreaked havoc on rush-hour traffic in Bielefeld. The officers defended their actions, saying “We’re not farmers and we don’t know about animals. But we do know about handcuffing troublemakers so that’s what we did.”

In India, Israel and Nigeria misbehaving goats were taken into custody for damaging a new police cruiser, trespassing and um, carjacking respectively.

The officers defended handcuffing the goats, saying ‘We’re not farmers and we don’t know about animals. But we do know about handcuffing troublemakers so that’s what we did.’

In June, police in the southern Indian city of Chennai detained three goats of an alleged gang of 12 that had climbed onto a brand new police cruiser “damaging the wipers and glass, and scratching the paint of the bonnet and body.” Their owner was charged and the goats were handed off to the Society for the Protection of Animals.

Police in Israel arrested Geula the goat, along with four human teen companions, in 2011 for trespassing after being caught allegedly trying to set up an illegal outpost in the West Bank. She was the last to be released from custody because there was a dispute about whether she would have to post bail or have her owners sign a statement agreeing to keep her away from the outpost. She was eventually released without conditions.

But it’s Nigeria, where a belief in witchcraft and wizardry is alive and well, which leads the pack in strange confrontations between goats and the police. The country seems to be the epicenter for goat perpetrated misdeeds, including carjacking and political hanky-panky.

The most widely reported incident was in March 2009 when police in Kwara state, a region in western Nigeria, held a goat on suspicion of armed robbery after a vigilante mob brought the animal to police insisting that it was not an actual goat but a man who attempted to carjack someone and then magically transformed himself in order to avoid capture.

Those wily Nigerian goats were back in trouble two years later when they allegedly sabotaged Nigerian opposition party leaders who had to make an emergency landing when their runway was overrun by goats. Their plane was damaged and they “narrowly escaped death” they alleged. The members of the Action Congress of Nigeria believed the goats were working for their political rivals.

This anti-goat zeal isn’t just a modern phenomenon. Historically, goats have gotten a bad rap — at least on the Judeo-Christian end of the religious spectrum. An ancient Jewish rite on Yom Kippur involved sacrificing a goat to God and releasing another into the desert, the animal acting as a vessel for the sins of the people. The term scapegoat is an English translation of the Hebrew word for that desert-bound, sin-laden goat. In Medieval Europe, Christians began to associate goats with witchcraft and the Devil, a concept that continues to inspire metalheads to wear t-shirts emblazoned with pentagrams that feature goat imagery.

Speaking of guilt by association, Whitey Bulger was photographed with a baby goat just before going on the lam in 1995. The goat wasn’t charged as an accessory in any of the crimes the infamous Boston gangster was recently convicted of, but they say you can tell a person, or goat, by the company they keep. The same goes for Betty the goat, the pet of Congolese rebel leader Laurent Nkunda.

Nkunda, who was captured in 2009, was allegedly responsible for using child soldiers in a conflict that helped instigate “a humanitarian crisis of catastrophic dimensions.” He’s accused of various war crimes, but Betty remains above the fray.

For those crime-committing goats that make it to court, sometimes justice prevails. In Australia this past January, Gary the Goat and his owner had vandalism charges dismissed in a flower eating incident outside the Museum of Contemporary Art in Sydney. Gary was not required to give evidence and quietly waited for his owner outside court surrounded by photographers and wearing a rainbow colored cowboy hat.