We said it's cool to sample pretty much anything at a farmers market. We talked to a farmer who says different. 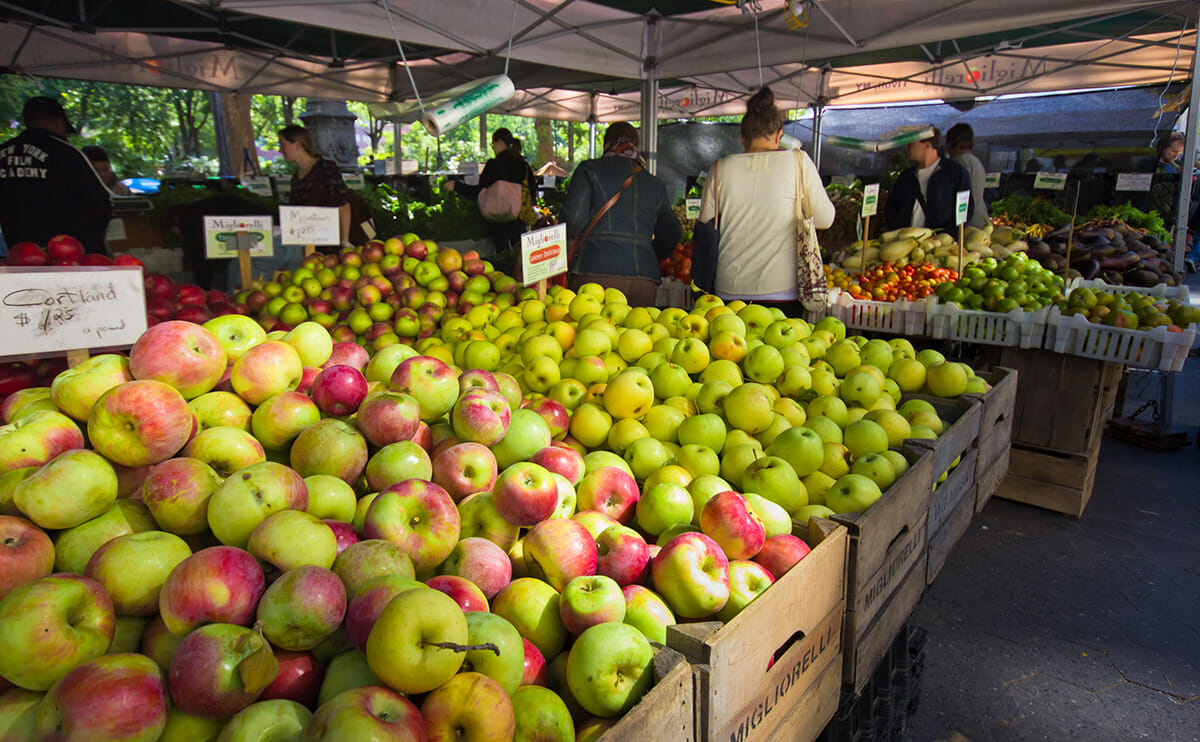 Specifically, about these two parts:

Do: Take as many free samples as you damn want. “Sampling is a big part of our business,” says Legg. “It gives us an opportunity to make better choices about what [customers] want.”

Don’t: Bother asking before taking a sample of something that’s not labeled as a sample. “Most people know how this works.” (No, I did not.) “You don’t really have to ask, but you can ask anyway.” So apparently it’s fine to just grab a strawberry or string bean and chomp away in the name of sampling.

Mary Carpenter is 38, the head honcho of Violet Hills Farms and a fellow vendor the Union Square Greenmarket. She also left us some pretty scathing comments on Facebook and on the website, and when someone says mean things about us on the Internet, our first instinct is to pick up the phone.

We managed to catch a few minutes with (the entirely delightful) Carpenter early this morning, in between her many duties around the 200-acre farm, where she raises pastured livestock. “We sell pork, lamb, rabbit, chicken, turkeys, geese, duck, beef,” says Carpenter. “We have, like, every animal.” In her previous life, she was a makeup artist — then she fell in love with a farmer at a farmers market, and began a new life farming. Which means, one, she is the Platonic ideal of a Modern Farmer reader, and, two, apparently she is okay with Legg’s advice that it’s totally cool to flirt at farmers markets.

Her main objection to the article? The idea that you don’t need to ask before sampling anything on the table. Because, depending on regulations, if you grab something off a table without asking, you could be putting a dent in someone’s bottom line.

“Produce farmers, for instance, have to trickle wash all of their greens that come in,” says Carpenter. “When you start pulling out bits and piece with your hands, you’ve contaminated an entire container, which at the market can be a rule breaker. You can contaminate an entire volume of something that’s potentially worth a couple hundred dollars.”

Sometimes sampling can go too far. ‘We’ve actually had people stick their own hands in our own lunch.’

Beyond that, there’s the danger of just chomping on random things at the farmers market. Carpenter sells foraged mushrooms, which shouldn’t be eaten raw (or unwashed). “Just walking around the market, popping things in your mouth is not the smartest thing.”

Plus, if you sample out of a weighted pint or quart container, you’re essentially taking food out of the mouth of whomever eventually ends up buying the produce.

Some customers have really overstepped their bounds. Carpenter and her partner don’t take a break while selling at the farmers market, meaning the farm vendors eat their meals at their booth. “We’ve actually had people stick their own hands in our own lunch,” she says.

Her other issue is that people can overdo it on the sampling. “We grill up meat for sampling,” says Carpenter. “We had somebody once, we were preparing samples for rabbit, and they grabbed an entire loin of a rabbit. Normally that would be many small bite-sized pieces. And that’s expensive for us. When something’s 15 dollars a pound, and someone grabs a pound-and-a-half of loin, that comes out of our pocket.”

None of this is to say Carpenter doesn’t want customers at farmers market to sample. Just know that each vendor is going to have their own rules. The regulations around cheese are way more onerous than, say, cherry tomatoes. “I think people can read something [like your article],” says Carpenter, “and take it as the gospel truth.” But, she says, what works for Hawthorne Valley Farm — a relatively huge operation in the world of the Union Square Greenmarket — may not work for the vendor one row down.

Still not sure what the right move is while browsing at the farmers market? “It’s like what we learned in high school,” says Carpenter. “There are no stupid questions. Just ask away.”

Related
Plants
Why We Need to Adopt More Orphan CropsShea Swenson
Animals, Food & Drink
Can Finding New Culinary Markets for Green Crabs Help Curb the Invasive...Tim Briggs
Food & Drink, Plants
How to Transform Green Walnuts Into a Nutty LiqueurDanny Childs
MTMF, Water
The Oyster Shuckers Turned Oyster FarmersJennifer Kornegay
wpDiscuz
We use cookies on our website to give you the most relevant experience by remembering your preferences and repeat visits. By clicking “Accept”, you consent to the use of ALL the cookies.
Cookie settings ACCEPT
Privacy & Cookies Policy