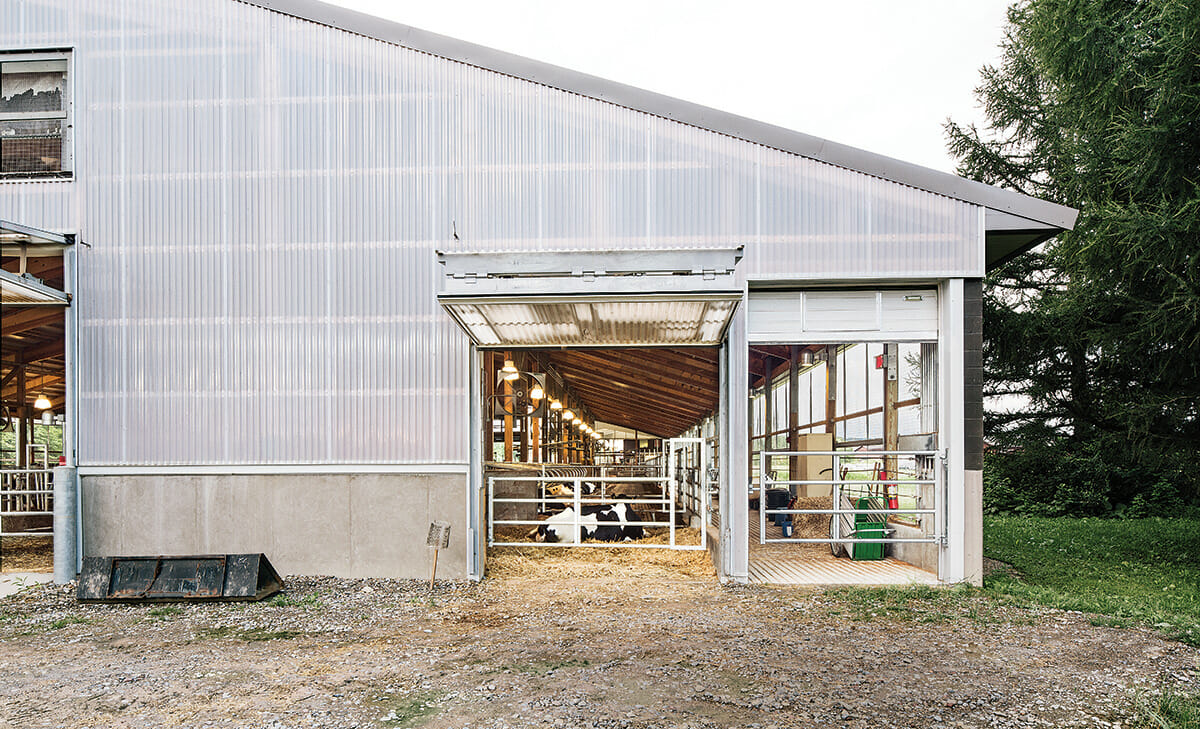 Nothing puts a sparkle in a young woman’s eyes like plowing up loads of liquid manure. At least, that would seem to be the case as you watch Carolyn Kokko, a Cornell University graduate student, cheerfully driving a Bobcat utility tractor and using its scoop attachment to muck out lanes between rows of cow stalls in the school’s new Teaching Dairy Barn. More important, the building’s residents seem quite content, too. When the barn was devised, “cow comfort was our No. 1 priority,” says Chuck Guard, a professor of veterinary medicine who oversees the facility, which opened in the autumn of 2012. “A happy cow is a productive cow.”

The terms ‘Ivy League’ and ‘farm’ sound like odd companions, but Cornell’s relationship with farms, cows and soil runs deep.

A concrete manifestation of Cornell’s commitment to food science and animal husbandry, the Teaching Dairy Barn has a symbolic value too, says Scott Erdy, a principal of Erdy McHenry Architecture, the Philadelphia-based firm that designed the structure. “The building is a commercial dairy and a working classroom, but it also serves as a gateway to the Cornell campus at its rural edge,” he says. “The barn is the first thing you see, so it has an aesthetic function.”

It performs that task admirably. The building represents an elegant, modern take on traditional barn design. The twin planes of the sweeping, ribbed-metal roof have a dramatic offset – a space filled by clerestory windows (above eye level) facing the southern exposure. The barn is “oriented so that the open walls catch the prevailing winds and maximize ventilation,” Erdy says. “This is the least smelly cow barn you will ever visit.”

The building sits atop a low ridge, adjacent to a stand of old-growth forest. At the point where the cow stalls meet the “milking parlor,” the structure angles slightly to the northwest to conform to the topography, giving the barn further modernist panache. Inside, laminated plywood trusses that support the roof have been engineered to follow the lines of the ceiling. The design prevents birds – which are vectors for disease and can also consume huge amounts of feed – from finding places to perch, as they would among the rafters in a traditional “webbed” truss barn.

The terms “Ivy League” and “farm” sound like odd companions, but Cornell’s relationship with farms, cows and soil runs deep. The school – located in the Finger Lakes region of upstate New York, outside the city of Ithaca – was founded in 1865 as a state-sponsored land-grant college. Government support carried with it a mandate to make agricultural studies a key part of the curriculum. The university was built on farmland donated by Ezra Cornell (who also endowed the school), and milk produced on campus has long nourished Phi Beta Kappa brains.

Unsullied by pigeons and starlings, the 185 Holsteins currently enrolled in the barn enjoy several superior amenities. The cows can eat when and however much they like. (Their feed consists of silage – moist, fermented fodder made from corn – mixed with alfalfa, soy, canola oil and grains.) Instead of straw, they bed down on sand – a more comfortable cow mattress that, being inorganic, does not foster the growth of bacteria. The areas between the stalls are roomier than in most barns, and the cows are never tied in place.

The most obvious perks, to non-bovine sensibilities, are the electronic back-scratching devices. These consist of large, rounded nylon brushheads – which look like one end of a personal shoe-buffer – mounted on an armature. When a cow roams over to the machines, the brushes automatically engage and rub the animal’s back and flanks. Far from being dumb, “the cows figured the back-scratchers out for themselves,” says Guard. “We didn’t teach them a thing.”

So are the cows happy? The proof could be in the milk pail. According to Guard, each cow produces an average of 95 pounds of milk per day. (By custom, pounds are the wholesale commercial measurement used for milk delivery.) “That puts us in the top 95th percentile of milk production, and maybe in the 99th percentile,” he says. The cows give so much milk they are milked three times daily, with half the milk staying on campus when school is in session and the rest going to a regional dairy co-op. Twice daily is the norm on most farms.

Cows experience the magic of automatic brushes, which start as soon as the cows touch them, and provide cleanliness and enrichment

And if contentment can indeed be calibrated by the quart, then it is done so digitally. Each cow has a data chip embedded in her ID ear tag. When the animal is attached to a milking machine, a computer registers the cow’s identity and notes whether or not she is producing her standard amount of milk.

Of course, the firsthand evidence is the most convincing. Anne Borkowski – like Kokko, a graduate student of veterinary medicine – moves easily among the cows. Impressive, as they are big beasts intimidatingly unaware of their bigness. “They’re curious, but cautious,” she says of the cows as she shoos them aside. “That’s good. They’re easy to move because they’re cautious.”

Students, like farmers, do not habitually make pets of cows – doing so would inevitably lead to heartbreak. But Borkowski can’t help herself with one animal. “Here’s my favorite. She’s kind of old, and follows me around,” she says, arriving at the stall where cow #1066 lies. “Hi, Mommy!” She nestles against the cow, and strokes her side. “My friends laugh at me because I spend so much time here at the barn, but I’m crazy about it,” Borkowski says. “If I were a cow, I’d love to live here.”