The patchwork of circles and squares that make up the farmlands of the American West are a familiar scene to frequent flyers. Those circles — caused by center-pivot irrigation — are a common occurrence in agriculture. Artist Gerco de Ruijter makes the common uncommon by using images of these circles as the centerpiece of his […] 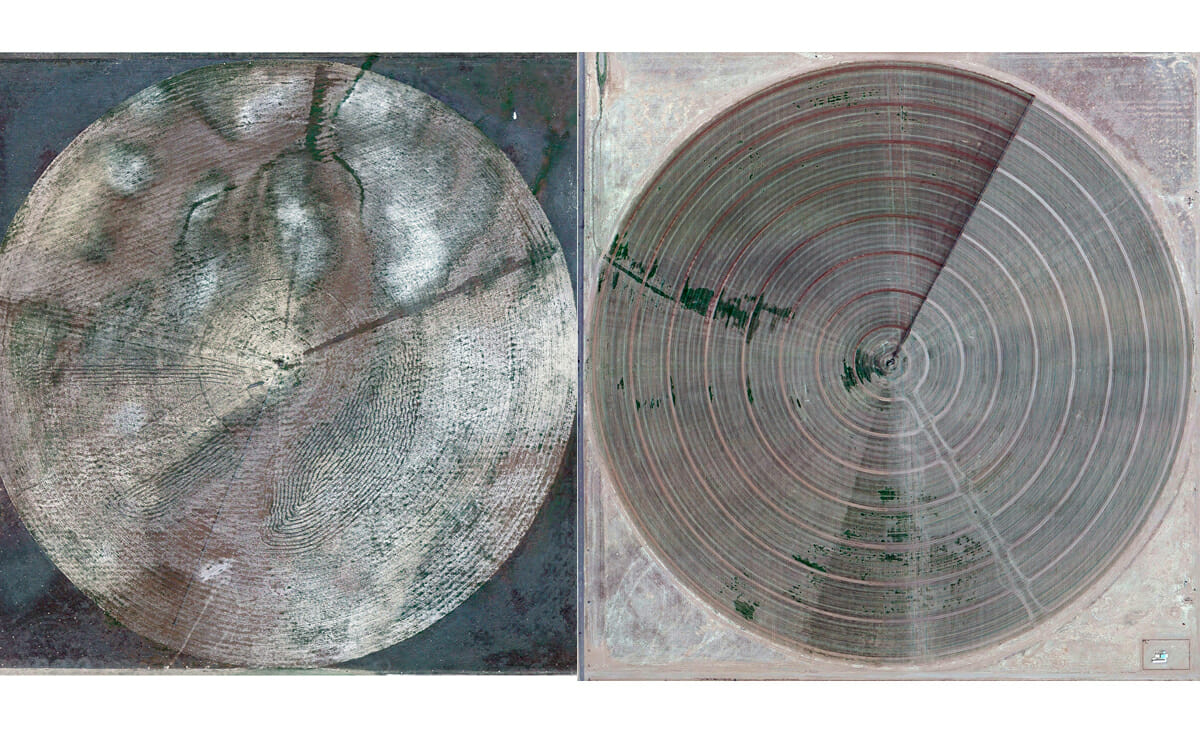 The patchwork of circles and squares that make up the farmlands of the American West are a familiar scene to frequent flyers. Those circles — caused by center-pivot irrigation — are a common occurrence in agriculture. Artist Gerco de Ruijter makes the common uncommon by using images of these circles as the centerpiece of his 2012 short film, making its museum debut at the Hirshhorn Museum in Washington DC.

The film is composed of a series of over 1000 images of clock-like irrigation circles taken from Google Earth and cropped to squares. As they flip rapidly from one image the other, a soundtrack infused with a mechanical vibe playing constantly over them, they are reminiscent of the grainy film leader counting down the seconds to the beginning of a classic Hollywood movie.

Using Google Earth images is a part of a new process for Ruijter, who is better known for his bird’s eye view photography using customized kites outfitted with a camera and timer. Ruijter told Modern Farmer he found his kite method didn’t give him the full circle. Google Earth images, on the other hand, gave a full view and the he found the images have greatly improved in the last few years.

“I could save these images on my computer and travel throughout the South and Midwest sitting behind my desktop,” he told Modern Farmer in an email. “Traveling from one season to another, from seed to harvest and ploughing.”

Ruijter has insisted in the past that that his work does “not dish up a story or a deeper meaning.”

“There is no narrative in the film. It is a film made from a personal fascination on the subject: circles and squares, geometrical abstractions in combination with growth and decay throughout farming seasons. The seemingly endless variations in color and texture,” he wrote.

But Gordon thinks perhaps a bit more lurks beneath the surface.

“Well he says this but you can’t help but start to read things into it,” says Gordon. “Is he saying cultivation as we know it is running out of time? Or is he saying there are other factors that influence the way agriculture is done?”

When it comes to “ever interesting work of art, the people who are looking at it bring some sort of meaning to it,” she says.

CROPS is on view at the Hirshhorn Museum. Gerco de Ruijter will be giving a gallery talk on October Tuesday 8th at 7pm and Friday October 11th at 12:30