Children of the Corn

Every summer, thousands of Midwestern kids climb aboard schoolbusses, headed out to fields to detassle corn. Modern Farmer goes along for the ride. 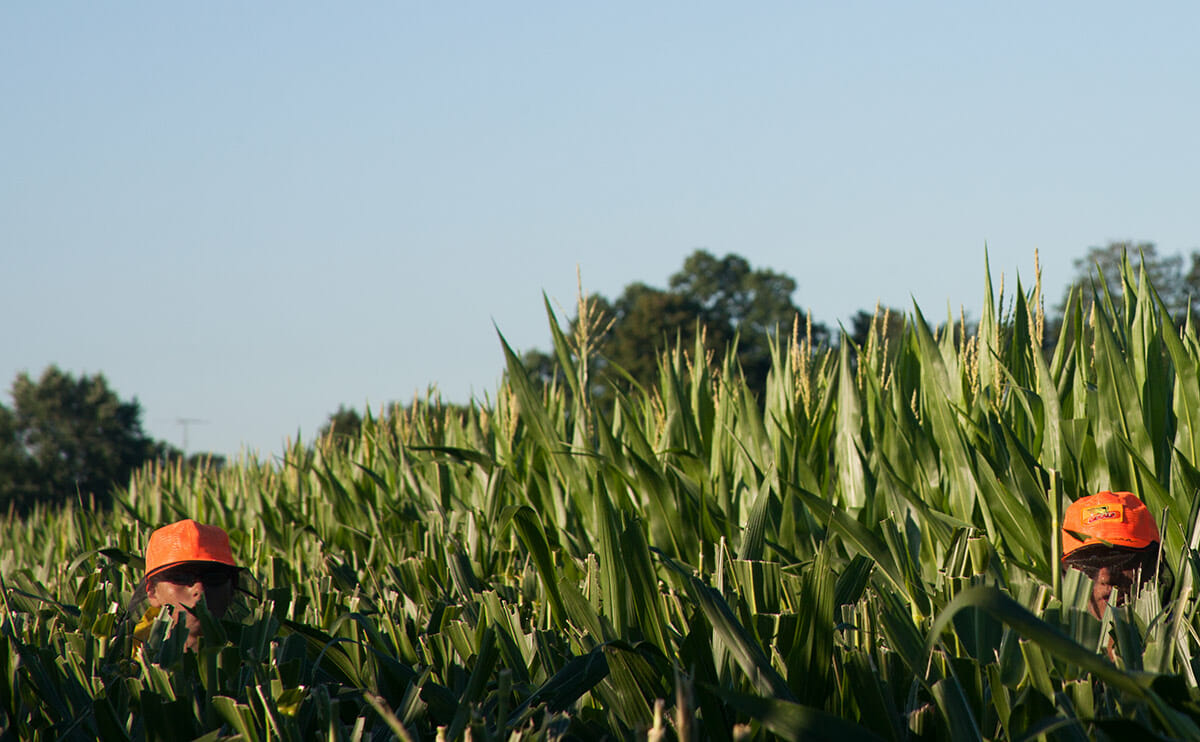 It’s just past 7 a.m. on a dewy July morning when the doors of a purple school bus open to deposit dozens of blurry-eyed teenagers, some as young as 13, next to a cornfield in St. Joseph County, Michigan.

They are slumped with the weight of plastic lunch coolers and gallon water jugs, faces obscured by the black netting pulled down from bills of orange safety caps. Divided into groups of five, they hang their name tags on the baby stalks of corn at the head of each row and disappear into the field to start the day’s work, visible only as bobbing flecks of orange among the corn tops.

In a season revered for its total lack of responsibility (and alarm clocks), these kids, at least for a few weeks, have given up the dream of lazy summer days, replaced by the desire for new electronics, school clothes, a first car, or college savings. For a starting rate of $7.25 an hour, they’ll spend the day slogging through muddy fields of tall, leafy corn, pulling off foot-long green tassels, the ropey seed-filled growths that are generally the highest point of a corn plant. The goal is to take these tassels off of plants in certain rows to produce a yield of hybrid seed corn in one of the nation’s most seed corn-rich regions.

The job is called detasseling; it’s a Midwest-specific chore where the male pollinating organs are removed from specific stalks and left on others at a ratio of 4:1 to allow for cross-pollination, with the intended result being a more vigorous, productive seed.

The end result, Erickson says, is what people call ‘dent corn’, or field corn; it’s the corn that livestock eat, or that’s made into ethanol, or that lands on shelves as high-fructose corn syrup.

Modern, GPS-driven machines usually perform the first detasseling pass on a field (a “cutter” chops the tops of the corn, the “puller” uses two rollers to remove the tassel), but because stalks are variable heights, machines can only clear between 60 to 80 percent of the tassels; depending on a company’s standard, a field must be between 99.5 percent to 99.8 percent clean or the seed will be contaminated.

Despite decades-long talks that innovations like male-sterile corn could one day eliminate the need for detasseling, fears of blight-vulnerability and overall complexities in biotechnologies have, for the moment, kept seed corn companies beholden to the system of manual detasseling. But there’s still more impetus now than ever to output hybrid varieties. Figures from the USDA show a rise of nearly 300% in hybrid seed corn prices since 2002.

And thanks to exceptions in labor laws for agricultural workers, spry teen hands in Michigan can get their share of the pie as soon as they’re 13. Most teenagers in St. Joseph County and surrounding areas know exactly what “working in the fields” means – and the conditions can be grueling.

On this morning, the air carries a chill and dew is thick on the corn leaves; after the first pass through the corn, groups return dripping wet and shivering, some wringing out the bottoms of their shirts, others complaining of numb fingers. During an intense heat wave the week earlier, it was the opposite, sweat beading on foreheads by 7 a.m. Even on moderate weather days, there is the constant threat of corn rash, sunburn and strikes from rogue poison ivy plants.

But besides a little grumbling, the tenor is the opposite of what its Steinbeckian conditions suggest. The field is abuzz with voices, laughter, banter; the packed bus is rife with teasing, flirting, trouble-making. It’s a microcosm of the teen world, and most kids are eager to be here.

“Yeah, I like it,” says Eric Welch, 13, a first-year detasseler. “It sucks in the morning because it’s super cold and wet. But it’s cool when you’re with kids that like to have fun.”

Welch is in a group of five boys, and they walk through their block of corn plucking tassels and talking about the normal excitements of teenage boys (someone’s brother spotted a yellow and black Lamborghini at the movie theater, another is turning a Dodge Warlock into a street rod with his dad), and about what they’ll buy when their checks come in (an iPod, a mountain bike, a guitar). For a moment, they try to sing the country song “Get Your Shine On”, but no one remembers the words.

“I’m buying a truck,” announces Justin Allison, 15, who is in his third year of detasseling. He cuts the thought short to ask a girl in an adjacent block what she’s doing later.

At the end of the row, kids congregate around a water dispenser on a truck bed in front of the mobile Porta Potty. (A blonde girl is heard exclaiming to her friends, “I’m going to marry Luke Bryan, you guys! Have you seen how hot Luke Bryan is?”) They’re hustled back into the corn by Jake Fassett, 19, who describes his job as “field supervisor and poop hauler”. He’s responsible for keeping the younger kids on task – and getting the Porta Potty between fields.

Indeed, detasseling is equal parts job and social club; choosing the right company to work for in the summer involves multiple variables like friends, family connections and a company’s reputation.

These kids have been recruited by Brandon and Tiffany Wenzel, the husband-and-wife team who run Nemire’s Detasseling. Tiffany inherited the business (and its fleet of painted busses) from her father, Rick Nemire, whose farm is still the hub for the masses of minivans that drop off groggy teens each morning.

“A lot of our workers are second generation Nemire Detasselers, so their parents worked for my dad 30 years ago, and now they work for me,” Tiffany says.

When Detasseling Went Away

The Wenzels go into local schools with picture boards, slideshows, and popsicles to entice new kids into signing up every year; their website showcases a homemade music video (set to a Feist tune) where workers dance the can-can and a job in the corn looks like a trip to summer camp. Company t-shirts are likewise emblazoned with the promise of a good time: “Nemire’s Detasseling, It’s Where the Action’s At!”

They’re up against two other local outfits vying for teens’ attention, but this year they run an advantage: Both competitors have contracts with Pioneer Hi-Bred International, which changed its minimum working age to 14 last year (as a pre-emptive measure to comply with proposed legislation in Michigan that was later overturned), so they can’t hire 13 year olds. In all, the Wenzels signed up 200 students from nearby schools in 2013 (roughly a 50 percent increase from 2012), although only about 130 show up on any given day; as the season rolls into August and band camp, drivers ed, and football practices begin, the roster drops to about 80.

Nemire’s Detasseling operates outside the small village of Mendon, about 20 miles down the road from Constantine, Michigan. The latter holds the designation of official “Seed Corn Capital of the World” and produces roughly 10 percent of the world’s seed corn; surrounding areas account for another 10 percent. The sandy soil in St. Joseph County makes it particularly hospitable to the crop, and fields where single pollinating rows stand up like mohawks amongst their blunt-cut peers are a common sight.

The county houses seed corn operations for Monsanto Production Company and Pioneer Hi-Bred International. According to figures from a 2003 Michigan Senate Resolution, Monsanto employs roughly 1,500 seasonal employees during detasseling weeks, and Pioneer, 3,000. (It was unclear whether these are state or national figures; neither company returned calls for comment.)

Because of new contracts working Monsanto fields, Nemire’s safety standards are particularly stringent. In these early mornings, the Wenzels skitter between busses and flip through clipboards, occasionally sounding group-wide warnings. “Mask, gloves, and eyewear – otherwise we’re calling your parents to come pick you back up!”

It’s a far cry from the days when business came from smaller farmers. Brandon Wenzel recalls that when he worked the fields, it wasn’t uncommon to see kids riding on the top of the bus, walking the rows without shoes, and lobbing huge chunks of dirt at each other through the corn.

Now, Jake Fassett says, things like “horseplay and attitude” can get kids sidelined on the bus for a few hours without pay. As soon as objects start flying over the tops of rows, he steps in.

“The tassels, those seem to be the weapon of choice,” he says.

Nemire’s Detasseling incentivises those with a more austere work ethic. The company pays first year laborers the state minimum wage of $7.25 an hour (and for each year they return, there is a $0.25 increase), but at the end of the season, $0.25 retroactive bonuses can be added for every hour worked in the categories of attendance, hard work, safety, and quality.

With no real expenses at these ages, many kids are afforded significant purchasing power with their detasseling checks. Nemire’s Detasselers are expected to average between $800 and $1,000 take-home pay this season.

Jessica Fess, 20, is in her seventh year of detasseling and has worked her way up to be a field supervisor. Like Fassett, she monitors the ends of the rows when kids emerge from the corn to make sure they’re hustling back after water breaks.

She says that when she was 13 or 14, she used some of her detasseling money for school clothes and going out with friends during the summer, but she put some away, too.

“I have most of it still saved that I’m using for college now.” She takes classes at Glenn Oaks, the community college nearby.

Fess says her family has been detasseling so long they’re experts at the routine: Waterproof suits and galoshes in the morning, shorts and t-shirts in the afternoon, baby powder to treat corn rash overnight. It’s the first year she’s gone through the rituals without a longtime friend of hers, who landed a job in a Monsanto warehouse. But Hess says she prefers being out in the fields every day.

“I love [detasseling]. It’s the perfect job for someone who likes being outside a lot. But,” she adds, “you do have to deal with tan lines.”