When people think of America's former president, farming isn't usually the first thing that comes to mind. But the philanthropist sees global agriculture as containing some of the biggest issues of our time, namely, food security and feeding the planet. We talk to Clinton about all that, and his Great-Uncle Buddy. 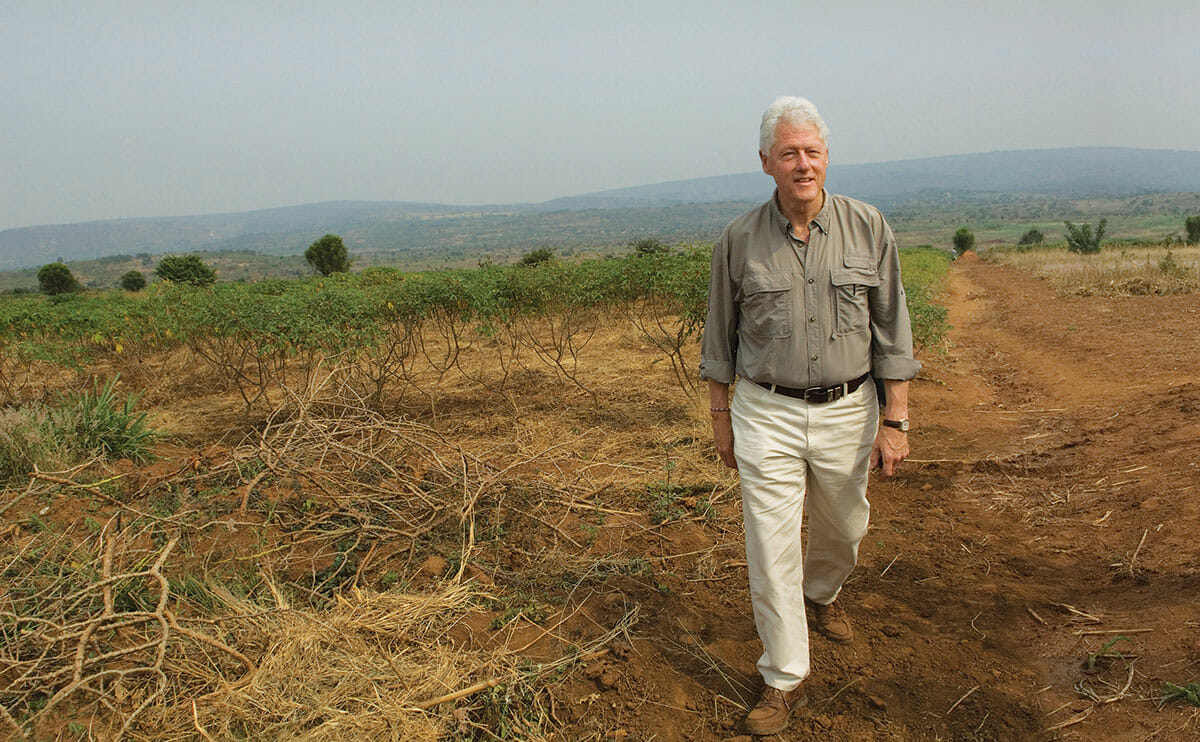 MF: Can you describe a childhood memory regarding food and agriculture?

Bill Clinton: I spent quite a bit of time on farms as a child, including a period of about a year when my family lived on a 400-acre farm that had cattle, sheep, and goats. But my favorite memories of food and agriculture involve the time I spent with my great-uncle Buddy and his wife, Ollie. Most people in Arkansas had moved into towns by the time I was born, but the hard lessons of the Depression led a lot of people to keep a small plot of land out in the country and raise as much of their own food as they could. I used to love going with my great-uncle to his plot to help him farm. So as a young boy, I picked beans, corn, and tomatoes, poured tubs of water into sandy soil to grow large watermelons, fed animals, and badly lost a head-butting contest to a ram.

On the weekends, we would have huge meals in Buddy and Ollie’s kitchen, with ham, cornbread, peas, collard greens, sweet potatoes, pies, iced tea, and homemade ice cream made in a bucket with a crank I loved to turn.

Like most of the people we knew, we didn’t have a lot of money, so these meals were our main form of entertainment. Everyone would sit around for hours telling stories, and my great-uncle, who was one of the smartest and funniest people I’ve ever met, used to make me laugh until I’d cry. Before I could tell a story, I had to listen to one and recount what I’d heard.

MF: What have your roles in government, and as the founder of a global foundation, taught you about the role of farming and agriculture?

BC: Time after time, I’ve found that helping a country meet its own food needs accelerates economic growth in other sectors, creates jobs, reduces reliance on imports, and preserves social balances between urban and rural areas. Every nation should strive to be as self-sufficient in agriculture as possible, and to do it in a way that preserves the culture of the people and their rights to farm the land.

The most important lesson I’ve learned is that intelligence, hard work, and ability are evenly distributed around the globe, but investment and opportunities are not. In the places I work with my foundation, most smallholder farmers have an acre or less of land. It is essential to their survival. But despite their skills, knowledge of the land, and will to succeed, many of them cannot afford the basic inputs to increase their yields or diversify their crops – and because they live in remote areas without the means to get their crops to market, they must pay up to half of their yearly income to get someone else to do it.

My experience is that if you give people good seeds and fertilizer, get rid of the pests, and provide storage and marketing capacity, then you can dramatically increase both production and income. At our Anchor Farm Project in Malawi, for example, we operate a large farm that partners with thousands of nearby smallholders so they can take advantage of bulk prices for seed and fertilizer, and then we transport their crops to market. The farmers we’ve worked with have quintupled their yearly incomes on average, which has dramatically improved their quality of life and, in some cases, enabled them to send their children to school for the first time. The Anchor Farm Project also works to empower female farmers — women serve in various leadership positions in our farm clubs, including lead farmer, and, currently, more than 800 of our more than 2,500 farmers are women. We’re working to get that percentage even higher, because it is clear that women’s participation is a proven way to help an economy thrive.

MF: The Clinton Giustra Enterprise Partnership* works with communities in Latin America, while the Clinton Development Initiative works with smallholder farmers in Malawi and Rwanda. Why is it important for you to support rural agriculture, and local communities, abroad?

BC: As the Anchor Farm Project illustrates, investments in rural agriculture and community empowerment have extraordinarily outsized returns – not only for the individual farmers, but also for their communities and their national economies. When you give people the opportunity to succeed through the dignity of their own hard work, it breeds optimism and expands everyone’s understanding of what is possible. That’s how countries begin building the systems and capacity that will enable future growth without reliance on foreign aid.

Let me give you another example. Cartagena, Colombia has enjoyed a tourism boom in recent years, but their hotels were still importing most of their perishable goods rather than purchasing them locally. There are thousands of skilled fishermen and farmers along Colombia’s North Atlantic Coast, but gaps in the supply chain prevented them from getting their goods into the city’s hotels, restaurants, and supermarkets.

The Enterprise Partnership, with support from the Carlos Slim Foundation, has worked directly with local producers to improve the quality and quantity of their yields, and to provide the distribution, warehousing, processing and logistics necessary to help them share in the region’s success. Over the last few years we’ve added about $3.5 million dollars to the total income of our small producers, which, given what they were living on, is a very meaningful boost. I recently visited a warehouse that we’ve finished restoring as part of the initiative, and I’m very optimistic that it will give even more people a piece of the growing economy.

MF: How are energy and climate change effecting food and farming? How are the initiatives and projects you are spearheading through the Clinton Foundation addressing these issues?

BC: Climate change is already negatively impacting farming and our world’s food supply. Warmer temperatures are killing crops and livestock, and disruptions in weather patterns – either too much rain or too little – can ruin an entire year’s harvest. I believe we are going to see droughts become deeper and more frequent, with particularly calamitous consequences in developing countries that lack the technology and capacity to adapt to changing conditions.

The good news is that sustainable agriculture can play a big role in reversing climate change. My foundation has helped smallholders in Africa establish community nurseries to reforest the land and reduce the amount of carbon dioxide in the atmosphere. The farmers are then able to harvest the fruit or fast-growing timber, and to further profit by selling carbon offsets in the international marketplace. The foundation also works to help countries report and measure their carbon stock, allowing them to better manage their forested land and reverse the effects of deforestation. Mexico City transformed itself from one of the most polluted cities on Earth into a model of sustainability, in large part because they increased their tree cover and found inventive ways to create rooftop gardens and other green space. If taken to a greater scale, these ideas could make a huge difference in the fight against climate change.

MF: What do you think are the greatest challenges for the world’s food systems, and what do you see as the best way forward?

BC: There are two fundamental challenges related to food production and nutrition. The first is that there are now seven billion people in the world and there will be nine billion by 2050, and we need to find ways to feed them all, and for them all to get the nutrients that they need. It is morally unacceptable to let children starve to death just because they were born in poor countries. To meet our food needs, we should not only continue helping smallholders improve their productivity, but also help countries that are prone to famine build up their basic infrastructure, not only to feed people today but to store food properly and to export it. Building on the existing network of small farmers is far preferable to throwing them off the land in favor of large-scale mechanized farming designed to produce exports to countries that can’t be self-sufficient but have the funds to buy food. The goal should be to meet their legitimate needs without the massive dislocation and turmoil that abandoning the small farmers would bring.

The second major challenge is that in the places where food is readily available, too many people are making unhealthy eating choices, which is leading to alarming rates of diabetes and other preventable diseases. Chronic diseases are responsible for 70 percent of deaths in the U.S., and type 2 diabetes alone adds an extra $150 billion in health care costs each year. The Middle East is also struggling with some of the highest diabetes rates in the world, and rising economies like India and China are increasingly dealing with these issues as more and more people leave rural areas for the cities.

I’ve worked to address these challenges in the United States through the Alliance for a Healthier Generation and the Clinton Health Matters Initiative. Our idea has been to bring as many people to the table as we can – food producers and distributors, beverage companies, health care professionals, and community groups – to help individuals make healthy changes and reform the systems that affect individual health. We’ve made some remarkable progress so far, including reaching a voluntary agreement with the soft drink companies that has led to a 90 percent reduction in the calorie content of beverages shipped to schools. I’m confident that with continued dialogue and cooperation, we’ll be able to turn the tide on this and other challenges to food systems around the world.