A white wooden sign with hand-painted, sky blue letters strangely proclaims: “Fresh Shrimp For Sale, Sat 9-12.” Drivers slow down or back up to see if perhaps their eyes have deceived them. Others boldly swerve, pulling into the gravel drive, following on foot the direction of a black arrow that points towards “SHRIMP SHOP.” Amidst […] 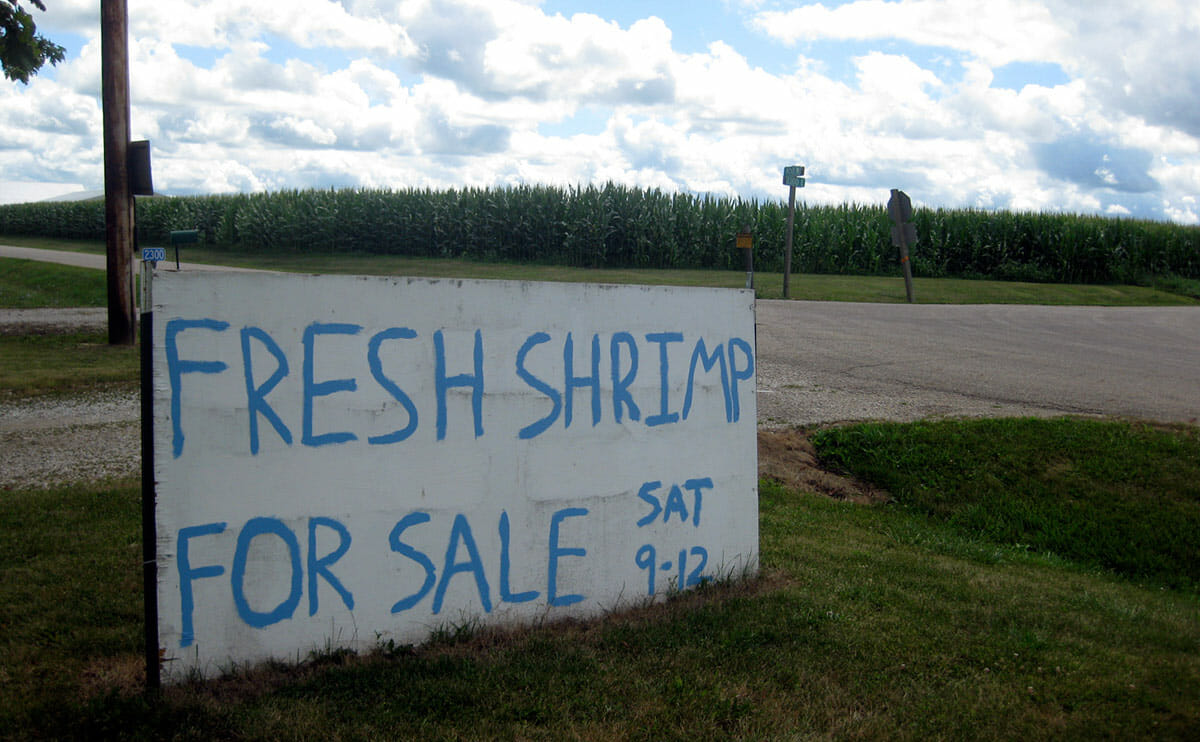 A white wooden sign with hand-painted, sky blue letters strangely proclaims: “Fresh Shrimp For Sale, Sat 9-12.” Drivers slow down or back up to see if perhaps their eyes have deceived them. Others boldly swerve, pulling into the gravel drive, following on foot the direction of a black arrow that points towards “SHRIMP SHOP.” Amidst the smell of saltwater and seafood, Dave Steiner leans over one of four 6,000 gallon swimming pools serving as tanks. His back to customers, you can see the back of his shirt. It reads, “Have You Ever Had Shrimp This Good?”

When he turns, a nearly translucent Litopenaeus vannamei or Pacific White Shrimp with peppercorn eyes is resting in his hands. It lays still for a moment, and then suddenly backflips and sails into the air.

Steiner, 41, is Illinois’ first saltwater shrimp farmer, one of a growing breed either switching to or adding aquaculture to their livestock business. This month marks the Steiner Farm’s first full year of production. Business has been building by word-of-mouth or via Facebook where he alerts followers when shrimp will be available. Customers tend to be a mix of local residents, sprinkled with chefs owning restaurants in nearby towns.

“Who buys our shrimp? People with two eyes and a passion for fresh, high quality local shrimp,” Steiner says as he moves around the shop in tall, black rubber boots. “The last time I checked the tanks, I didn’t see any oil spills, didn’t detect any heavy metals from pollution or industrial waste.”

‘Who buys our shrimp? People with two eyes and a passion for fresh, high quality local shrimp. The last time I checked the tanks, I didn’t see any oil spills, didn’t detect any heavy metals from pollution or industrial waste.’

Julie Davies, who for nearly a year had been passing the curious roadside sign en route to a nearby campground with her family, tentatively enters the Shrimp Shop. “So what’s with the shrimp, where are they?” she asks, looking doubtful. A resident of Normal, Illinois, Davies says that each time they saw the sign it they’d “crack jokes about whether the people selling shrimp “had a mud pile in their yard” or if behind the sign swam a fishy story. “We couldn’t imagine that it would be fresh,” she says.

In late July, a pact was made around the campfire. During her next swing down that road, Davies would stop and investigate. “No one back at camp is going to believe this,” she says when Steiner suggests she cook them with the head on for a “sweeter” taste. Or consume the head as an added delicacy.

About 12,000 shrimp live in one of Steiner’s 18 feet by 4 feet tanks. The three remaining tanks contain shrimp in different stages of growth. They’re delivered to the Steiner Farm as 45-day-old juveniles after being raised nearly from embryos at a farm in Indiana. Steiner will grow the shrimp until they weigh 15 to 18 grams — approximately 120 to 150 days old — and sell them for a very reasonable $18 per pound, $10 a half pound. That yields about 24 fresh, clean crustaceans per pound.

It’s a little hard to see the juvenile shrimp in the tanks but Steiner claims that beneath the foamy, cinnamon-colored water, the little guys are swimming gracefully. To create an ocean-like environment, he added sea salt, the same used in most aquariums, at a level of 10 parts per thousand. The water is cleaned by a recirculating aquaculture system, recycling it while beneficial bacteria breaks down waste. The shrimp are fed a protein-rich pellet containing fish meal, soy and corn.

Farm-raised, saltwater shrimp are described as meatier, larger and fresher-tasting than shrimp brought from the Gulf or frozen shrimp shipped in from as far away as Asia. They’re so fresh that they’re still alive when customers carry them out the door, writhing in Ziploc bags stocked with ice. In high demand by many of the nation’s farm-to-table restaurants, the small but growing number of aquaculture shrimp farms nationally don’t yet produce enough shrimp to meet requests. According to Karlanea Brown, VP of operations at Indiana’s RDM Farms Shrimp Division, restaurants are putting in requetsts for as much as 300 pounds of shrimp per day – far more than the nascent Midwestern aquaculture industry can provide.

The Midwest is the hub of saltwater shrimp farming, but operations are rapidly expanding nationally with farms cropping up in Virginia, Nebraska, New York and Massachusetts. The draw? The fact that aquaculture can be lucrative, netting between $35,000 to more than $100,000 yearly. The average start-up investment is between $60,000 to $70,000, and shrimp farmers only have to tend to their tanks three to four hours daily.

Although he grew up working a 700-acre farm in Tremont, Illinois – “walking beans, driving tractors and raising hogs” – Steiner’s childhood dream was to be a marine biologist. In college, however, he earned a degree in agricultural economics and later became a high school teacher while still farming 50 acres. With a growing family (Steiner and his wife, Sandy, have seven children ages 15 to 3), Steiner left teaching to work for an office furniture assembly company 15 years ago and in his spare time began building a sustainable, diversified farming operation. Shrimp farming was a recent addition to the farm, with operations beginning in 2011, and Steiner selling his first farm-raised shrimp in August of 2012.

In addition to the shrimp, the Steiner Farm grows vegetables and plants. Saltwater from the tanks is used to water asparagus and artichoke plants. Shed shrimp shells are turned into the garden soil. They keep bees and chickens for fresh eggs, frequently selling at a local farmers market. Each of the older children oversees part of the production, with a son crafting handmade benches and picnic tables. His 15-year-old son designs the farm’s website and social media platforms to help build the business. In time, Steiner hopes to offer CSA shares, making the farm a one-stop-shopping destination.

Until then, he’s working to get word out that some of the best saltwater shrimp can be found in the middle of the corn and soy fields of Central Illinois.

At least one customer left the roadside operation a true believer. When Davies got back to the camp, she began telling everyone that behind the “Fresh Shrimp For Sale” sign was an actual saltwater shrimp farm. “Then I pulled out the bag with them on ice and I was the envy of the campgrounds” she says when reached three days later. Davies went camp-to-camp, gathering what she’d need to cook the shrimp over an open fire. Olive oil, spices. When grilled for just the right amount of time, hungry campers crowded in to get a taste. “They were delicious — the best shrimp I’ve ever eaten,” she says, “Since we’ve been back home I’ve been telling everyone, ‘You’re not going to believe this but down this road in El Paso…’”