More and more women are learning the art of butchering, aided by master butchers like Kari Underly. 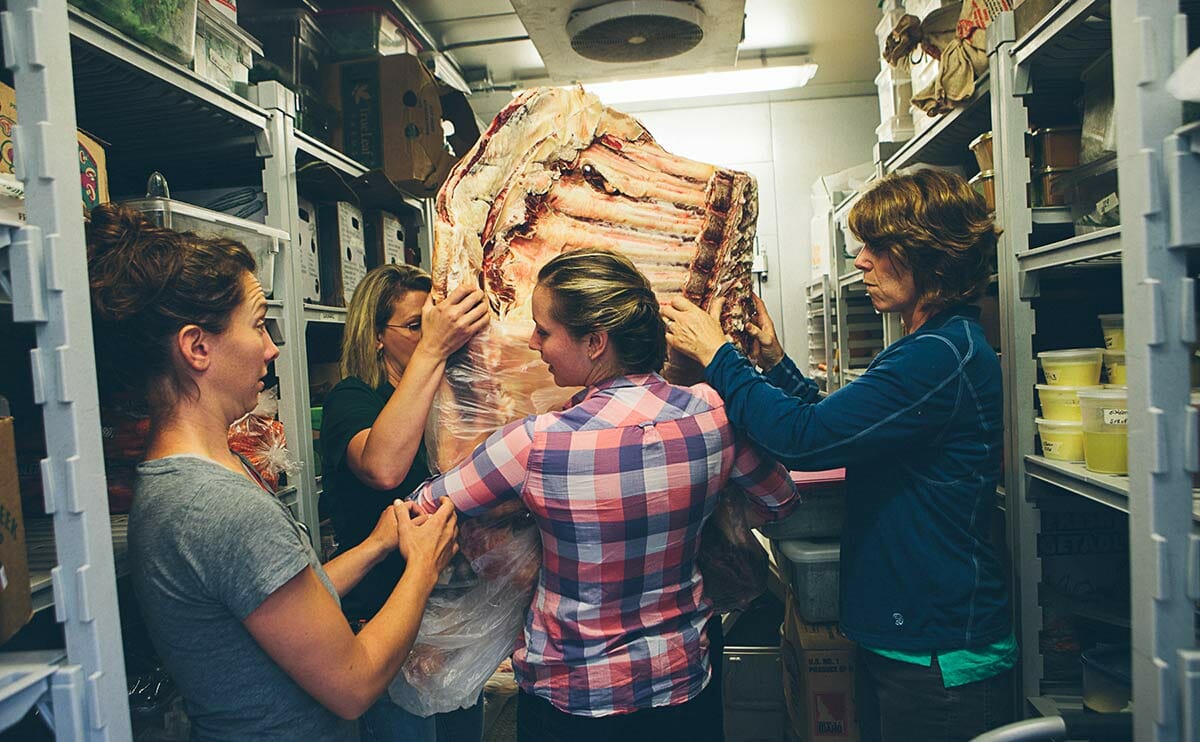 It’s a Tuesday morning in May, nearing 8:30 a.m., and master butcher Kari Underly gets to work. She slides a knife through every seam of flesh, her hand sturdy and her cuts swift.

“Know what to do with the kidneys?” Underly asks the intently watching, all-female crowd, as she grabs a slippery organ, her hand sheathed in a baby-blue latex glove.

A third-generation butcher, Underly maximizes every single cut of meat off an animal. Her calculated technique and skills have resulted in top accolades. Among them, she is partially credited for the invention of the Flat Iron steak and is a James Beard Awards Finalist for her book, The Art of Beef Cutting.

And she draws sold-out crowds to her workshops all over the country, like this one in Chapel Hill, North Carolina, where nonprofit organization NC Choices is hosting a two-day retreat exclusively for women in the meat business.

Women of varying ages are here to attend the retreat. Some are young, fresh out of sustainable agriculture university programs or farm internships. Others have been at it awhile and want to change their game, to offer a better product for a better profit. Livestock farmers, meat processors, butchers and chefs come eager to learn how to grow a viable business in the niche meat industry.

More than 30 percent of U.S. farmers tallied in the 2007 USDA Census of Agriculture were women. If farmers are increasingly female, the same seems to be happening for butchers, meat processors on the slaughter floor and chefs. In the South, many of these women are unabashedly entering a male-dominated industry to craft their own innovative, sustainable businesses.

“All these women that are farmers and ranchers — they kind of have some balls, if you will,” Underly says. “They’re already pioneers.”

Underly herself learned to butcher from her family. Like most women during the Great Depression, Underly’s paternal grandmother butchered her own meat on the farm they lived on because it’s just what she did.

“She always had the odd bits on the stove, and she would always teach me. I didn’t realize she was teaching me about whole-animal utilization,” Underly says.

Her parents took the skill further and opened up a butcher shop in Lydick, Indiana, when Underly was a kid. They had it for a few years before it became impossible to make a decent living. Her father closed down shop to cut meat for the convenient competitor. And it was at that supermarket meat counter that Underly found her high school gig – and her career.

“My dad wasn’t too happy when I decided to make a career out of it, because, unfortunately, he saw the decline of the profession,” she says. “I saw what it did to my parents’ business and marriage. It’s hard to make it work, and that’s why I’m so passionate about the business side — to really understand how the moving parts work.”

The idea of the all-female retreat in North Carolina arose after a general, statewide meat conference back in December, where many women participants expressed the desire to gather in a space where they could be heard, says Sarah Blacklin, NC Choices Project Coordinator.

‘Usually the farm is passed to the man in the family, not the woman. But a lot of us are having daughters, not sons. So that changes.’

“That’s the reality in North Carolina,” Blacklin says. “The need sparked out of ‘I don’t feel like I know who to talk to.’”

Pam LaHay traveled from Clinton, South Carolina, to attend the conference. Growing up, farm work was part of her daily routine. Today, she is a speech therapist who married a farmer.

“The farming network, it’s kind of like an old banking, old-boy network,” says LaHay, who raises meat naturally on pasture with her husband, and came to the class to learn about the right cuts to offer chefs. “It’s generational, and usually the farm is passed to the man in the family, not the woman. But a lot of us are having daughters, not sons. So that changes.”

Alease Williams of D&A Farm in rural Autryville, North Carolina, joined the North Carolina Natural Hog Growers Association with her husband a few years ago. They both came from sharecropping families and raised hogs commercially before switching to a free pasture model. Now their product is sold at some Whole Foods stores in the region, but they are still a small operation in a very rural town. She came to the retreat because she wants to broaden their customer base, as well as her opportunities for education.

“I would have never learned this on my own,” Williams says. “You get so much help just from listening to other people’s ideas.”

After just one session, Williams holds pages full of notes. On a diagram of a hog, an arrow shows where to find the tenderloin. Hand-written details in the margins explain how to separate it.

“Now I know I can speak up and know what I’m talking about,” Williams says. “Back then, I was less likely to say to a group of men, ‘Hey, I have an idea.’ Now I voice my opinion.”

Blacklin says the niche meat market in North Carolina is steadily growing, and she thinks it will slowly change the industry, leaving it more open for women to be active in every link of the supply chain.

“Knowledge is power, so that it isn’t this scary thing,” she says. “I see more women pervading the system – whether it be processors, whether it’s farmers – that might be solo. It’s not just someone’s wife.”

I grew up in the 50s & 60s butchering rabbits and chickens. After doing military service, I drove long haul and married my co-driver…a hunter and a 16 yrs beef boner. From him I learned to butcher larger animals, but he did all the cutting and I wrapped. Now I wish he had taught me the cuts of different meats. I get the meat off my goats, but wonder if they are tough sometimes because of not cutting them up properly. Still good to have home raised meat.