Istanbul had urban farms way before they were cool. Now, developers have started bulldozing these important green spaces. 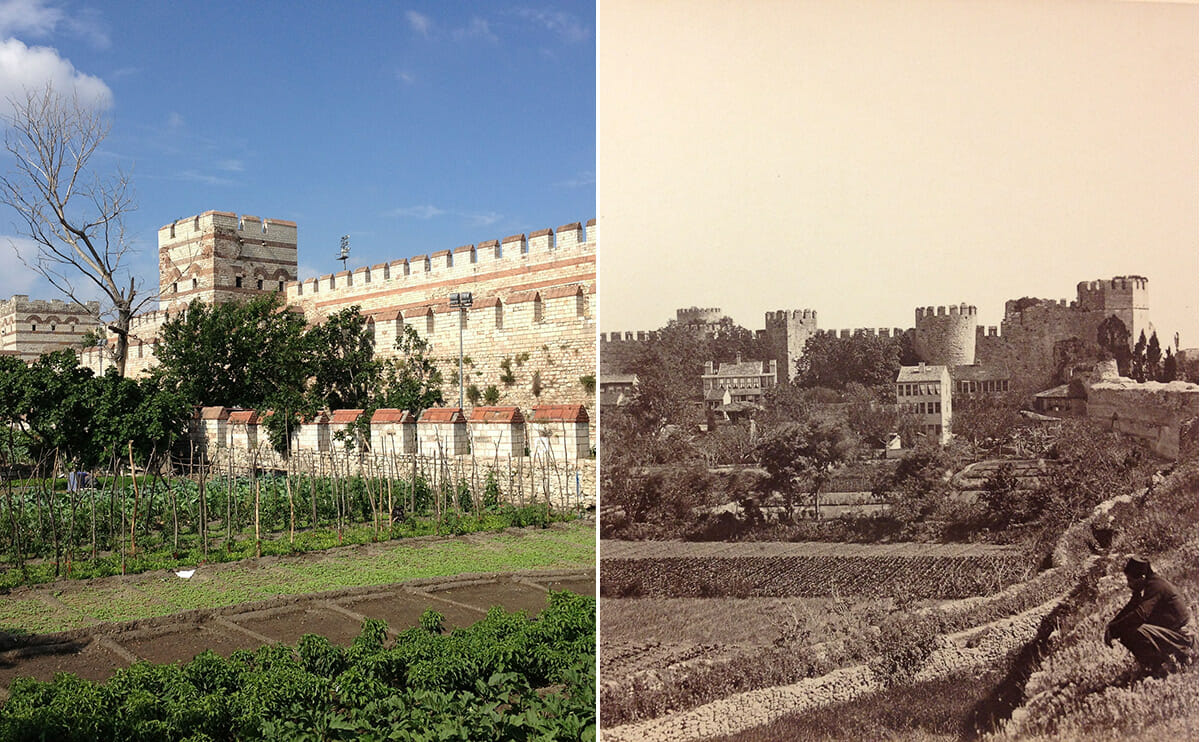 Walk inside Istanbul’s magnificent old city walls, and you will see something surprising: a thriving network of farms situated in and around the bed of a former moat surrounding the fortress. First built in the 5th century, these Byzantine stone boundaries stretch for about three miles between Yedikule (or the “Seven Watch Towers”) and extend toward the banks of the Golden Horn. Rooftop gardening may be trendy now but the Yedikule district has been home to these fields for hundreds of years. Even today, the green plots produces tons of produce and provide work for hundreds of people.

But soon, these urban farms might meet an inglorious end.

In a race to claim and maximize profit on valuable plots of land, municipal leaders are bulldozing this historic network of urban farms, a UNESCO Heritage site, in favor of a paved park.

On July 6th, the Fatih County Municipality, which manages the lands in and around the Yedikule neighborhood, began eliminating the majority of the working farms, called bostans, and covering their fertile soil with rubble. The Municipality claims that the new park will beautify a historic landmark in disrepair and make the area safer for neighborhood residents.

In fact, it’s unclear if a park will even be built. According to a front page story by Turkish newspaper this week, three different plans exist for what will happen to the the site, none of which have approval from the Association for Landscape Architects in Turkey. And only the plan distributed to the media originally even calls the entire space becoming a park, leaving the real possibility that buildings could go on top of the bostans.

In response, groups around the city have sprung up to protest the disappearing fields, which specialize in growing a certain kind of lettuce. Concerned citizens formed a coalition to create a school on the property, in hopes that educating city-dwellers about the farms will change people’s minds about the new park. As coalition member Suna Kafadar puts it, the issue goes deeper than just a park development – it’s a “symbolic protest.”

The farms “provide a unique opportunity to start a productive discussion about environmental history, urban sustainability and food security,” she says, “These bostans can also serve as an important historical example for the future of urban design informed by urban greening efforts in cities across the world.”

The loss of Istanbul’s urban farms would be huge. According to Aleksander Sopov, a Harvard doctoral student in history, Ottoman records indicate that the bostans in and around these fortress walls were first planted in the late 17th century. “This is the only historic city in a global context with such intensive agriculture in the middle of the city,” Sopov told Culinary Backstreets. “It is absolutely unique.”

Is Yedikule the Next Gezi? (Probably Not)

How old and how numerous are Istanbul’s urban farms? At one time, bostans could be found in almost every neighborhood of the Ottoman Empire’s “stomach capital.” Even though Istanbul earned its reputation as a trading port, with provisions such as wood, grain and sheep long flowing in from surrounding regions, producing local food was key to the city’s survival. Istanbul residents could not have made it on imported goods (subject to famines and droughts in its far-off locales) without regular supplies of fruits and vegetables grown in their backyard farms.

Istanbul has changed, obviously, since the height of the urban farming age. Although the city’s bostans still produced a great deal of food until the second half of the 20th century, they started disappearing rapidly in the 1980s due massive urbanization, growth, corruption and speculative investment in housing and development. In light of the city’s aggressive development and sprawl, some of the only remaining vestiges of its formerly lush topography can be discerned in the names given to its neighborhoods and streets. One can guess that the neighborhood of “BostancÄ±” for example, located on the Asian bank of the Bosphorus, once housed many orchards and farms — the word means “the site of the urban farmer.”

But there is still much activity in the Yedikule farms, as an early July visit showed.

Tilled by rural migrants from Turkey’s Black Sea region, the same crops are produced in the Yedikule bostans today as the ones grown there for centuries: Swiss chard, sorrel, purslane, arugula, beans, tomatoes, peppers, squash, eggplant, beets, turnips, corn, lettuce and figs. “At least 200 people work on the Yedikule bostans, which cover approximately 150,000 square meters,” says Sopov, again, speaking with Culinary Backstreets,”Most of them are families that rent that land and it’s usually their only source of income.”

The farms produce several tons of produce in their growing season, which lasts about five months. The production of locally grown, affordable organic produce offers a healthy food alternative for a city in which organic produce is both very difficult to locate and also unreasonably overpriced. The soil at the feet of the Byzantine fortress and at the site of the former moat remains fertile, thousands of years after workers stacked those stones.

But all of that is slated to be gone soon, unless a group dedicated to the farm’s preservation can stop it. Thus far, the group’s efforts have had some success. When newspapers throughout Turkey (and in the U.S.) carried stories and op-eds defending the bostans against the municipality’s park development scheme, noting that the construction plans violated the conservation laws protecting the bostans, the Municipality temporarily suspended the park project.

Taking a different tact, coalition members recently teamed up with the tenant farmers to form a school on site that will share information about the site’s history as well as providing hands-on instruction on permaculture farming. When the school’s participants assembled for their first class meeting on July 31, however, neighborhood residents disrupted the meeting in objection, and the police soon removed the school participants from the area. The activists will not be deterred, however: they say that this event has only strengthened their resolve to reach out to neighbors about the importance of the farms.

Ironically, while Istanbul’s historic fields remain imperiled, other cities have been rushing to add more green space and sustainable food options. Los Angeles, for instance, just installed its first fruit-producing public park, while Bangkok has made waves by working with local residents to turn skyscrapers and office parks into blooming urban farms. While many global metropolises are moving towards growing food within city limits, Instanbul in danger of losing agriculture’s future by hastily discarding its past.

Born in Istanbul, Berin Golonu is a doctoral candidate in the Graduate Program in Visual and Cultural Studies at the University of Rochester.