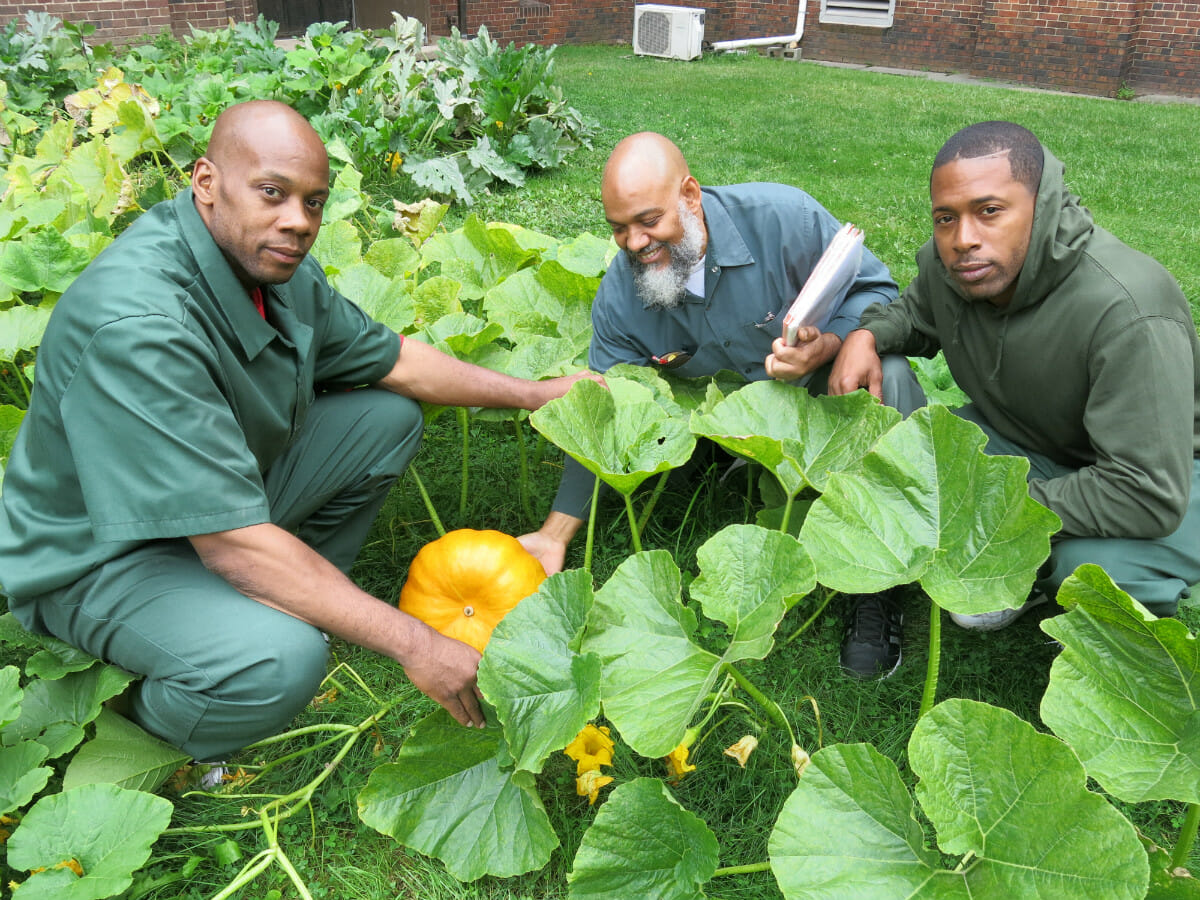 It’s an off-brand bakery treat, with a chemical aftertaste and an essay’s worth of weird ingredients. Cheap and sweet, Honey Buns have long held supremacy as the prison’s top snack. But recently, a different munchie has threatened to unseat the bun.

“Now you’ve got all these guys like, ‘Hook me up with some of them kale chips!'” says Jocelyn Apicello, a visiting public health professor at the prison.

Woodbourne is a medium-security men’s prison, situated in Sullivan County, New York (historically known for hosting Woodstock, currently known for its Hasidic vacationers). You end up at Woodbourne on robbery or manslaughter charges; maybe good behavior gets you transferred in from a tougher facility. It’s a largely conventional prison, for largely conventional prisoners. With one caveat: It’s unlikely you’ll learn to massage and dry kale at most other lockups.

Apicello teaches with the Bard Prison Initiative, a program at six New York State prisons, where participants have a chance to earn liberal arts college degrees behind bars. But only at Woodbourne is there a sizable organic garden, anchoring a focus on food justice and nutrition in the public health program. Student inmates learn how to garden sustainably, how to cook the harvest and where these skills fit into the bigger sociopolitical landscape (food deserts, industrial farming, etc.)

On a recent Wednesday afternoon, five inmates gather in the courtyard garden. Amidst the peas and the pumpkins, the cabbage and the kale, a self-proclaimed capitalist is teasing his socialist friend. “At least my system works, man!” But when the razzing turns to roughhousing, a third inmate gets serious: “Guys, do not step on those pumpkins!”

The intervenor is 33-year-old Domonique McClain, at Woodbourne for robbery in the first degree. McClain can’t wait for the pumpkins to be ready — he’s got big plans to make a pie. Cooking is one of the best-loved parts of the program, and with reason. Another inmate brags he can make a salad that would cost $20 in a Manhattan restaurant, packed with strawberries, cherry tomatoes and Swiss chard. Yet another can give you the recipe for a zippy lemon basil pesto (if you ask him nice).

By comparison, every meal in the prison cafeteria comes from pre-made meal baggies, frozen for up to seven years before microwave reheating. The contrast is severe. “Before (the Bard garden), I can’t remember the last time I ate a fresh vegetable,” says inmate Anthony Rose, who’s been locked up since 1992.

Bill Jett spent over half of his 50 years behind bars, convicted of murder and arson. When the Woodbourne garden started a few years ago, he was one of the initial participants. “It wasn’t the first time I had gotten my hands dirty,” he jokes, “but I’d never actually worked in a garden before.” Released in 2011, he’s since parlayed his prison education into a job he loves – Jett works full-time for GrowNYC, the nonprofit in charge of New York’s farmer’s markets. He’s a full-time member of its compost team, and loving every minute of it. Jett is also working on his master’s in Urban Planning at NYU.

Now, participants from the program, for that too-short window when produce is harvested in the Northeast, have an embarrassment of riches. They snack on cherry tomatoes and snap peas and bits of lettuce while they work — “Better than candy,” says inmate Javier Gomez — with plenty left over for cooking later. The garden gives such a generous harvest that 500 pounds of produce gets shipped to local food banks each year.

Naturally some would argue prison isn’t supposed to be cushy, with Manhattan-level salads and fresh-baked pie. But Deputy Warden Jean King says that program participants are “cream of the crop,” chosen for their model behavior and intellectual curiosity. Their crimes are serious — more than a few are in for murder — but they’ve shown a capacity for reform.

Many program lessons are straight-up horticulture: soil quality, composting, organic pest control (e.g., cinnamon on cabbage leaves). But Max Kenner, BPI’s founder and director, is adamant no one calls it vocational training. “We’re trying to cultivate the imagination of our students,” he says.

That’s why garden lessons are accompanied by classroom time, reading books like Good Food Revolution and The Omnivore’s Dilemma. Gardening is seen not just as a path to eating well, but as a way of reclaiming self-sufficiency.

Apicello, who owns a small organic farm in addition to her teaching gig, loves when students get worked up about food issues. “They never had the language to express, like, ‘Why are there no fresh grocery stores in my neighborhood?'” she says. “It’s such an ‘A-ha!’ moment when they start to put these issues in a bigger context.”

Food activist Marion Nestle gave the commencement speech for the 2010 BPI graduating class. In it, she gave graduates their marching orders: “Growing food is about giving individuals and communities the power to control their own resources. I cannot think of anything more revolutionary.”

Richard Gamarra, 25, only has 90 days left on a five-year stint for assault. He plans on bringing the revolution home, taking over his father’s garden and teaching his six-year-old son how to grow. But before that, he’s looking forward to his first meal outside. “Before this program I probably would’ve headed for McDonalds. Now I’ll go straight to the farmers market!” Gamarra laughs.