Scientists suspect weight-gain supplements called beta-agonists are likely responsible for a surge in cows arriving for slaughter at U.S. meatpacking plants in weakened states, reports the Wall Street Journal. The use, and possible suspension, of these drugs puts feedlot farmers in a tough place. Beta-agonists help steers get up to slaughter weight while saving on […] 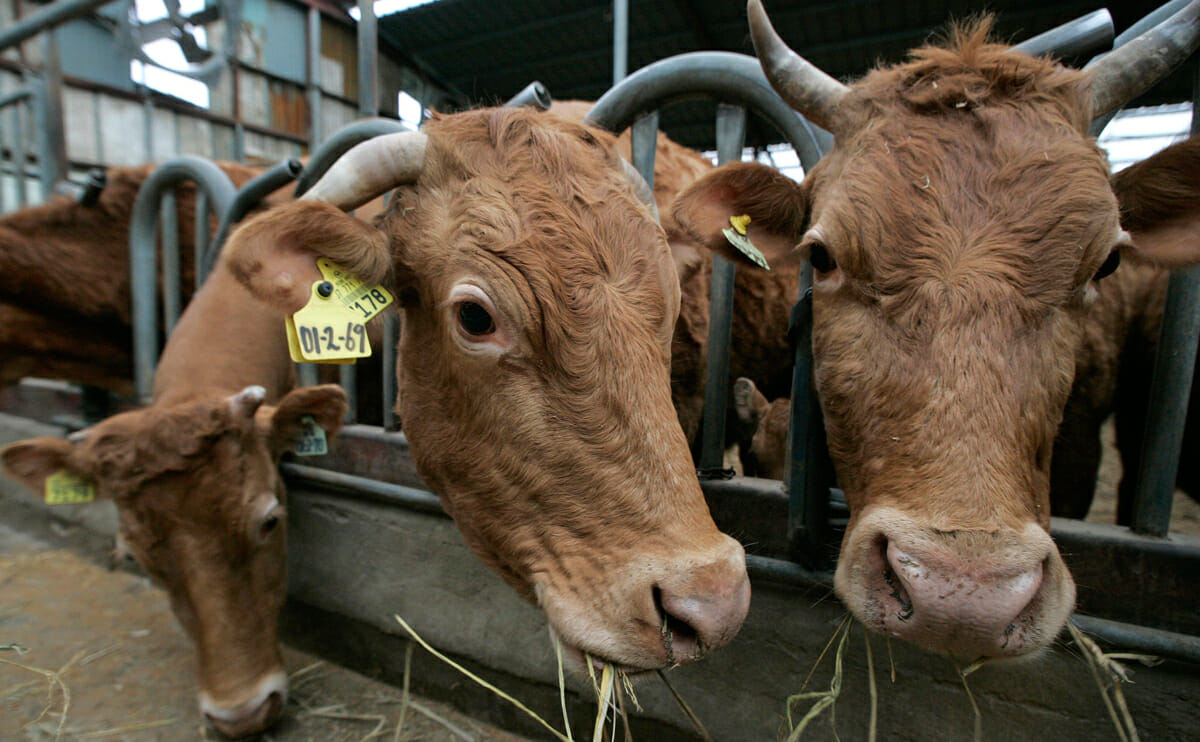 The use, and possible suspension, of these drugs puts feedlot farmers in a tough place. Beta-agonists help steers get up to slaughter weight while saving on high-cost feed, but the practice might be weakening the steer.

The drugs are given to steer during their final weeks to promote lean muscle weight gain, and the drug can help add over 30 pounds of weight. Although the drugs have been around for about ten years, they have recently become more widely used. Feedlot workers and scientists have seen steer with their tongues hanging out, having difficulty walking, and exhibiting strange sitting behavior.

The research into these beta-agonists has led Merck &Co. to temporarily suspend sales of Zilmax (nicknamed Vitamin Z), one such feed additive and has shed light on the controversial practice.

Tyson Foods announced that it would no longer accept cattle fed Zilmax before sales were suspended, but other major meat packers have no plans to suspend the use of beta-agonists.

The practice of feeding steer beta-agonists is particularly helpful to cattle producers during droughts when feed costs rise, Reuters reports:

Soaring feed costs in the wake of the worst U.S. drought since the Dust Bowl and fierce demand for light corn supplies by ethanol makers resulted in cattle ranchers thinning herds. That led to too few animals to fatten up and too many feedlot operators and packing houses scrambling to get them. Adding to the industry’s woes, U.S. retailers are reluctant to raise prices in fear of alienating recession-weary U.S. consumers, who are willing to shift to less expensive proteins such as chicken and ground beef.

While the drugs save farmers money on feed, they take away from their ability to time slaughters to get the best market price. Mike Callicrate, a cattle producer in Colorado Springs, Colorado, told the Wall Street Journal, “‘Now, you only have so many days after an animal has been fed [a beta-agonist] before it’s got to go to slaughter or it becomes so lame it can’t move.'”

About to start goat and cattle farming

Popular
A Once-Forbidden Fruit Makes a ResurgenceShelby Vittek
7 Smokable Plants You Can Grow That Aren’t MarijuanaBrian Barth
Happy 50th Birthday to the Berkeley Restaurant that Launched Farm-to-Fork EatingPaul Freedman
Goat Sex: Everything You Wanted to Know But Were Afraid to AskAndrew Amelinckx
6 Differences Between Llamas and AlpacasAndrew Amelinckx
Explore Modern Farmer
Related
Animals
Move Over Goats. Cattle are the New Fire Fighters in TownLindsay Campbell
Animals
Koch Foods, Pilgrim’s Pride Executives Indicted in Chicken Price-Fixing CaseDan Nosowitz
Environment, Plants
Vegetables Aren’t Always VeganEmily Baron Cadloff
Animals, Food & Drink
Rancher Co-ops Offer Meat-Processing Solution For Small FarmersCatie Joyce-Bulay
wpDiscuz
We use cookies on our website to give you the most relevant experience by remembering your preferences and repeat visits. By clicking “Accept”, you consent to the use of ALL the cookies.
Cookie settings ACCEPT
Privacy & Cookies Policy