When farmers experience crop lose due to extreme weather, crop insurance is there to help them out. In many ways, the insurance that farmers buy is not unlike car, home or health insurance. But a new paper from the Natural Resource Defense Council (NRDC) finds the payouts farmers received from the Federal Crop Insurance Program […] 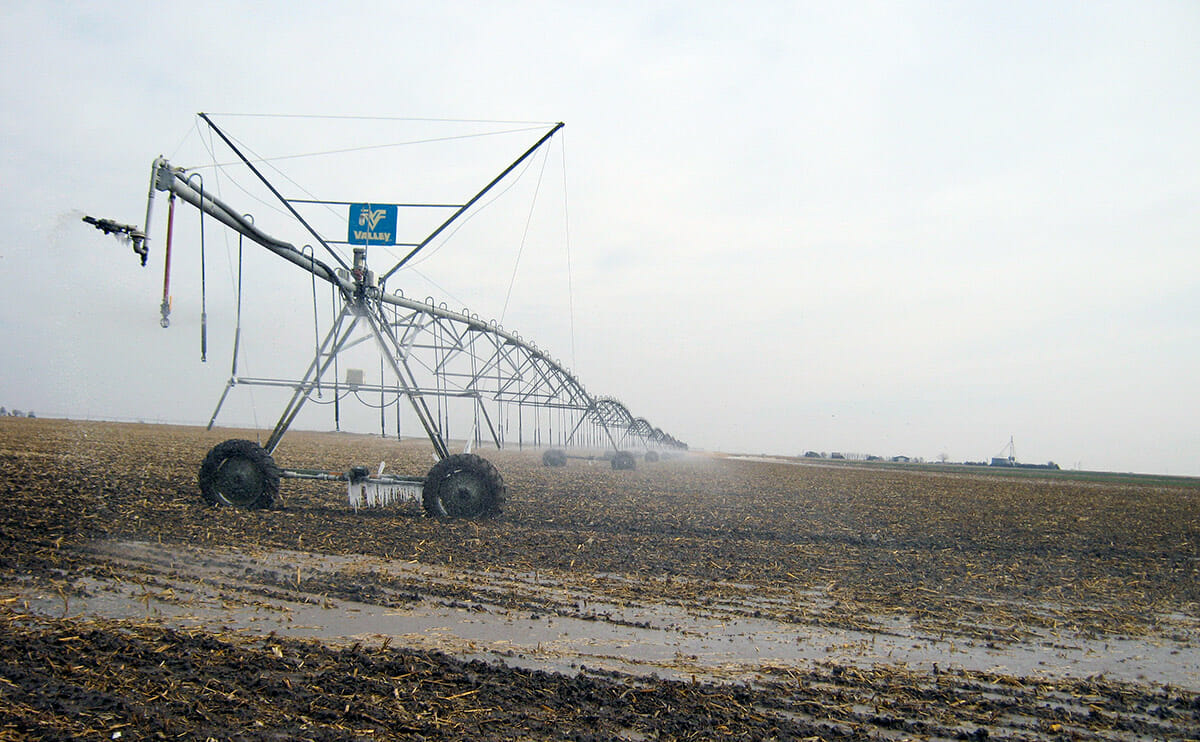 A sprinkler is in use near Dodge City, Kansas, November 26, 2012, during a historic drought that hit much of the United States.
Photography REUTERS/Kevin Murphy
Share
Tweet
Pin
Email

When farmers experience crop lose due to extreme weather, crop insurance is there to help them out. In many ways, the insurance that farmers buy is not unlike car, home or health insurance. But a new paper from the Natural Resource Defense Council (NRDC) finds the payouts farmers received from the Federal Crop Insurance Program actually encouraged farmers to take crop-loss risks — in effect rewarding farmers who take big gambles on extreme weather.

“It’s almost like a car insurance company charging more for a driver with an impeccable record than a driver who has been cited for reckless driving,” writes the NRDC.

The map will help users “really understand the scale of suffering that farmers are experiencing in their community,” says Clair O’Connor, an agricultural water policy analyst and attorney at the NRDC during a press call for the release of the paper. “Learning about what’s happening in your community is a powerful tool.”

The NRDC found that “the FCIP actually tends to encourage farmers to make riskier choices, such as expanding production to areas that are not well-suited to growing crops, or planting the same high-priced crops (like corn) year after year, or using methods that may increase short term profits but degrade soil health and productivity over time, because the high-risk farmers who do so are undercharged compared to their low-risk peers.”

The FCIP was created by Congress in 1938 in response to the devastation of the Dust Bowl. It’s a public-private partnership between the US Department of Agriculture’s Risk Management Agency (RMA) and 18 private insurance companies. The FCIP covers 282 million acres — or roughly 70 percent of the country’s farmland.

The NRDC is not disputing that times have been tough for farmers. Records breaking droughts and floods have hit the country’s agricultural regions. But scientific experts and the USDA only expect climate change to make things worse, meaning last years’ payouts to farmers of $17.3 billion — an all-time high — may become the new norm. 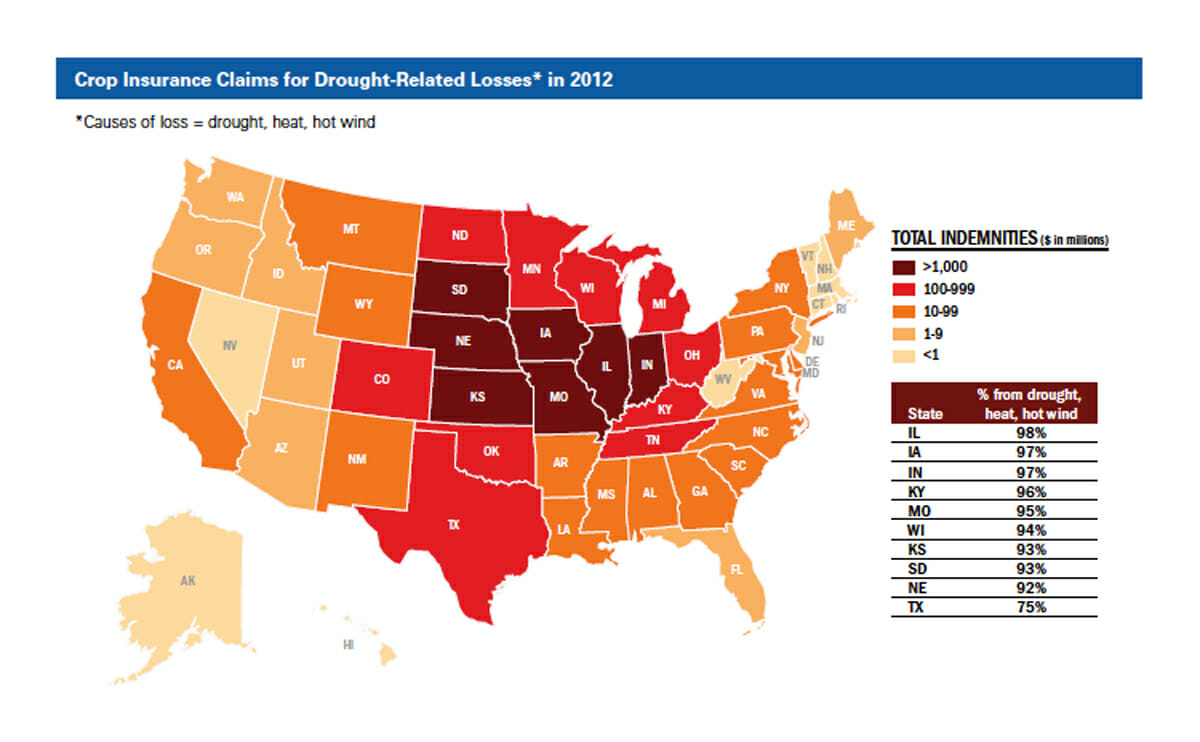 But NRDC argues farmers can and should be incentivized to take steps to reduce risks of crop loss by using farm management practices that build soil health and reduce the risk of crop loss, as well as lessening the environmental impacts of agriculture. The organization is recommending a pilot program that would lower premiums to low-risk farmers and encourage more farmers to adopt these low-risk practices.

O’Connor thinks that “farmers should welcome this opportunity. Cheaper crop insurance really is what we’re proposing.”

As the policies stand now, this is not the case. Take, for example, cover cropping — crops grown with the specific purpose of building soil health and increasing biodiversity on farms that focused on growing major commodity crops. As the FCIP policies stand now, farmers are financially discouraged from using this farm management practice, the NRDC writes: 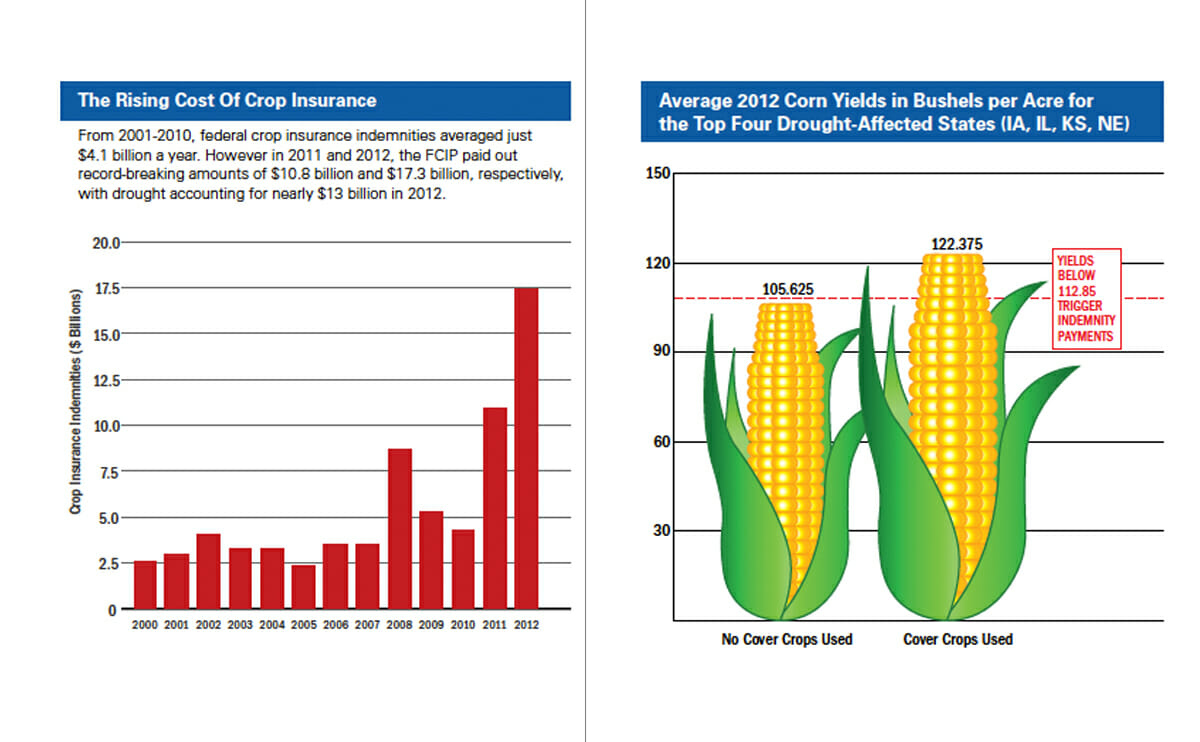 Instead of being “a crutch on which farmers will increasingly be forced to lean while taxpayers pick up the every-growing bill” the NRDC recommends that the FCIP take steps to encourage the health of their soil.

“Healthy soil is one of the most effective and time-tested insurance policies we have,” says Gabe Brown, a Great Plains farmer and soil champion, who spoke during a press call for the release of the paper. “Farmers are looking for ways that they can cut input costs, and the number one way they can do that is focus on soil health,” he says. “My most important farming secret is soil.”

A pilot plan like the one the NRDC has proposed is feasible. “According to the law that governs FCIP, insurance companies may petition the RMA to reduce premium rates below those set with the standard formula,” the NRDC writes.

“The next steps are to find partners in the crop insurance industry,” says O’Connor. “And get this thing on the ground so we can start making our farms more resilient.”

“Each farmer that takes these steps can help,” says O’Connor. “It starts with Gabe, and it grows from there.”

Related
Environment, Plants
Will Hempcrete Ever Catch On?Judith Matloff
Food & Drink, Plants
How Vermont Became an Unlikely Hotbed for SaffronSophia F. Gottfried
Personal Essay, Plants
Learning to Grieve and Grow In My Community GardenEsther Tseng
Food & Drink
The Medieval Origins of Thanksgiving DinnerKen Albala
wpDiscuz
We use cookies on our website to give you the most relevant experience by remembering your preferences and repeat visits. By clicking “Accept”, you consent to the use of ALL the cookies.
Cookie settings ACCEPT
Privacy & Cookies Policy