The first year Missoula played Cow Pie Bingo, it was raining; Blessame the cow was not in performance mode. 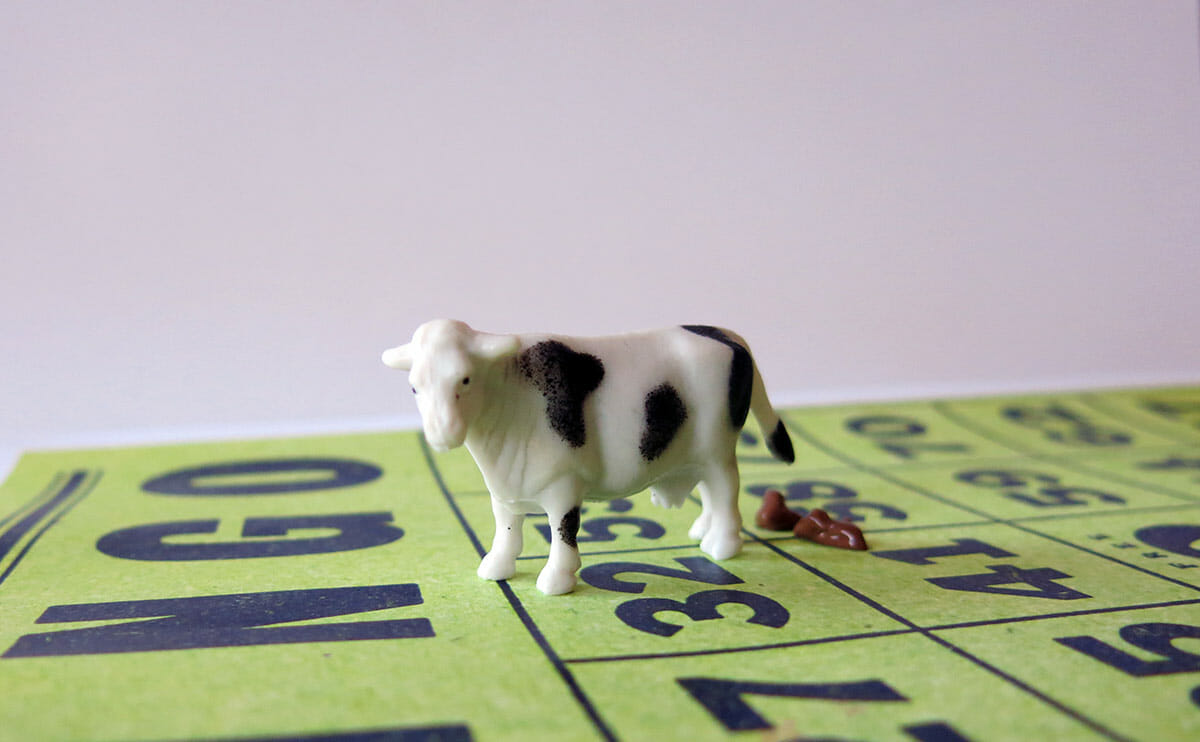 The first year Missoula played Cow Pie Bingo, it was raining; Blessame the cow was not in performance mode.

For hours, a large crowd of spectators watched her roam around the playing field, wondering when they’d get a show. Finally, five hours into the contest, Blessame pooped. The crowd erupted in cheers, then went home.

“We had two women in the audience who were very pregnant,” said Liz Manley, a fundraiser for Missoula Catholic Schools. “We were afraid they’d give birth right there on the field!”

In one case, PETA accused a Pennsylvania high school of feeding a laxative to the cow.

A grid is set up, typically on an outdoor field, comprised of numbered, one-yard squares. Spectators buy tickets that stake out a specific square. If Bessie chooses your real estate to do her business, then shazaam: You’re a winner, with prizes running upwards of $10,000.

Typically only one cow takes the field, but flashier fundraisers release up to four. In multi-cow play, the first dookie earns a grand prize, with lesser awards for second and third poopers.

Some onlookers will try cajoling the cow to visit their plot; “Come over here, I’ll rub your belly!” one spectator yelled in Wells, Minnesota. To stave off this kind of trickster, the town of Anaconda, Montana doesn’t allow its cows to go free-range. They are led around by harness, ensuring equal time spent in each square. It may seem like an austere approach to a light-hearted game, but consider the stakes: Anaconda’s game pot was $6,000 this year.

In Missoula, the playing field is bounded by an electric fence. Purportedly this is to keep Blessame from escaping – one year, she made a break for freedom – but Manley admits it helps with rowdy spectators. “We really want to discourage people from startling the poor thing,” she said. “The fence keeps ’em at a distance.”

An annual game near Santa Cruz, California, made the distance even farther – you play from home. In response to waning attendance, their bovine bingo has now gone virtual. You can still view the game IRL at the Kersten Ranch, but organizer Tamera Smith said not a single person took that option this year.

The Kerstens kept a California vigil with Bessie, “drinking champagne and eating strawberries” on their porch until she dropped her plop. Winners were notified by email. “This is Santa Cruz,” said Smith. “[Ticket-holders] were probably out surfing, hiking, eating some gourmet goodies.”

To combat poop-shy heifers like Blessame – one year it took eight hours to do her business – some towns institute time limits. If the magic hasn’t happened by a certain hour, plot numbers are chosen by raffle: certainly an anticlimax.

Another issue: It’s not like cows will reliably poop within the lines. What happens when manure lands in multiple squares? Turns out, it’s all in the percentages. There’s typically a judge who determines which square contains the most dung. Manley said they’ve been able to eyeball winners thus far, but are prepared to use a scale in close cases – the cow bingo version of a photo finish.

PETA has staged protests at some cow pie bingo games, claiming that a) the game is disrespectful to cows and b) yelling fans amount to animal cruelty. In one case, they accused a Pennsylvania high school of feeding a laxative to the cow. (Manley says: “Cows are pretty much always pooping. You really don’t need to give them a special diet.”) These protests are largely ignored.

For her part, Blessame has developed into a Missoula star in the last decade. Over the years, she’s learned not to drag it out for five hours, but also not to let fly too quickly. “Blessame is quite the showy little thing,” said Manley. “She’ll prance up to the crowd, make a little noise to get everyone cheering. Sometimes she’ll make it look like she’s about to go, then she’ll lie down, or pee. After an hour and a half, maybe two, long enough for people to eat a burger or a hot dog, she goes.”