Our 12 Favorite Farmers on Film

Crop circles, talking pigs, hearing voices in the field–the things Hollywood farmers have to put up with! We know that farming isn’t like it is in the movies, but we can’t help but get lost in Hollywood’s version of the rural life. Whether it’s a completely different world or a land not all that far […] 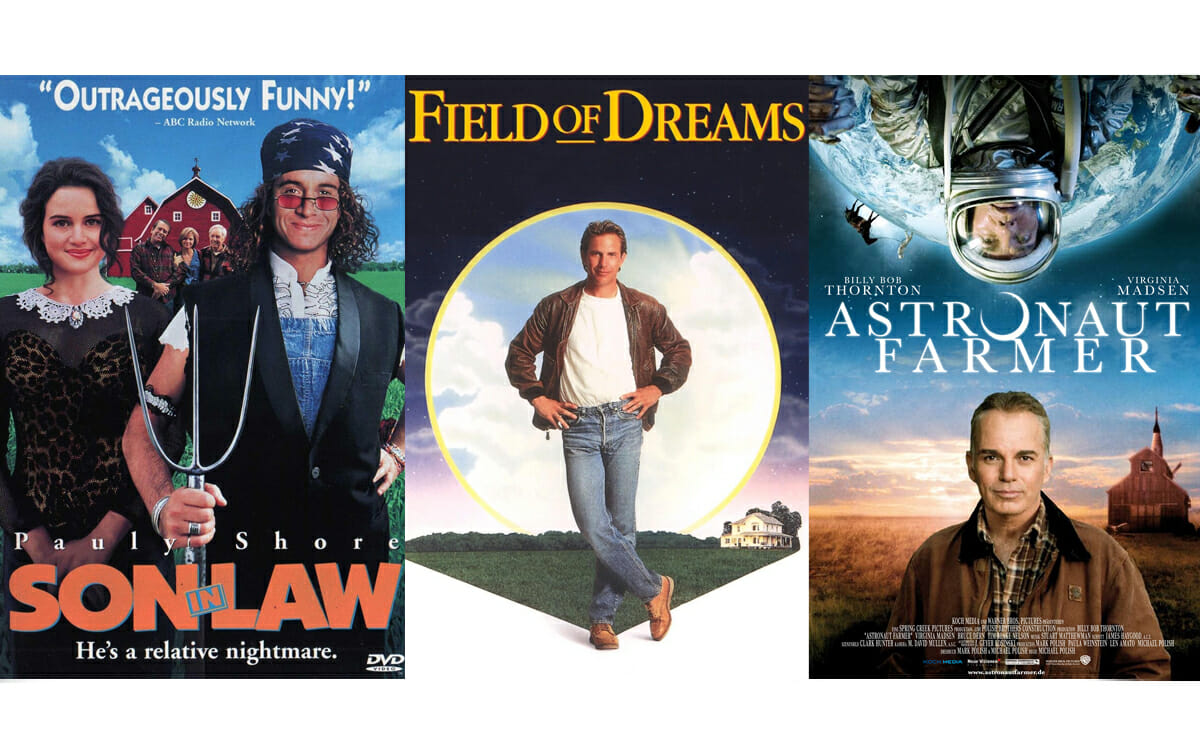 Crop circles, talking pigs, hearing voices in the field–the things Hollywood farmers have to put up with!

We know that farming isn’t like it is in the movies, but we can’t help but get lost in Hollywood’s version of the rural life. Whether it’s a completely different world or a land not all that far away, a farmer’s story seems to stand out in films.

Here are 12 of our favorite farmers on film:

Kevin Costner as Ray Kinsella in ‘Field of Dreams’

The plot might focus on baseball, but the action takes place in corn fields.

Sure the pig steals the show, but Hoggett is always silently by his side.

Paul Rudd as Ned in ‘Our Idiot Brother’

Every family should have a bio-dynamic pot-growing farmer.

Favorite farm quote: “I’ve got to get back to work on the tomonion — it’s a cross pollination between a tomato and an onion. Think of the time it’ll save when you’re making spaghetti sauce.”

A long time ago in a galaxy far, far away you farmed things like moisture. Luke was raised on the Lars family moisture farm until he was 19.

Favorite farm quote: Officer Caroline: “What kind of a machine bends a stalk of corn without breaking it?”
Graham Hess: “It can’t be by hand, it’s too perfect.”

Speaking of GMOs, this portrayal of modern-day agribusiness centers around a farmer (Quaid), who plants and sells genetically modified seeds, and his son (Effron) who doesn’t want to join the family business. Roger Ebert reviewed the film before he died calling it “brave, layered” and compared it to the next film on our list.

Favorite farm quote: “Am I a happy man? How can I not be?”

Henry Fonda as Tom Joad in ‘Grapes of Wrath’

A young man returns home to his family’s farm after a stay in prison. It’s a grim movie, but (spoiler alert!) at least the movie’s ending is a little happier than the novel.

Favorite farm quote: “I been thinking about us, too, about our people living like pigs and good rich land layin’ fallow. Or maybe one guy with a million acres and a hundred thousand farmers starvin’. And I been wonderin’ if all our folks got together and yelled…”

Sally Field as Edna Spalding in ‘Places in the Heart’

We like her. We really like her as a farmer. Also depression era farming was no fun.

Favorite farm quote: Bob MacDonald: “Right about August, we can begin to figure out more important offspring. Maybe five or six hundred of them.”

Bob MacDonald: “Why, chicks of course.”

Billy Bob Thornton as Charles Farmer in ‘The Astronaut Farmer’

He’s a farmer who wants to be an astronaut. So he builds a rocket in the barn. What could go wrong?

Favorite farm quote: “We’ve gotta get this space cowboy’s head out of the clouds.”

They left one field for another, but they were always milkmaids to us.

Pauly Shore as Crawl in ‘Son-in-Law’

The family farm was never the same.

Favorite farm quote: “Fresh off the farm, oh my God, I can’t believe it. Right across the hallway. Hallelujah. So you’re inbred?”

He’s not really a farmer; he’s a cop, who’s pretending to be an Amish farmer to protect a young boy who witnesses a murder. But we love the way he fumbles through his farming duties, proving how difficult the job is — particularly without modern technology.

Favorite farm quote: Jan Rubes: “You never had your hands on a teat before?”
John Book: “Not one this big.”

Popular
A Once-Forbidden Fruit Makes a ResurgenceShelby Vittek
7 Smokable Plants You Can Grow That Aren’t MarijuanaBrian Barth
Happy 50th Birthday to the Berkeley Restaurant that Launched Farm-to-Fork EatingPaul Freedman
Goat Sex: Everything You Wanted to Know But Were Afraid to AskAndrew Amelinckx
6 Differences Between Llamas and AlpacasAndrew Amelinckx
Explore Modern Farmer
Related
Animals
Move Over Goats. Cattle are the New Fire Fighters in TownLindsay Campbell
Environment, Plants
Vegetables Aren’t Always VeganEmily Baron Cadloff
Animals, Food & Drink
Rancher Co-ops Offer Meat-Processing Solution For Small FarmersCatie Joyce-Bulay
Lifestyle
10 Books about Food and Farming to Read This SummerShelby Vittek
wpDiscuz
We use cookies on our website to give you the most relevant experience by remembering your preferences and repeat visits. By clicking “Accept”, you consent to the use of ALL the cookies.
Cookie settings ACCEPT
Privacy & Cookies Policy