Kenya’s Best and Only Reality Show for Struggling Farms

Shamba Shape Up is a wildly popular reality show, with upwards of 10 million weekly viewers across Africa. Each week, two hosts cheerily descend on a struggling farm. They look for issues, tell the owners what they’re doing wrong, and give tips on how to shape up. It’s a familiar reality show format, with a […] 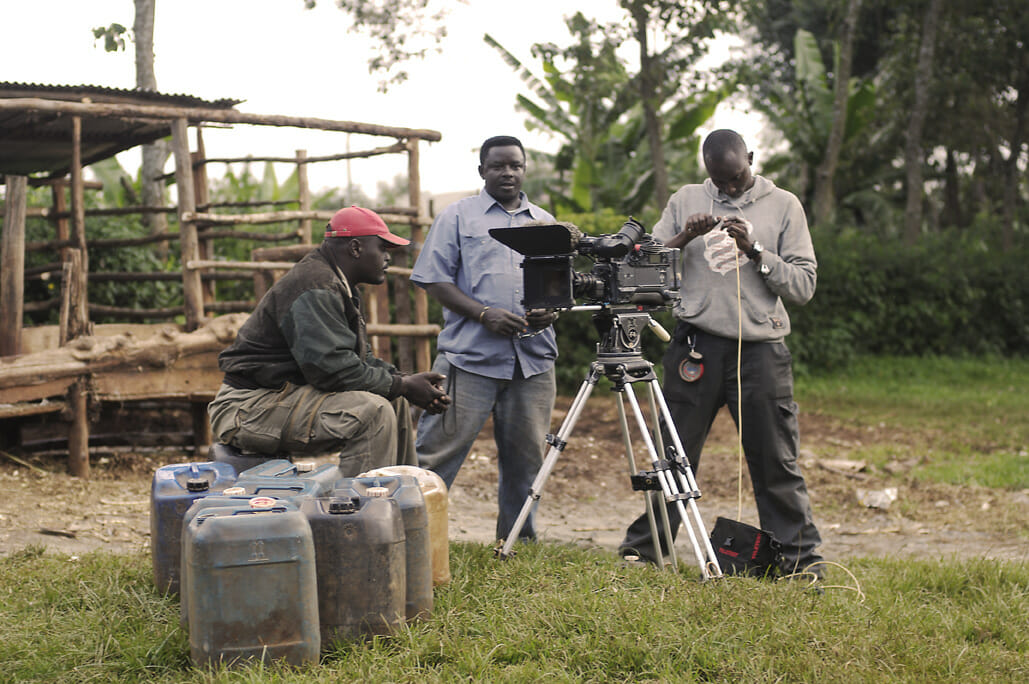 Shamba Shape Up is a wildly popular reality show, with upwards of 10 million weekly viewers across Africa. Each week, two hosts cheerily descend on a struggling farm. They look for issues, tell the owners what they’re doing wrong, and give tips on how to shape up. It’s a familiar reality show format, with a key variation: everyone is nice to each other.

Each week the show’s genial hosts visit a different farm (better known in Kenya as a shamba). They are highly sympathetic to each farmers’ woes, listening with warmth and compassion. Then, depending on the issues, they bring in targeted guests to give advice.

Kamau’s role on Makutano, playing a character called “Mama Vegetable,” made her the most famous actress in Kenya.

Dealing with potato blight? Try these new disease-resistant potato seeds. Cows losing their hair? They probably need deworming. Need water? Here are some rainwater harvesting tactics. The show covers any and all ag topics, like removing ticks from livestock, composting and building an apiary.

“It wasn’t that these farmers didn’t have the land or the capacity to succeed,” Campbell said. “Mostly – and I wouldn’t call this a huge epiphany – no one was giving them information.”

He styled his next radio program after The Archers – the longest-running soap opera in the world. The Archers was a British show created with the UK’s Ministry of Agriculture; lessons on healthy eating and growing vegetables were embedded in the melodrama.

Campbell’s show was similar, a 15-minute program centered on farmers and the rural life. Characters included a local ag extension worker and a federal agricultural officer. There were “goodies and baddies” – some farmers tried to do things the right way, and others were lazy and greedy (a la Goofus and Gallant). Naturally, the baddies got their comeuppance, while the goodies were well-rewarded.

For a time, this was the most popular radio program in Kenya. Every Sunday at 8 p.m., Campbell said virtually the entire rural population would gather around their radios to hear the latest installment.

By 2004, it was time to make the leap to TV. Previously, television sets had been too expensive for most farmers. But for $50, roughly the price of a small goat, rural Kenyans could now pick up an off-brand Chinese TV set. “Rural television viewers were the great ignored demographic,” Campbell said. “It’s the last TV sales frontier.”

Makutano Junction, the TV version of Campbell’s radio soap, is still on the air today. Eventually the lessons became less farm-specific, tackling HIV prevention and how to use electronic voting machines. Shamba Shape Up was created as the just-as-entertaining reality show that would focus on delivering ag lessons.

For $50, roughly the price of a small goat, rural Kenyans could pick up an off-brand Chinese TV set.

Shamba is hosted by Tonny Njuguna and Naomi Kamau, both Makutano Junction alums. Campbell says Kamau’s role on Makutano, playing a character called “Mama Vegetable,” made her the most famous actress in Kenya.

To keep audience attention, the hosts like to goof around – doing little dances, teasing each other, running around in the pig pen. Nobody is yelling; smiles abound.

After each episode, you can text the show’s creators and request a brochure on any topic covered. Four to six thousand brochures are now sent out each week, with numbers steadily increasing.

To maximize viewership, each episode is produced in English and Swahili. Shamba Shape Up is currently shown in three countries – Kenya, Tanzania and Uganda – but Campbell says 17 others have expressed interest. Still, no one has reached out from the developed world. Campbell suspects this may have something to do with Shamba‘s format. “It’s all very innocent,” he says. “It might not play well in the States.”

I wish to learn more about vertical farming business