G. Chris Andersen is in the premier league of Wall Street investment bankers. But now? Now he is obsessed with creating the perfect pig. 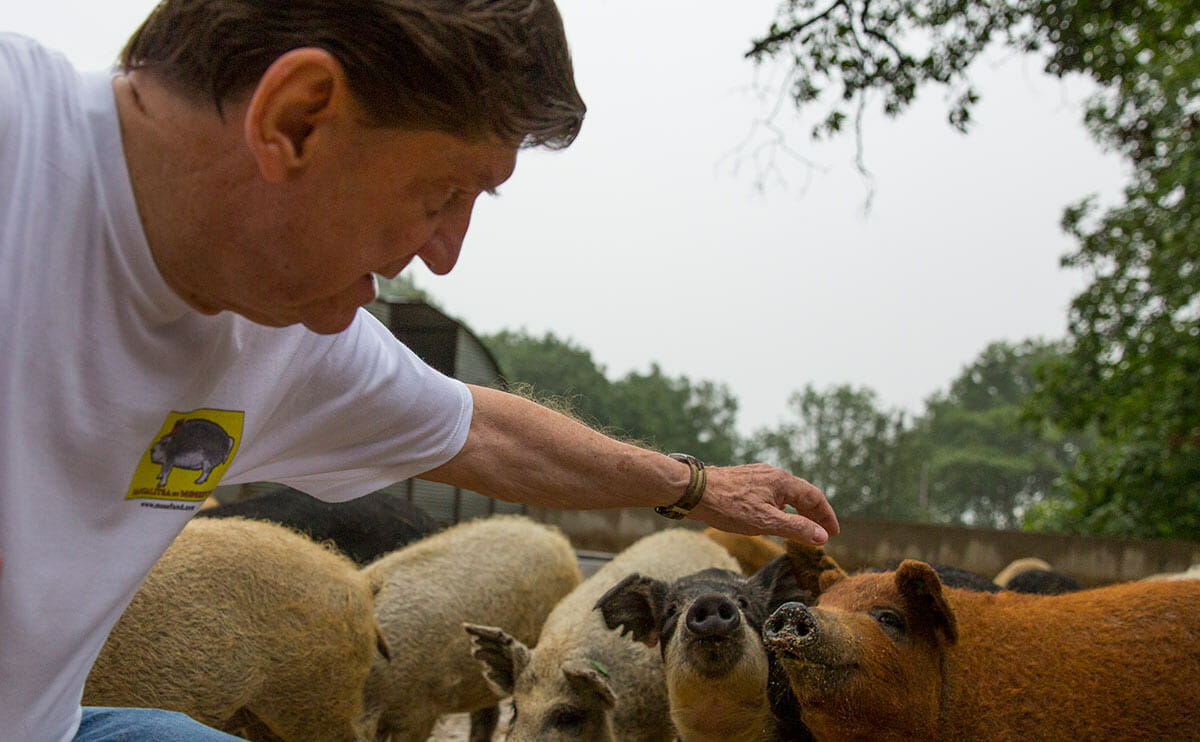 Andersen may also be on track to enter the elite ranks of pig farmers in a country that has taken locavore sensibility to a new level. But that does not mean his financial model is even rational at this point. Andersen’s wife, Sung, has told him that she would not cotton to his pigs dragging them squealing into bankruptcy.

Let’s start at the beginning. Andersen founded G.C. Andersen Partners, an investment banking firm with offices on Park Avenue and in Los Angeles, after years of deals at Paine Webber and Drexel Burnham Lambert. He also founded MØsefund Farm in the northwestern corner of New Jersey, its beautiful landscape intended as a gentleman farmer’s weekend retreat and horse boarding and training center, with Sung managing the horse side of things. None of this is out of the ordinary for a man of means, and things likely would have continued on their usual, leisurely course, except for the U.S. government.

You see, Andersen had tasted jamÁ³n ibérico, the paper-thin slices of Spanish aged ham found in the tapas bars of Barcelona, and was captivated, addicted and unable to find it in New York City. “I can get anything in New York,” he says indignantly, “but not jamÁ³n, thanks to the then import restrictions by the USDA.” Like most things that get Andersen’s attention, this began a quest. “I can raise a pig, I can make this stuff,” was the mantra. With the help of his chef, Peter Lambert, Pig 1.0 was born and raised – a Yorkshire Long, the standard-grade commodity pig we know in the U.S. Except: this one ate chestnut flour and goat’s milk. “The result was better than a factory-raised pig but not what I was looking for,” says Andersen.

Pig 2.0 was Berkshire stock. Although Sung thought it was a great-looking hog, she effectively ran Andersen and his experiment off the farm, as the new stock of pigs was disrupting the serenity of her horses. He moved the pigs up the road to a smaller piece of land he owned, rebuilt the barn as a piggery and continued the quest. “Two-point-oh was better, but still not enough pigginess to the pig.”

‘Pig 2.0 was better, but still not enough pigginess to the pig.’

More experimentation, more capital costs, with Andersen purchasing tools for the local golf club groundskeepers to gather acorns for his pigs. This begins to sound like a very sensible investment banker taking very unsound financial steps to get his own personal stash of ham. “As an economic model it was absolutely insane,” he says. Having known Andersen for some 25 years, I would parse this to be his intellectual love of the hunt. He is after a solution, not just the meat. This is, in fact, his natural drive to closing a deal.

Sometime during 2007 Andersen’s then-new chef, Michael Clampffer, heard about the Mangalitsa pig. The Mangalitsa is a heritage animal, raised by the imperial Hapsburgs in Hungary in the 1830s, cultured on the stock of German wild boar. It is obese, marbled with fat and, from all accounts, results in pork so good it sings like filet mignon in your mouth. One variation MØsefund now raises is called a Swallow Belly, sporting long, curly hair and black toenails. The key here is that the Iberian black-footed pig, source of the coveted Spanish jamÁ³n, is a descendent of the European wild boar, with the Mangalitsa being the other branch of the family tree. So Andersen was on target as far as evolution was concerned. We are now at Pig 3.0.

Pig 3.0 had some hands-on attention. Andersen did a pig tour of Spain, meeting his iconic animal face-to-face. He ate acorns in the forest with them and saw them eat 15 pounds of nuts a day.

Pig 3.0 had some hands-on attention. Andersen did a pig tour of Spain, meeting his iconic animal face-to-face. He ate acorns in the forest with them and saw them eat 15 pounds of nuts a day. “They literally pig out,” he says, not so tongue-in-cheek. Back at MØsefund Farm, he and Michael set to fine-tuning the feeding of his drove of 3.0s, adding barley to the mix of acorns, the magic ingredient in the feed for Kobe beef. In 2010 MØsefund was producing something very different, according to Andersen: “Better tasting, the better-for-you red meat.” The Mangalitsa has the highest concentration of monounsaturated fat of any domesticated animal, which led Auburn University to conduct studies on the Mangalitsa, looking for keys to defeating diabetes and heart disease in humans. This too is a serious part of the equation for Andersen, a humanly beneficial piece in the entire puzzle of his quest.

But the economics are still problematic, and the entire history of American agriculture comes to play. Andersen needs to sell the whole pig, in spite of the good prices for his collars, chops and bacon he gets from Manhattan restaurants, to make sound economic sense of the process. Ham, the starting point of this quest, is the hang-up. “It takes four years to build a Mangalitsa ham,” he says, “and the big issue in the end is one for all artisanal farmers. You need to slaughter the pig in the right way.” But the right way is not readily available due to the large, consolidated slaughterhouses and their needy corporate clients.

The Mangalitsa needs to be scalded, its long hair taken off, not skinned like factory pork. With less than 2,000 animals and maybe 15 at a time ready for slaughter, the only slaughterhouse he has found where it can be properly killed, cut and cured is in Missouri – a hike from the New Jersey farm. To date, the economics do not balance.

Andersen carries on his cell phone a photograph of a MØsefund Mangalitsa chop. He is erudite about the history, the facts of pig farming, proud of it and not without a sense of humor about a Wall Street guy, not a farmer, coming into the country. He has formed the Mangalitsa Breeders Association and sits as its first chairman. When I ask about the irony of starting down the labyrinthian path to jamÁ³n and then not being able to get a ham out of the deal I also state the obvious – that he must have had at least one ham from 3.0. “I have had a ham or two made for myself,” he replies.