Now You Can Make Your Own Organic Make-Up

When you consider the lengths people will go to monitor what goes into their body--organic food, sugar-free drink, the list goes on and on--it's surprising how little awareness there is of what they're putting onto it. 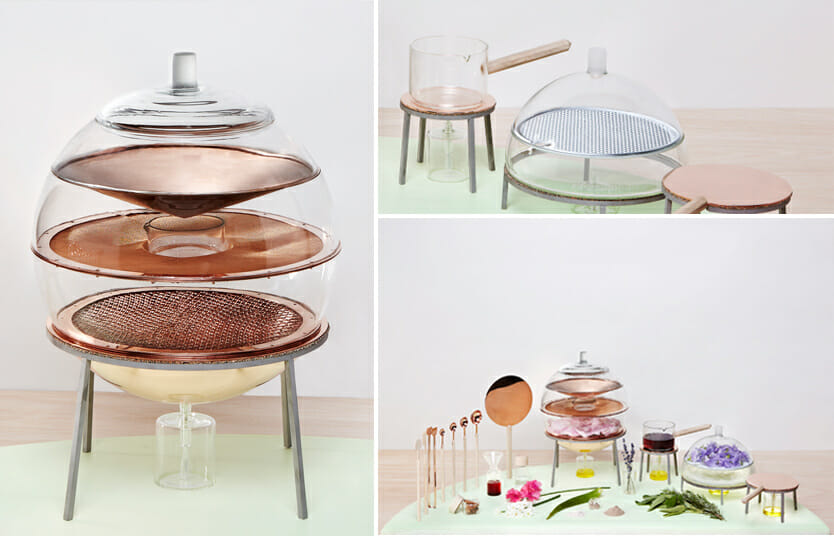 The makeup of make-up is a total mystery to most who apply it every single day. Lauren Davies believes that turning primping into something more thoroughly engaging can not only enhance the experience itself, but also ensure that what we put on our skin is, well–good for us. What if the act of making make-up became akin to cooking a hearty, healthful, and delicious meal?

Cosmetics can be tricky because they are, fundamentally, superficial, and often fraught with gendered baggage and societal expectations. “It’s become part of a process, and at times a bit laborious — perhaps more so as we grow older because it becomes an expectation rather than a pleasure, to some degree,” the London-based designer says. “I believe that by being involved in the fabrication it is possible to reconnect with the excitement of discovery that you feel as a child playing with make-up, as well as feeling like you are pampering yourself rather than conforming to a prescribed ritual.”

Davies created The Alchemist’s Dressing Table as her final project at the Royal College of Art; the series unites material, ritual, and form into a cohesive collection of beauty tools, where the user is also the maker. It’s a bit like a grown up chemistry set for the aesthetically aware, where distilling your own essential oils and burning your own kohl eyeliner could be part of your daily routine.

She cast an incredibly wide net for her research: Egyptian, Indian, and Elizabethan history, various perfumeries, make-up artist pals, books like Mandy Aftel’s Essence and Alchemy and Terrence McLaughlin’s The Gilded Lily, as well as a variety of modern brands. And while companies like Dr. Hauschka, Korres, and Pai have made efforts to increase their ethically responsible transparency, but there’s still a long way to go to reveal what fills up the majority of slick, brightly colored plastic packaging found in the department store.

A shift in how we approach the familiar products could usher in a key step towards increasing awareness and deepening the meaning of the daily interaction. As of now, The Alchemist’s Dressing Table is more of a conceptual statement meant to spark a discussion surrounding the topic, and potentially–ideally–be developed into a series suited for easy, at-home use to achieve truly natural beauty.

We talked to Davies about how makeshift rosewater, borosilicate glass, and distilled witch hazel came together to inform her endeavor.

Modern Farmer: Lots of little gals start playing with make-up before they’re actually allowed to wear it. What do you recall about your earliest experiences?

Lauren Davies: I remember my first Tinkerbell make-up set, when I was about five or six years old. Mum was trying to discourage my sister and me from having any at such a young age but much to our delight, our aunty gave us a set one Christmas — I couldn’t sleep, I was so excited about it.

I was also always out in the garden mixing leaves and mud and flowers, trying to make rose perfume by stuffing petals into a bottle of water and leaving it for days; then I would become truly disappointed by the brown rotten liquid it became.

MF: What was the process like designing the objects themselves? Did you have a certain aesthetic in mind, and was it tough to reconcile that with the functional properties of the materials themselves?

LD: Before I came to the RCA, I was a set-designer and prop-maker — I didn’t often work with precious materials and don’t have a background in product design, so I was very keen to work towards something that has a longer life cycle and is considered precious, as I often felt frustrated with the wasteful nature of the world I was working in before. I was, however, able to capitalize on my styling skills and my personal aesthetic in terms of color and composition to give the pieces their status.

Copper plays an important role, both as a symbolic historical reference to polished copper mirrors and traditional perfume stills, but also for its conductive properties. The cork was used for its insulating qualities so that the stands wouldn’t get hot, and the maple is a hardwood traditionally used for tool handles; it’s good for working and has is a folkloric symbol of creative expression.

And as my whole concept is about transparency, I chose borosilicate glass — it’s symbolic of the whole idea, and also allows the user to see the internal processes that are so often hidden.

MF: It seems like sourcing all the necessary ingredients could be quite a challenge for today’s on-the-go ladies. What do you use, and where do you get it?

LD: I always use base ingredients that are fair-trade and organic: almond or coconut oils, bees wax, shea butter, aloe vera gel, distilled witch hazel, roses, lavender, rosemary. The most exciting thing about embarking on a project like this is that the list is endless; there are so many combinations and ways of changing and refining formulas. And ideally, you would be able to use materials you grew or foraged yourself but I realize that this isn’t always possible, so trying to use local or sustainable ingredients is what I aim to encourage.