What does local mean, anyways? In this installment, the Farmivore looks at an extreme take on the trend. 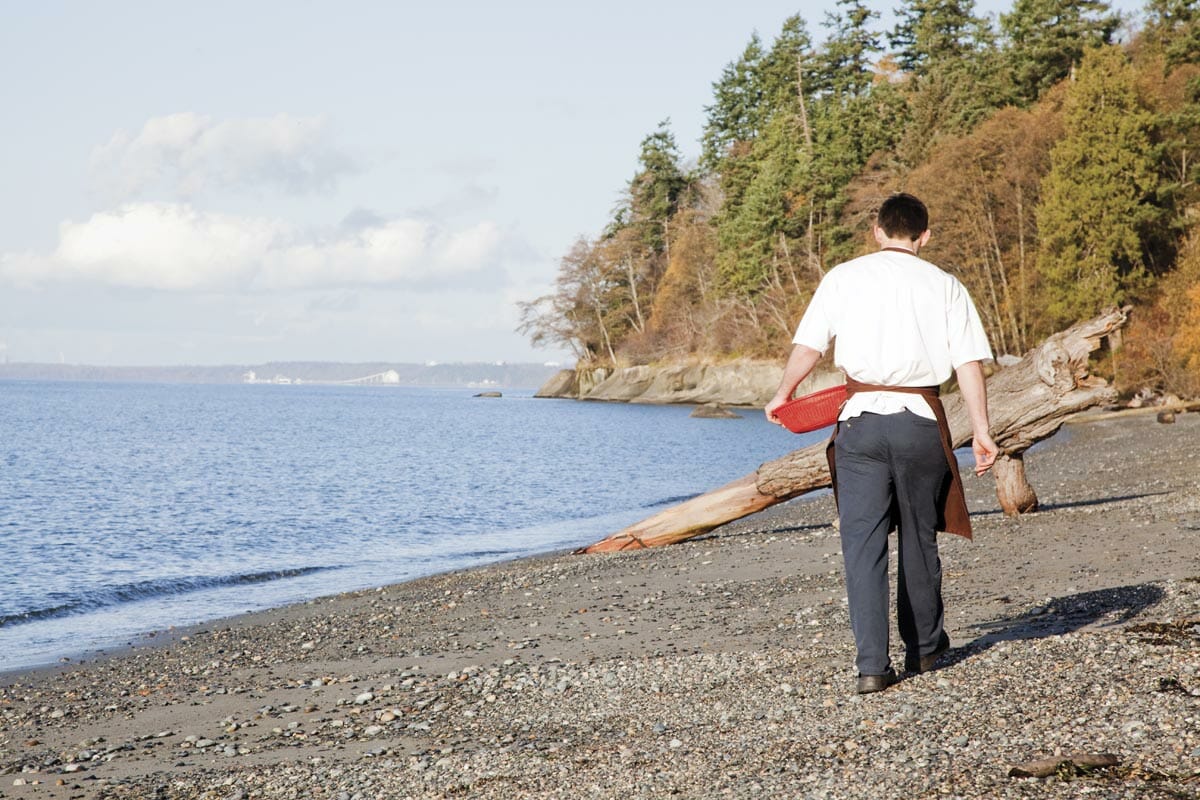 Local. Plenty of menus assert that ingredients are “sourced locally whenever possible,” or some similar formulation, though the meaning of such a claim is murky at best. Is it defined by mileage? By county? By travel time? Where is the border for local food?

For Blaine Wetzel, chef of The Willows Inn, the boundaries couldn’t be any clearer. He only serves food from Lummi Island, a small but fertile bit of land off the coast of Washington state, where his restaurant was founded in 1910. If an ingredient isn’t available within the island’s nine and a quarter square miles or its surrounding waters, then it isn’t served at all.

That means no chocolate and no black pepper. Sugar is derived from beets grown on the island, and salt is made from seawater. Wetzel may have squeezed lemons occasionally when he took over as chef in 2010, but he has since discovered a local source of acidity in a nearby vineyard’s under-ripe grapes. This was a moment of revelation for the chef.

“I’ll be able to find any kind of flavor I need around here, and if I can’t, it’s not one that’s meant for use,” he says. Diners are not told that they’re eating tart local grapes in lieu of lemons, but Wetzel believes that it makes a difference in the flavor. “What you’re going for in a restaurant is to have things that taste great and unique,” he explains. “And a part of that is sourcing.”

In the end, every chef knows that food is only as good as it tastes, and Wetzel’s Lummi Island fare has proven to be quite good indeed. Soon after he took over as chef at the age of 24, The New York Times called The Willows Inn one of “10 Restaurants Worth a Plane Ride” and this year, Food and Wine named him a “Best New Chef.” Wetzel’s previous gig as chef-de-partie at Noma, the Danish restaurant renowned for its creative commitment to capturing “time and place” in Nordic cuisine, has deeply informed his culinary philosophy.

“People who eat here should have a quintessential Northwest experience, ” he says. “What I try to do is have each dish reflect the moment in time, in nature, here. So that each dish really reflects what’s going on right now.” 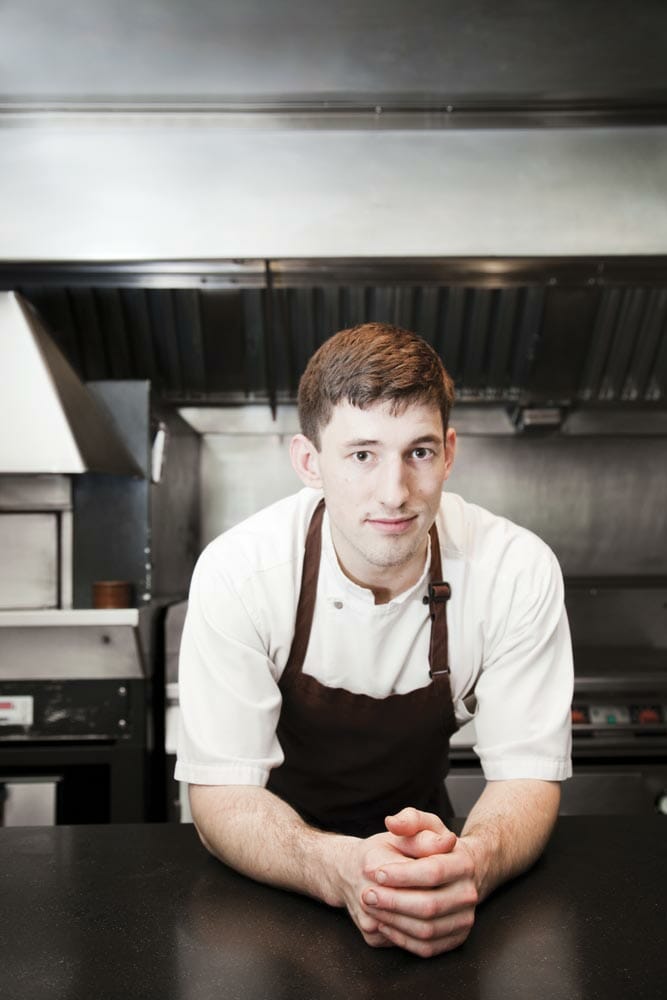 Chef Wetzel, who has been racking up accolades for his extreme local cuisine

The water surrounding Lummi Island has proved fertile ground for experimentation. The Willows Inn is one of only two restaurants on the island, and it has longstanding relationships with local farmers and fishermen, as well as seawater rights, which allow the restaurant to pump seawater directly into a state-of-the-art kitchen situated just a hundred yards from shore. (Seawater has become a trendy ingredient at some of the most expensive restaurants in the country, with chefs like Michael Mina shipping it to Las Vegas, but it is practically unheard of to have unlimited access like The Willows Inn.)

Using seawater means that Wetzel can literally steep his ingredients in the flavor of Lummi Island: blanching vegetables, building sauces and brines, even harvesting salt from local seawater. During the summer, the kitchen’s large seawater aquarium holds Dungeness crab and spot prawns in an environment with the same nutrients and nitrogen levels as in the wild, meaning that the seafood is always served as if it were just caught, even though fishing regulations limit the days when shellfish can be harvested. Wetzel keeps track of the “openings” when spot prawns are available, and asks the fishermen to save him a couple hundred of the delicately sweet crustaceans.

“Restaurants don’t always understand the situation,” the chef explains. “A fish purveyor’s job is to try to have everything available all the time, but there’s only an opening two days every few weeks. It’s fun to not have that disconnect, because it’s very sporadic.” For a recent summer dish, the cooks poached Dungeness crabs in seawater to flavor the meat through the shell, then built a sauce by poaching the shells in seawater and finishing it with brown butter. In Wetzel’s view, “It’s nice to have seawater as a part of the recipe because it adds a brininess and marine flavor that you can’t match.”

The local waters also offer access to world-class sockeye salmon, which run past Lummi Island on their way toward the Fraser River in Canada. Local fishermen use a Native technique, traditionally used by the Lummi tribe, called reef-net fishing, which yields a particularly high-quality product. When a school of salmon swims by, the fishermen raise their nets and deposit the salmon into a seawater holding tank, where they discard other species of fish and give the salmon a chance to rest, which reduces lactic acid in their systems. Then the salmon are individually bled out underwater so that they cleanse their own circulatory systems with seawater, before each one is packed by hand.

‘What I try to do is have each dish reflect the moment in time, in nature, here. So that each dish really reflects what’s going on right now.’

On one day per year, during the summer, thousands of salmon are delivered to the restaurant, where thirty cooks doggedly work to remove the pin-bones from the flesh; by the end of the day, all of the salmon is in the blast freezer. And everyday throughout the rest of the year, the salmon – caught on that one day, from that one school, in that one net – is moved in small batches to the smoker at The Willows Inn, where it becomes the oleaginous epitome of smoked salmon. Wetzel serves it as a stand-alone dish, just a slice sitting eloquently on a small wooden platter, to be eaten by hand, just as it was caught.

About a third of the menu is foraged, while the rest is grown at the restaurant’s farm or bought from local purveyors. Each cook must forage for the ingredients on his or her own station, following a system that Wetzel learned at Noma, which also taught him the gastronomic value of foraged plants like beach grass. And Wetzel works with gardener Mary von Krusenstiern at Loganita Farm to grow obscure items like camas bulb, as well as herbs that have little commercial market in the area, like sweet woodruff and sheep sorrel. Over the past three years, Wetzel has grown more confident in working with the farm and his purveyors, as he learned that “the most important thing is the sourcing of the ingredients and the integrity of the restaurant.”

Here is an inspiring commitment to a culinary philosophy, though it may be hard to imagine such clarity of vision being emulated in more pedestrian locations, given that “local” often remains open to divergent interpretations, in the absence of the kind of indisputable boundaries offered by an island. The trendiness of hyper-local cooking also raises questions about its rewards: a San Francisco magazine article labeled this movement “DIAY” – “do it all yourself” – and made a strong case for outsourcing certain ingredients if others can do it better.

But The Willows Inn offers an intriguing case study in extreme locavorism, and possibly aesthetic inspiration for cooks around the world. After all, Lummi Island is no tropical paradise – the restaurant closes for two months every winter due to lack of sunlight–but as Henry James once wrote, the artist must believe in the “rightly conceived tight place” that sparks, by its constraint, the greatest creativity. And in a “tight place” like Lummi Island, locavorism has risen to the level of fine art.