In the Wake of Indonesia’s Fires, Criticism of the Palm Oil Industry Smolders

When we last checked in on the palm oil industry, it was busy planning to expand its operations to Africa’s Congo Basin. Environmentalists worried that the industry’s destructive farming practices would lead to imminent slash-and-burning of the Congo’s rainforests for palm tree plantations. Now this week, the industry’s self-regulatory organization, the Roundtable on Sustainable Palm […] 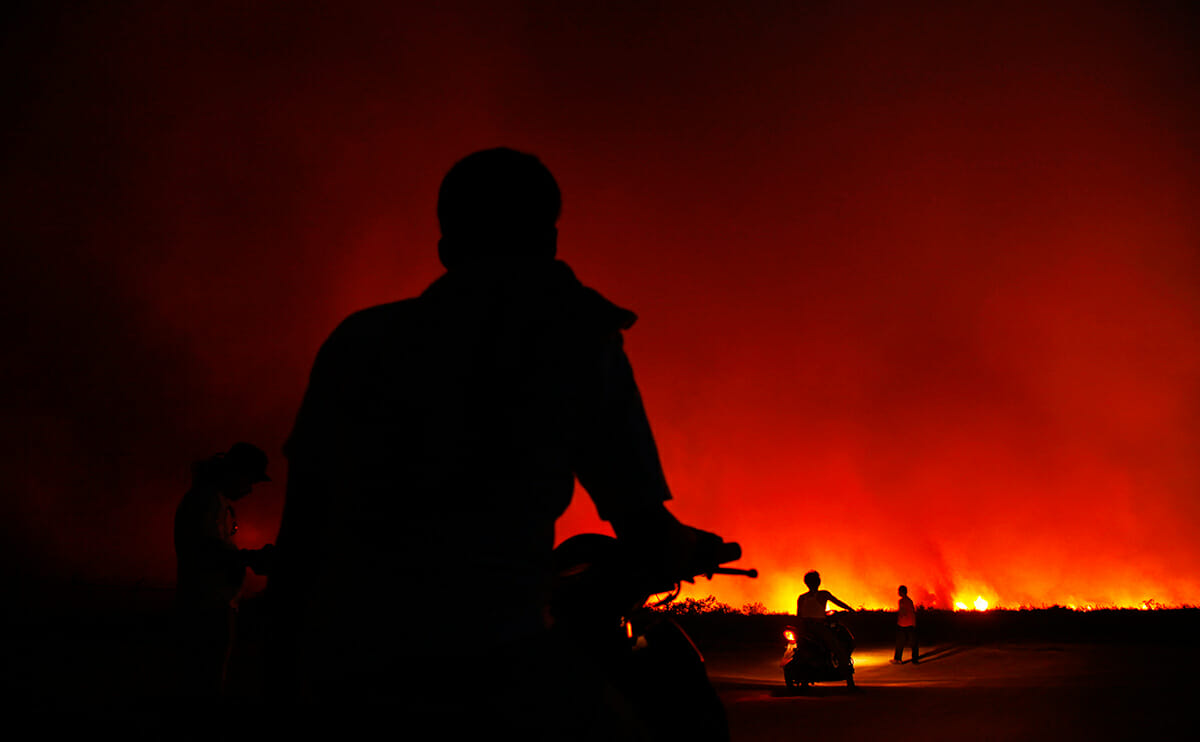 When we last checked in on the palm oil industry, it was busy planning to expand its operations to Africa’s Congo Basin. Environmentalists worried that the industry’s destructive farming practices would lead to imminent slash-and-burning of the Congo’s rainforests for palm tree plantations.

Now this week, the industry’s self-regulatory organization, the Roundtable on Sustainable Palm Oil (RSPO), is being criticized for not being quite self-regulatory enough. According to the Guardian, environmentalists are charging that the RSPO failed to sufficiently investigate the involvement of some of its members in the wildfires that swept through Indonesia last month.

In the wake of the fires, the media reported that numerous hot spots were located on plantations owned by five RSPO members. At end of June, RSPO, a membership-based organization that counts palm oil growers and manufacturers, retailers, investors, and environmental NGOs among its ranks, responded by requesting that the five companies in question submit digital maps to compare their concession boundaries with satellite imagery taken of the blaze.

The RSPO announced four days later that three of the growers had complied, while “delays in communication” had prevented the other two companies, PT Jatim Jaya Perkasa and Tabung Haji Plantations, from following suit. The organization gave those companies 48 additional hours to comply, after which the organization said it would commence formal complaint proceedings.

Eleven days after that, the RSPO announced that only Tabung Haji Plantations had provided maps, and that it would commence a formal complaint proceeding against Jatim Jaya Perkasa. Two days later, on July 11, the RSPO said it had analyzed all of the maps the companies provided and cleared them of any violations, and that Jatim Jaya Perkasa had finally submitted maps, but they were unusable. Meanwhile, Greenpeace reported that it had information showing some 100 hot spots on Jatim Jaya Perkasa’s land.

Critics are demanding to know why it took so long for the RSPO to get maps from its own members, asking how effective the organization can really be if it can’t even demand transparency.

In an interview, Bustar Maitar, the head of Greenpeace’s Indonesia forest campaign, questioned “why the RSPO needs to wait for over two weeks for companies to hand in concession maps, when it is part of the RSPO principles and criteria for members to be transparent about their concession maps.” He added that it was “time for individual palm oil companies to step up and set the bar higher than the RSPO.” Greenpeace is currently campaigning for an “immediate moratorium” on forest and peatland destruction in Indonesia, which is says is the world’s third-largest emitter of greenhouse gases; the group is calling for zero deforestation by 2015.

For its part, the RSPO has issued a release on its website stating in part that “The recent fires in Indonesia also represent an opportunity for RSPO and its members to play a positive role to help other companies and governments mitigate, or avoid altogether, the annual fires and haze in South East Asia…The RSPO firmly encourages its members with existing plantations on peat and elsewhere to adopt fire prevention measures within their concessions. For further guidance, kindly refer to RSPO’s Peat Best Management Practices (BMP).”