A Hill of Beans

When Mary Ann Fox passed away this winter, she left behind quite a legacy - thousands and thousands of heirloom beans. 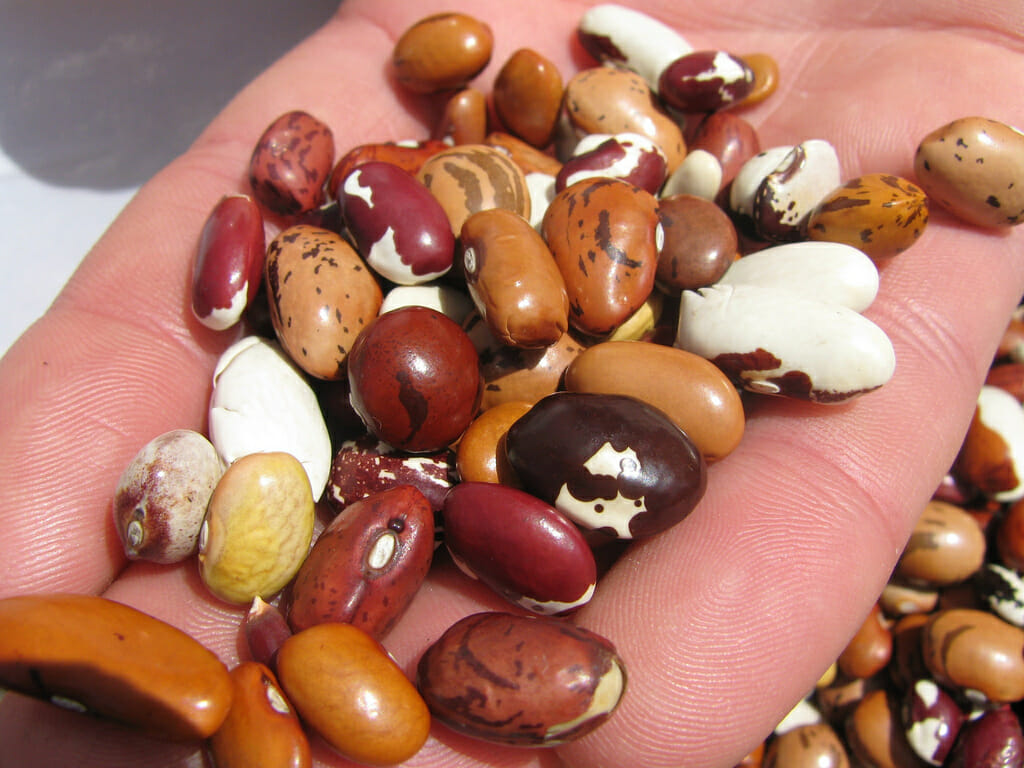 Kelly had driven out to Fox’s home in Blue Ridge, Indiana, looking to buy some beefsteak tomato plants. He was told she had hundreds of tomato varieties; if anyone would have beefsteaks, it’s Fox. “But when I said what I wanted, she abruptly replied she didn’t carry those,” Kelly says. “Then she proceeded to tell me beefsteak tomatoes – my favorite tomatoes – didn’t have enough flavor. I thought ‘Nope, I really don’t like this woman.'”

Little did Kelly realize: this moment would mark the start of a long, warm, occasionally prickly friendship. And when Fox passed away this winter, Kelly would drive 500 miles in a rented conversion van, bringing her massive bean collection to a seed exchange in Iowa.

“Mary Ann didn’t trust most people with her beans. She thought they’d ruin her collection, mix everything up. But Jim, she trusted.”

Fox spent half her life as an heirloom bean collector, amassing a truly impressive private collection. Every room of her house brimmed with neatly annotated, bean-filled Pepsi bottles. Aaron Burmeister, collection inventory technician at the Seed Savers Exchange, said Fox had well over 200 varieties of beans. “For a private individual, that is really incredible,” he said.

After she died in February, Fox’s sister, Susie Rhoades, started sorting through her house. There were enough beans to fill up “a truck and a trailer”; Rhoades was overwhelmed. “My sister dove into everything she did with both feet, there’s no two ways about it,” she said.

Kelly never developed Fox’s bean mania; he preferred heirloom tomatoes. But after his friend died, Kelly was the person Rhoades asked for help. “Mary Ann didn’t trust most people with her beans,” Rhoades said. “She thought they’d ruin her collection, mix everything up. But Jim, she trusted.”

Kelly quickly grew overwhelmed himself. He tried taking out ads, selling the beans on Facebook, giving them away to friends – it barely made a dent in the massive collection. Finally, he had an idea: he’d pack up the beans and bring them to the Seed Savers Exchange in Iowa, where Fox had been a member for nearly two decades.

Seed Savers is one of the oldest and largest seed exchange groups in the U.S., with 38 years and tens of thousands of seed varieties to its name. But even an organization of that scope was bowled over by so many beans. “No one is really set up to process inventory of that size,” Burmeister said.

It was a tricky situation – the exchange already possessed most of the bean varieties in Fox’s collection, but they wanted to honor her legacy. Finally, they devised a sweet solution. At their annual rally this month, Seed Savers Exchange will give Fox’s entire collection to its members, free of charge.

“There seems to be two groups of seed collectors,” said Burmeister. “As original members of the organization retire and pass on, newer, younger members are taking their place. This younger set is part of a growing enthusiasm for home gardening and seed saving, and many may not be aware of the work done by seed savers 20 and 30 years ago. We’re trying to bridge the gap between these two groups and gather a multigenerational community of seed savers.” Burmeister sees Fox’s collection as a potential bridge. At the rally, Seed Savers members will get to learn about Fox’s life, and what the beans meant to her.

No One Mixes Up My Beans

Her collection wasn’t always so big. It started many decades ago, as the unlikely offshoot of another passion: Appaloosa horses. Fox saw patterns between the spots on her horses and the intricately patterned heirloom beans. There’s even a black-and-white mottled bean called the Appaloosa.

Though naturally, her love for beans wasn’t only about patterns. “We were a ham and beans family, all growing up,” said Rhoades. “Mary Ann loved eating beans her entire life.”

But what made Kelly change his mind about Fox, 25 years ago? Before he left her house that first day, she gave him four Black from Tula heirloom tomato plants, free of charge. Fox knew what she was doing: once Kelly tried these smoky-tasting purple-black beauties, he never ate another beefsteak.

Funnily, Kelly said Fox was never passionate about tomatoes – they were a ruse, a way to entice customers onto her property. “Once she got you out there, she’d try to sell you some beans,” he remembered with a chuckle.