Foraging for Scents at Juniper Ridge

At Juniper Ridge, it's all about foraging deep in the woods for scents that'll transport you into the wilderness. 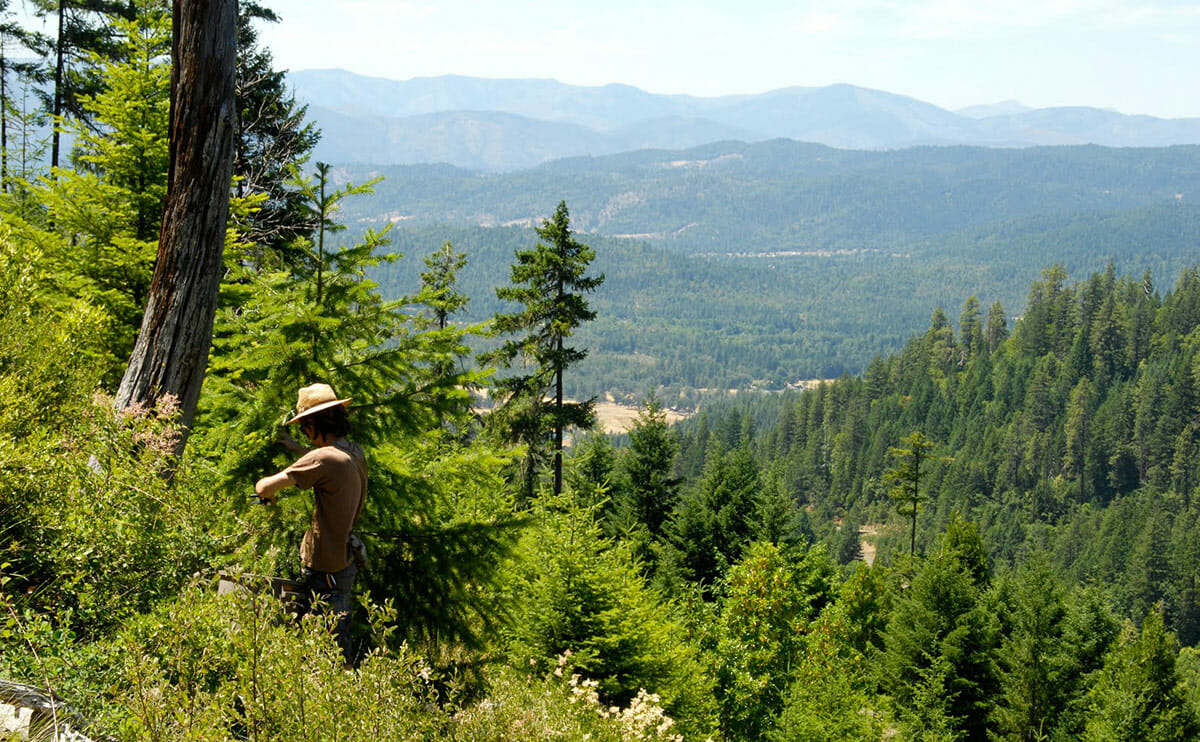 If you’ve ever wanted to experience hiking in California’s Sierra Nevada foothills, you could book a plane ticket and lay down some cash at your nearest REI. Or, you could grab the Yuba River Cabin Spray from Bay Area wildcrafting fragrance company Juniper Ridge, a company that has carved out its own niche as a purveyor of all-foraged scents meant to evoke very specific bits of wilderness. Juniper Ridge doesn’t just want to fill your space with the smell of “the outdoors,” they want to transport the specific sensation of, say, meandering through Big Sur or being deep in the Cascades — via scent.

Juniper Ridge started back in 1998, when 30-year-old founder Hall Newbegin (his real name, despite sounding like a New Age-y moniker) was shilling fragrance-filled products at the Berkeley Farmers Market. He sold out of his stock of bar soap and wild herb teas that first day, came home $500 richer, and knew that something big was in the works. Originally from Portland, Oregon, Newbegin was a new transplant to the Bay Area who spent all of his free time outdoors all along the West Coast – both the lesser-known trails and the marquee spots – getting to know the plants and foraging for wild mushrooms.

“Plants took me by the collar and just shook me,” he says. He’d spent time studying to become an herbalist but he wasn’t really sure what to make of it all professionally. “It’s what I did in my twenties and I thought I was going to be a hobo,” he says, “or maybe work on an organic farm.” Wildcrafting non-medicinal products (where the priority was evocative, scene-setting smell) was how Newbegin stumbled into a career.

Gathering the raw materials for Juniper Ridge goods is no easy feat, nor it is a twee one. Everything is wildcrafted, but it’s not as quietly bucolic as it might sound. “I would hate to have the image that this is like ‘The Sound of Music,’ and we’re out there with baskets, picking wildflowers kinda thing,” he says. Making fragrance from completely natural material requires a lot of said material, meaning the Juniper Ridge spends lots of long hours with chainsaws and big shipping trucks. “It takes a lot of that stuff,” says Newbegin.

The foraging is less of a gimmick and more of a necessity. “We don’t do our own harvesting just to be special and precious,” says Newbegin. “You can’t get the ingredients that we work with unless you’re out there with your hand clippers and a harvesting truck and a permit from the Forest Service.”

Knowing that they’ll need to return over and over to forage more materials for their fragrances, Juniper Ridge treats their foraging spots like wild gardens, often working with state parks to utilize plant material that was going to be destroyed anyway. They’ve never used farmed ingredients in their products and that’s not likely to change any time soon: “This is all an ode to wilderness itself and the things that come from the wild,” says Newbegin.

Juniper Ridge’s claim of being the only company still doing 100 percent natural fragrance is a lofty one. Sandy Blandin, fragrance expert and founder of Nose Who Knows, a company specializing in olfactory training and fragrance strategy, says that many scent companies are trying to claim the all-natural route. What sets Juniper Ridge apart is the complete control over their supply chain, says Blandin.

According to Newbegin at Juniper Ridge, “what passes for fragrance these days is a cheap, cheap petrochemical-based version of its former self.” It’s a claim that Blandin doesn’t quite buy. “[The industry hasn’t] really abandoned the natural ingredients,” says Blandin. “It’s just that they are now compounding and creating differently than what they used to do in the past. It doesn’t mean it’s bad or good – it’s just different.”

Blandin thinks that what Juniper Ridge does is “an interesting concept” but warns against fast-tracking the company into sainthood. For her, transparency between producer and consumer is key. After all, even natural ingredients can cause problems for some with specific allergies. The most important part for consumers is knowing what’s in the fragrance and knowing how your body will react to those ingredients.

But for Juniper Ridge and Newbegin, it’s not just about an all-natural product, it’s about bottling nature — and the effect that has on a customer. Ultimately, the company’s goal is much bigger than staying true to the smell of the plants and the traditions of perfumery. “We’re delivering your evolutionary past to you,” says Newbegin.