Two years ago, a British ex-pat started a modest farmer's market in Dubai, under the shadow of the world's tallest building. With just three vendors, it was virtually the only place to buy local produce in the entire city. 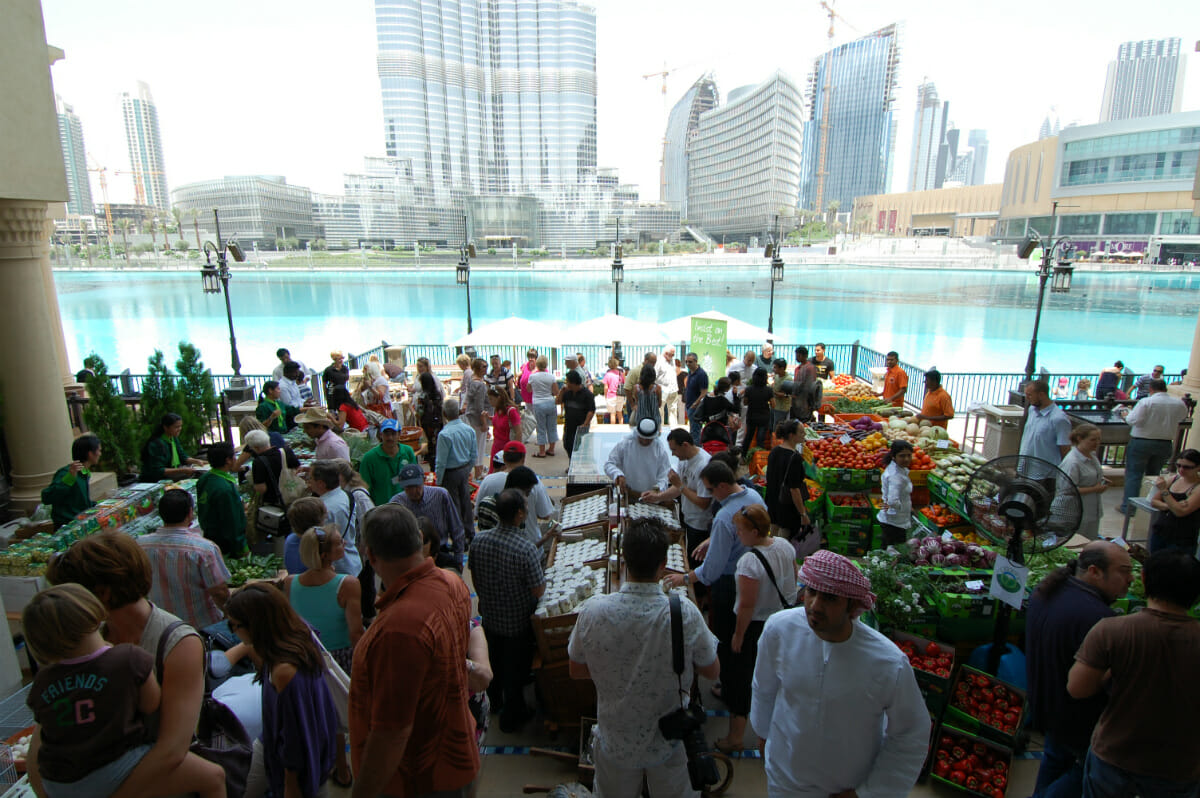 Several years ago, a British ex-pat named Yael Mejia set out to fill this void. She started a modest farmers market, under the shadow of the world’s tallest building. With just three vendors, Dubai shoppers got their very first source for local produce.

Mejia had emigrated from London to Dubai, in order to expand her small chain of artisan food shops. These shops, called Baker and Spice,* had followed strict local sourcing principles since 1995. Mejia wanted to continue this ethos in Dubai, but soon found it to be a monumental challenge.

She started touring the Middle East, making farmer connections in Iran, Syria, Lebanon and Saudi Arabia. By necessity, her definition of local was stretched a bit thin. Mejia knew there were organic farmers right next door in Abu Dhabi, but buying from them was “bloody hard.”

“You could get crap produce from all over the world, sold in crap supermarkets just like everywhere else. What about the local farms?”

As it turned out, these farms were the exclusive provenance of uber-wealthy patrons and their friends. Most shoppers could only buy wholesale produce, imported from thousands of miles away.

“You could get crap produce from all over the world, sold in crap supermarkets just like everywhere else,” says Mejia. “What about the local farms?”

With a boatload of persistence, Mejia finally cracked the code. After two years of fruitless attempts, she connected with an Abu Dhabi farm that grew organic tomatoes, eggplants, zucchinis, peppers, lettuces and herbs. This led to the addition of two other local farms; she now had enough vendors for a market.

Local media gave the first farmers market a lot of hype, enamored with the novelty – organic produce in a sea of artifice. It was held on a terrace outside Baker and Spice’s cafe, a stone’s throw from the world’s tallest building, the Burj Khalifa. In the background was the Dubai Fountain, a garish attraction modeled after the Bellagio Fountains in Vegas.

A whopping 4000 people attended the first market. “People were unbelievably grateful,” Mejia says. “Local produce just was not available to the common man.” The crowd was – and continues to be – a solid mix of ex-pats and Dubai locals. But one group markedly not in attendance? Chefs.

Many of Dubai’s most prestigious chefs work at big, luxe hotels. They typically source their produce from wholesalers, where aesthetics and uniformity are valued over taste. Farm-to-table mania apparently hasn’t reached Dubai’s restaurant sector. “Chefs here are spoiled brats,” Mejia says. “They want all their veggies to have the exact same size and look.”

Mejia doesn’t understand why anyone would prefer imported produce, especially when it costs significantly more. Transporting food to the middle of the desert requires significant infrastructure costs, which are passed on to the consumer. Comparatively, the farmers market is dirt cheap. “During the six months we’re open, you’d be a fool not to shop here,” says Mejia.

The market just finished its third season in May, running from late fall to mid-Spring. After that, the desert climate is far too hot to grow; temps sometimes creep above 120 degrees. Even during the “cold months,” farming in Abu Dhabi is tough. Mejia said the farmers have to use drip irrigation and brackish water, similar to Israel.

Possibly due to its growth — there are now eight vendors — the market was forced to relocate this year. Baker and Spice’s landlord put the kibosh on events outside the shop; they’ve moved to a garden at the Emirates Towers hotel. For updates on the next market, follow Baker and Spice on Facebook.

*no connection to Baker and Spice in Shanghai or Portland.