Dear Modern Farmer: What In the Name of God Is Happening to My Apples? - Modern Farmer
Animals, How-To, Plants

Dear Modern Farmer: What In the Name of God Is Happening to My Apples?

Dear Modern Farmer, I've started to notice these little spots on the side of my apples, and a crumbling red-brown gooey substance coming out of them. What's the deal? 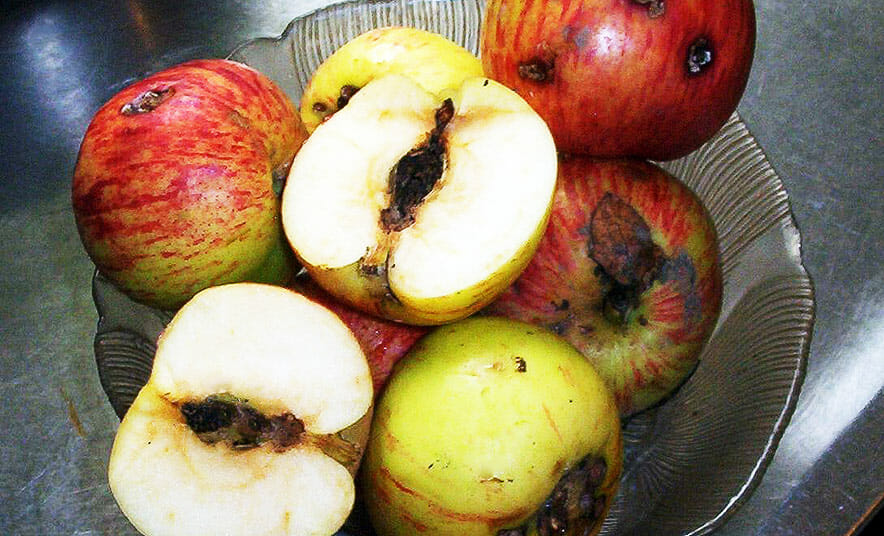 I have an apple orchard and we’ve got tons of great fruit coming in this year. But I’ve started to notice these little spots on the side of my apples, and a crumbling red-brown gooey substance coming out of them. And when I cut them open, it’s the stuff of nightmares. What’s the deal?

Anxious About Apples in Yakima 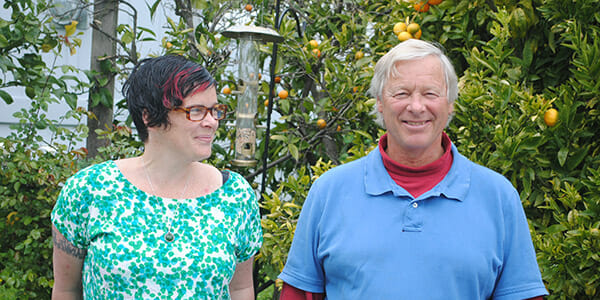 Orin K. Martin: Sorry, kid, they’re not worms. What you have is an infestation of the most common of all apple pests: the codling moth. The larvae are worm-like but they’ll grow up to be adult moths. Same terminal effect on your fruit, though.

When you see a little red bulls-eye (or “sting”) on the side of the apple, that’s where a moth tried and died, meaning it didn’t get in. Or you see a similar red circle with gooey stuff coming out of it. That’s insect frass, which is a polite word for “shit.” That means the worm has been in there, done its thing, and left.

MM: What’s the “thing” that it does? Please don’t say something grosser than “shit.”

OKM: It matures. Is that considered gross? Basically, a female moth lays an egg (or up to a hundred eggs) on leaves or young fruit, and the egg hatches into a larvae and tunnels into the apple core. They chillax and hang there for a few weeks. It’s a perfect environment ”“ they have a nice little cavity, there’s an abundant food source (the apple), they’re protected from predators, it’s dark in there. After about three weeks they tunnel their way out and move off the tree and eventually will be adults in the next generation of codling moths.

You’ll see a red circle with gooey stuff coming out of it. That’s insect frass, which is a polite word for ‘shit.’ That means the worm has been in there, done its thing, and left.

MM: And continue to have babies that munch all your apples like little jerks.

OKM: Yeah, you can have multiple generations of these moths a year. They are cold-blooded critters, literally and figuratively. Temperature drives them — if it’s warm and humid, you have more moths in a generation, the moths are bigger and badder, there are more generations in a summer… and more damage. The damage can be up to 100 percent if left untreated.

MM: And, geniuses that we are, here in North America we’ve imported apples (which are originally from the Kazakstan region) and codling moths along with them, but whoops, we forgot to import any natural predators. So now it’s our job to kill these little jerks. How?

OKM: Conventional growers sometimes use potent pesticides called organophosphates, which are highly efficient at killing all of the target pests. However, not only do the pesticides kill the moths, they kill all the insects, including butterflies, honey bees and other beneficials.

MM: Organophosphates are also notoriously bad for humans, right? I mean, aren’t they classified as nerve agents — which means they’re structurally related to fun things like napalm and sarin gas?

OKM: Oh, yeah. Exposure to organophosphates has been associated with increased ADHD, early Alzheimer’s, and, well, death. Which is good for little bugs; not so good for little kids. This isn’t some conspiracy theory; this has been widely shown in university and even government studies. So it’s not just us old hippies who want to use a biological approach to pest control. More and more conventional growers are going bio, too.

MM: Okay, let me rephrase my question: how do we kill codling moths without killing everything else in our gardens and/or ourselves?

OKM: Like with most organic approaches, there are a bunch of modalities. Prevention matters. Clean up. Don’t let fallen apples lie on the floor, and don’t compost them. Once your apples get to be ping-pong ball sized, patrol the orchard every 7-10 days and remove the stung apples. This, of course, is somewhat time consumptive, but it’s the same principle as with hand-weeding: you’ll be more in touch with your orchard. Like Marvin Gaye, you’ll see what’s going on…

MM: And hopefully what’s going on is not as depressing as what Marvin Gaye was seeing. Look, it’s nice to be preventative and all, but once you have codling moths, how do you kill ’em?

OKM: There is an organic spray that delivers a virus that basically gives the moths a tummy-ache until they die. It doesn’t harm any other organism, including us. The bad news? It’s insanely pricey. More than $100 a pint. And its timing is really specific, probably beyond the home gardener’s capability.

In terms of natural predators, there’s a species of tiny non-stinging wasps, Trichogramma wasps, that are a natural predator species. While they’re native to the Western U.S., they’re not always common in gardens and farms, but you can buy them and release them and let them do their thing, if you’ve fostered an environment that promotes beneficial insects. Which you should be doing anyway.

However, by far the most effective and coolest way to control codling moths is to use pheromones. Basically, without getting too much into the specifics of the moth sex cycle —

OKM: — scientists have been able to organically synthesize the sex pheromone of the female codling moth. You hang a pheromone dispenser in your tree and the male starts flying to find the female, but instead of directing him to the female, the manufactured pheromone blankets the whole tree. So the male doesn’t know which direction to go in, and he gets confused and literally flies around in circles until he either dies of exhaustion, or gives up. This approach was originally called “male confusion,” but I guess the ag guys (who, yes, are mostly guys) got a little insecure or threatened by that term so they renamed it “mating disruption.”

MM: I feel like there is perhaps some sort of great dating metaphor to be found in the phrase ‘male confusion’ and how it leads to death … but I can’t quite put my finger on it?

OKM: Well, I’ll let you ponder that, but I can tell you that when it comes to moths, male confusion is awesome! It’s up to 100% effective. Before the late 1980s the conventional wisdom was that it was impossible to grow apples on a large scale organically because of the codling moth, and now there’s a huge industry because of this approach. It’s so effective and cheap that even conventional growers are using it.

I should say that pheromone dispensers are only for use on blocks of fruit trees, five acres or bigger. If you have less than that you can use sticky wing traps, which contain the female pheromone, so the males fly into the trap and die. The traps also contain extract of apple essence, which leads the females to their deaths, as well.

OKM: You want one or two traps in a semi-dwarf tree (under 10 feet). For big trees of 20-30 feet, try two to four traps in one tree. Set the traps high in the tree right as the trees are coming out of dormancy, certainly once the flower petals fall.

MM: And in terms of eating “wormy” apples … Should one eat the unaffected parts of the apple? I mean, if one can get past thinking about how it’s super gross to eat larvae poop-adjacent apple flesh?

OKM: There are some alpha toxins in the larvae frass that if consumed in large amounts are probably not very good for you. You could eat it, but you might not want to. You might get a tummy-ache if you ate a whole bunch.

MM: Which is why I always cut my apples open before I eat them!

OKM: You know what they say — what’s worse than finding a worm in your apple?

OKM: Finding half a worm in your apple.

Want more growing advice? Check out all of Orin and Manjula’s columns here.