In a quest to eliminate gestation crates, researches believe they've cracked the code that may make open pens a widespread reality for swine across the country. 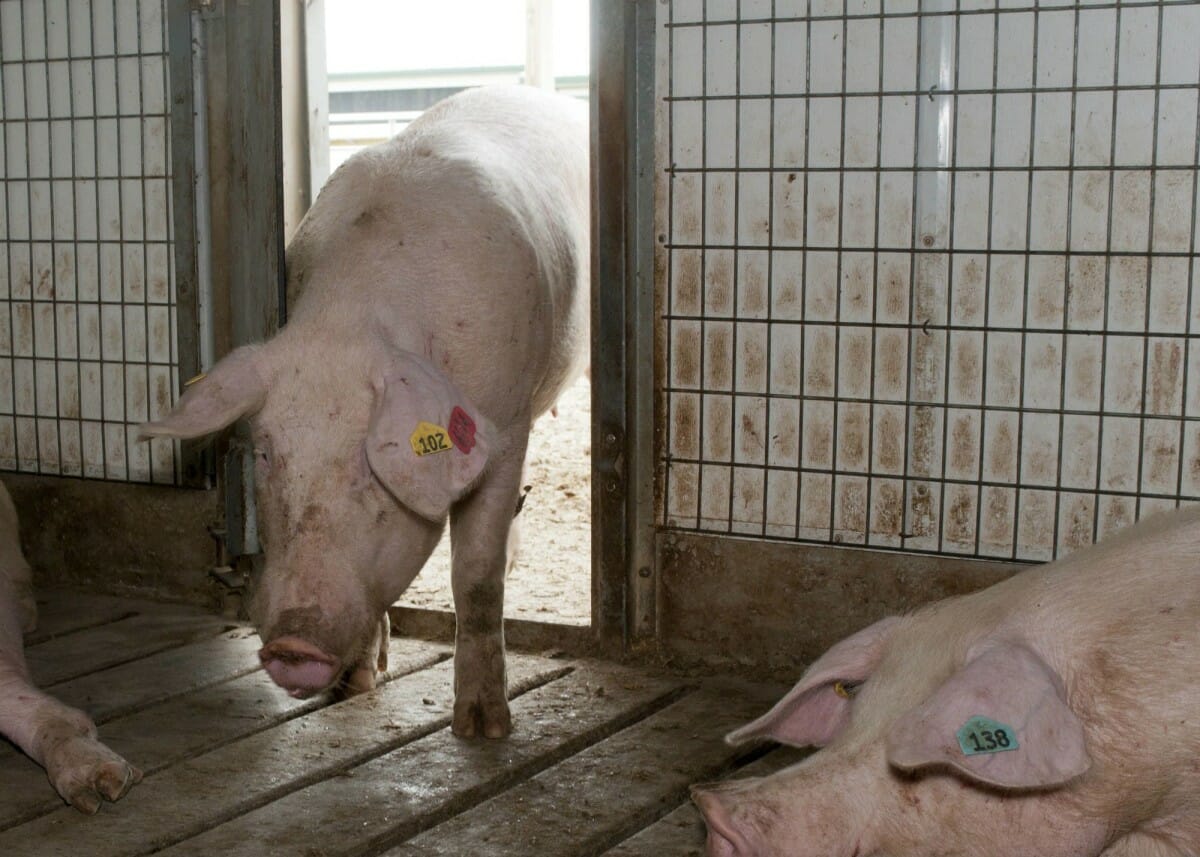 This might make him sound like a romantic, but don’t let his language fool you – his company’s path is firmly rooted in practicality. He’s adopted new technology developed at the University of Pennsylvania that may make open pens a widespread reality for swine across the country. The new feeding system is the result of a collaboration between researchers, animal welfare experts, and a high-tech “seed” bank dedicated to rare breeds. They aren’t just trying to build a better feeding model – they’re trying to build a better pig. And they’re banking on the invention making farmers’ lives easier, too.

Gestation crates or stalls are metal cages about seven feet by two feet wide that became popular about 40 years ago. The crates house breeding sows that are inseminated and give birth to feeder pigs approximately every five months. Those feeder pigs are what consumers eat. The use of such crates, which many believe are inhumane, have been contentiously debated. Recently, hipster-heartthrob Ryan Gosling penned an op-ed in The Globe and Mail decrying the practice.

Dr. Thomas Parsons, who leads the Swine Teaching and Research Center at the University of Pennsylvania, grew up on a pig farm. He’s seen crates used firsthand. Pigs can get testy when feeding, and will bully each other out of meals, so crates were introduced as a way to get food reliably to every pig. But welfare advocates argue that not only are crates cramped, they deprive pigs, who are sociable animals, of much-needed pig quality time. Parsons is no stranger to the argument.

During post-doctoral work in Germany in the mid-90s, Parsons saw a changing attitude toward farming in Europe. “At that point the Europeans were getting much more interested in some of these questions of animal welfare and sow housing, and I think that just sensitized me to some of those issues,” said Parsons. The European Union banned gestation crates, beginning this year.

Thus, the groundwork was laid for Parsons to begin studying open pen models. He started developing what he calls the “Penn” Gestation Housing and Electronic Feeding System in the early 2000s, based on methods he saw in Europe. His research has recently received funding from the American Society for the Prevention of Cruelty to Animals, the Pig Improvement Company (PIC), an organization devoted to genetic improvement in pigs and the animal “seed bank,” the SVF foundation.

Here’s how it works: Parsons’ model has “essentially eliminated the competition for feed,” he said. Each pig has a radio frequency tag attached to her ear and is fed depending on her nutritional needs. A 17-foot-long enclosed station is set up in the barn that allows one pig access at a time. A sow walks in setting off a motion detector that signals the system to close the door behind her. She walks toward a feeding station where her RFID (radio-frequency identification) tag is read and a bowl swings out and her food is released. Once the sow is finished she is trained to head to the other side of the feeding system and back into the barn. (Farmers say the training process isn’t so tough – the pigs naturally want to return to the barn after eating.) All of the data is controlled by a computer system managed by the farmer. When the pigs aren’t feeding, they’re left to roam.

What could be better than a better pig feeding system? How about a better pig to go with it. That’s where the SVF Foundation comes in. Nestled in the bucolic green hills of Newport, Rhode Island, this high-tech organization is on a quest to save rare and heritage farm animals. They collect embryos and sperm from vanishing varieties of sheep, cows and other animals, and store them using state-of-the art cryopreservation. The hope is that if a rare breed approaches extinction they can jumpstart the bloodline. Think of it as “Jurassic Park” for farm animals. They also breed livestock on their grounds. When the foundation heard of Parsons’ work, they got in touch and made a suggestion: what if they could breed a pig naturally suited to open pen life?

“For years we’ve been breeding pigs to be really big and aggressive because they were housed in individual stalls, and so we wanted them to eat a lot and grow as fast as they could,” said Sarah Bowley, the program and livestock manager at SVF.

With funding from the foundation, Parsons is now working with SVF to find the genetics that make a sow more conducive to open pen living, perhaps a less aggressive, more mothering sow. Once those traits are identified, pigs will be selectively bred to encourage them.

Finding the perfect balance will be tricky. “There’s probably going to have to be some in-between, unfortunately the heritage breeds aren’t as productive as the other breeds, which is, of course, why they weren’t chosen for mainstream production,” said Bowley.

Ultimately, genetics may be just part of the perfect pigpen, according to Parsons. Diversity, training and advancements in the system itself will also play role, he said.

Right now, of course, most farmers can choose to use gestation crates or not. But that may be changing – around sixty companies, including McDonald’s and Burger King have committed to eliminating gestation stalls from their supply chain and nine states have already banned gestation crates. Parsons’ and the SVF Foundation’s work may have arrived at a timely turning point. In the meantime, Parsons thinks there are enough advantages to his system that some farmers will adopt it voluntarily. For instance, the system can be told to dole out individual meal amounts to each pig, mark pigs with a sprayer to remind farmers to administer a vaccine or usher pigs post-feeding through a special exit if they need to be isolated for special treatment. The cost of installing the system is on par with existing ones.

“The technology itself will allow us to do things, in terms of how we care for sows, that we couldn’t do in the conventional system,” said Parsons. “So we see it ultimately as a tool to move the industry forward.”

For now the current system has proved to be scalable and will be in place in 50 farms by year’s end, with an estimate of 100,000 sows in the “Penn” Gestation Housing and Electronic Feeding System. Parsons is also seeing international interest in the open pen models. A year ago he visited Brazil to guide those in the pork industry on transitioning over to open pen. Agricultural leaders from China — the world’s largest consumer of pork — have also trained in the facility and have implemented some of the practices at farms back home.

Parsons’ quest is by no means an easy one — he’s trying to balance the demands of farmers, animal welfare advocates, and consumers. So far, he thinks he’s been successful.

“We don’t want to be seen as an agent of change. We are simply a solution when people want to make the change,” he said. “It’s a very funny time. And how people tend to react to this is challenging. That’s the world I live in.”

As for Bob Ruth of Country View Family Farms he says “he would never throw the gestation crate under the bus.” But “if we can give them the same care and let them move around, why wouldn’t you do that?”