Where have all of the farm vets gone? 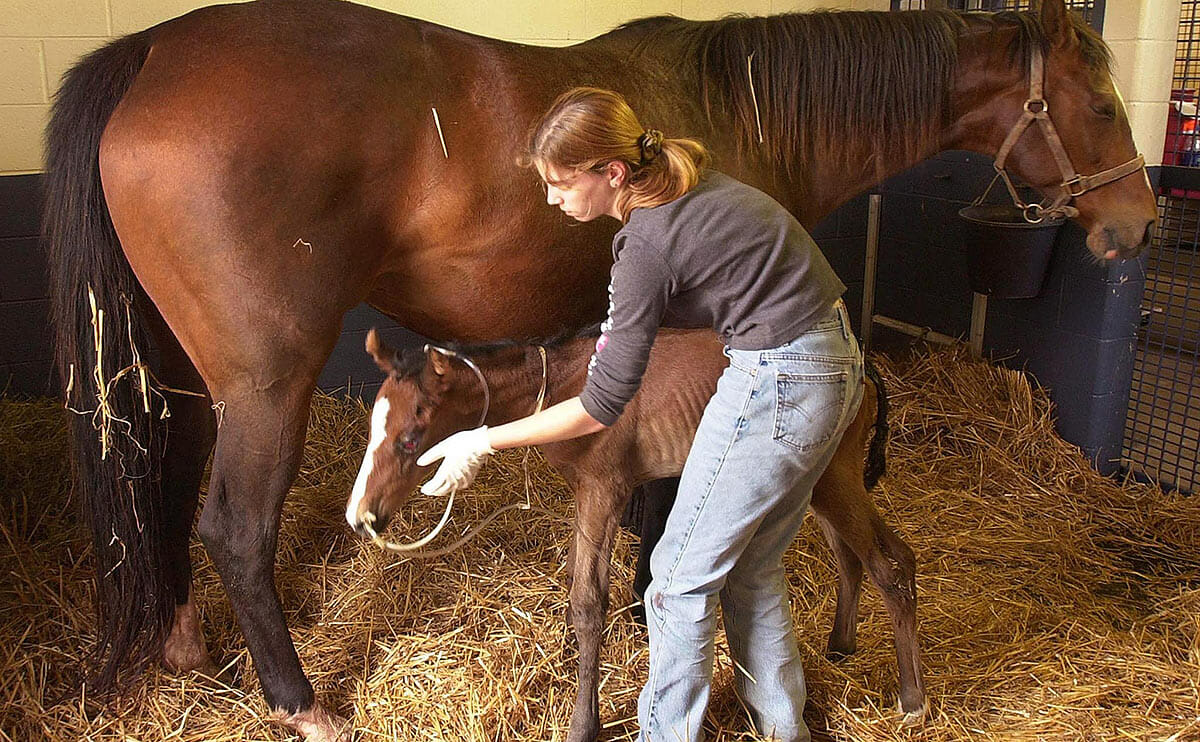 Anecdotal evidence shows that if you’ve ever been a child, there’s a good chance you wanted to become a veterinarian. And if you read James Herriot’s pastoral tales of life as a Yorkshire country vet, you dreamed of chasing pigs and birthing calves as well as treating cats and dogs. But All Creatures Great and Small aside, today’s farm veterinarians face a very different reality than that of an English country vet in the 1940s.

The number of veterinarians focusing on large animals has been slowly and steadily decreasing for years, dropped from nearly 6,000 in 1990 to fewer than 4,500 in 2007. Today, the percentage of veterinarians working exclusively or predominantly with “food animals”, i.e. cows, poultry and swine, makes up only 7.5 percent of the veterinary workforce, and the majority of these vets are over age 50, meaning they’ll be aging out of the workforce with far fewer young vets to replace them.

David Kirkpatrick of the American Veterinary Medical Association points to a societal shift behind the numbers. “Back in the day, veterinarians pretty much treated horses; they were the modes of transportation, the labor, they served in wars. Then the focus switched to livestock as people began demanding more protein. Then as people started moving to cities, as suburbs grew, and the Lassies of the world came around, people’s affinity towards animals as pets grew. So the focus of students who are interested in veterinary medicine has shifted.”

“There are fewer and fewer veterinary students who are interested,” says Dr. Bill Morrissey, a large animal veterinarian who runs Farm Animal Veterinary Services in Woodstock, Illinois. “They can see the writing on the wall.”

Dr. Morrissey says small animal veterinary work is a much easier sell than farm animal work, where wages are usually less and there’s more physical hardship and travel. At a small animal practice, he says, “you can work inside and you can actually have a real life. Rarely are you working in a barn where you’ve got flies crawling in your ear, or when it’s 20 degrees below zero and you’ve got icicles growing on your nose. And a dog bite or a cat scratch are not nearly as bad as a 2,800 pound bull who wants to clean your clock.”

But although the number of veterinary students interested in farm work is declining, a surprising new study by the AVMA shows that, contrary to popular belief, there’s an excess capacity of veterinary labor, even among food-animal veterinarians. “It’s not so much that there are too many veterinarians per se, as there is a certain capacity of their services that is not being used,” says Kirkpatrick, who says that geographic distribution – not enough vets in the right places, and too many vets in the wrong places – may leave some vets underemployed.

‘A dog bite or a cat scratch are not nearly as bad as a 2,800 pound bull who wants to clean your clock.’

Dr. Morrissey says that his Farm Animal Veterinary Services went from a relatively thriving 2.5 person practice two years ago to a one person practice today. Although his practice treats everything from cows and camels to alpacas, llamas, pigs and goats (and even the occasional yak), there’s just not as much work as there once was. “There are fewer and fewer large livestock producers and as they’ve gotten larger they do more work in-house, which is considerably cheaper than what the cost would be for a veterinary professional.” And as demand for veterinary services wanes, rural veterinarians are more likely to travel longer distances to reach their clients. “I may drive 400 miles a day to get to all my stops,” he says. In short, there’s not enough work, not enough money and not enough veterinarians in the right areas, creating what Dr. Morrissey calls “a perfect storm” for large animal vets.

“I was one of those kids that always wanted to be a veterinarian,” says Dr. Lisa Tokach, who works primarily with swine at the Abilene Animal Hospital in Abilene, Kansas. She says that although her work is vastly different from romanticized views of country vets, it’s still a rewarding career. “I read the James Herriot books as a kid and I love them and I reread them to my kids, but that’s not the reality of how it is today.”

Dr. Tokach urges veterinary students who feel an affinity for farm animal work to pursue it, even if they don’t have a farm background. But she says that veterinary students need to know what food-animal work is all about. “It takes somebody who not only has a love of agriculture and production, but who realizes that it’s a business.” Cost, scalability, and food safety all contribute to the complex issues around caring for animals destined to be dinner. “Having a pet dog is not a business. It doesn’t mean that there’s not emotion involved and that we don’t love the animals, but it is a business.”

For both Tokach and Morrissey, working with other humans is often the best part of their jobs. “Farmers are a unique group of people,” says Tokach. “They’re smart people, they’re creative, they’re good problem solvers. I learn just as much from them if not more than what they learn from me.” Morrissey says that because farm vets don’t operate on the tight timetable of a domestic pet practice, he has time to get to know his clients. “The majority of my clients call me by my first name because we’re friends, and they care about me on a personal as well as professional level.”

Amid the shifting industry landscape, there are some things about being a farm vet that just never change. “I get to deliver that special calf through a hard birth, or help with the cow that’s down with milk fever,” says Morrissey. “It’s that immediate ‘bam!’ … you did something really good.”

Morrissey says he wanted to be a veterinarian since he was six years old. And although he previously worked in a small animal clinic, a chance ride-along with a farm vet changed his life. “I knew from the instant I got in that truck that that was where I wanted to be.”