How to Preserve Urban Ag in the Bay Area

How to preserve and grow urban agriculture in the Bay Area. 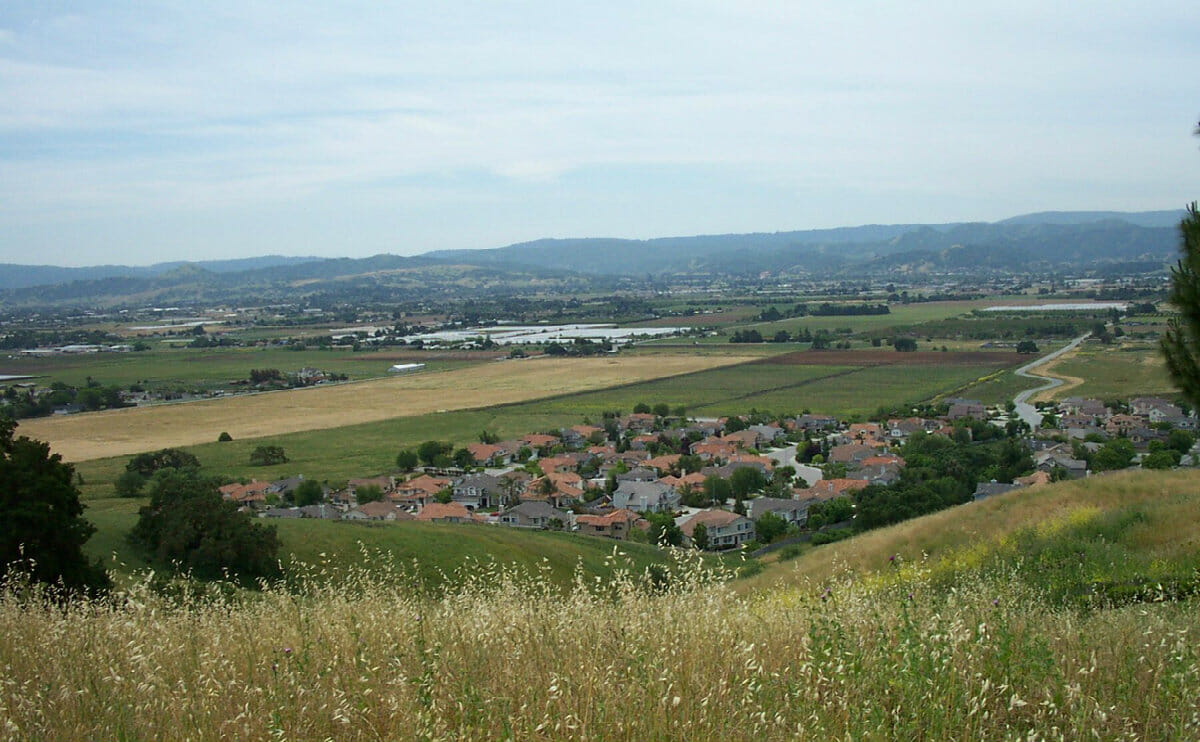 Local, sustainable food is more or less synonymous with the Bay Area: between San Francisco’s urban flora and the agricultural bounty of the counties in the region, it’s often portrayed as a latter-day Garden of Eden. But although local and sustainable food is a beloved concept among many San Franciscans, a new report from SPUR, an advocacy, planning, and civic non-profit organization, illustrates just how much more can be done to create a better regional food system in the area.

Among other things, the report, Locally Nourished, highlights the statistic that 15 percent of the Bay Area’s farmland is at risk of being developed over the next 30 years, and makes the argument that preserving the land for farming and concentrating growth in urban areas isn’t just better for agriculture, but the region’s environmental and economic health. We spoke with Eli Zigas, SPUR’s food systems and urban agriculture program manager, to learn more about the report, the Bay Area’s land-use challenges, and the potential benefits of a stronger regional food system.

Modern Farmer: How did this report come about?

Eli Zigas: We do lots of reports like this at SPUR; we’re a think tank and advocacy organization that looks at issues in the city and at the regional level. We started our food systems and agriculture program two years ago; our first report was on expanding the use of public land for urban agriculture in San Francisco. This is an attempt to take a step much further back and ask the question, ‘Why should we care? What sort of benefits do we get from a regional food system?’ We tried to focus on the ones that are more measurable — as a policy group, we tend to focus on those because other people do a great job talking about non-measurable benefits like cultural, historical, and ecological awareness, the things that motivate many people to buy locally or get excited about going to farmers’ markets. This was to look at, can you put a number on that?

MF: Your report has a so many well-researched and smart policy recommendations for doing things like preserving agricultural land in the Bay Area, reducing food waste, and building a more connected, sustainable network of food producers, but how do you take get good ideas into the hands of people who are in a position to make real change?

EZ: I think that’s always the question for any advocate: How do you take ideas and get them implemented? For SPUR, it was first get the ideas out there, then build a base of supporters and talk to people who do have votes. A lot of these ideas we didn’t come up with on our own; many have been trying [them] in some ways. This report is amplifying these ideas and trying to put them more on the front burner. With a couple of these, we’ll be working directly on them, like food system infrastructure and strategic plans for processors and manufacturers. We’ve partnered with the San Francisco Planning Department, as well as independent partners, businesses, organizations like the Greenbelt Alliance, and authorities working on farmland preservation. And we think that part of [the report’s] role is to give officials a primer: Here are the issues, here are the difficulties of policy barriers.

MF: One of the big questions looming over the report seems to be, how do you convince policy makers to support farmland over housing development?

EZ: The Bay Area, while we have much work to be done, has done a very good job protecting open space, including some agricultural land. Although we’re raising an alarm, we do want to recognize there has been a lot of great land preservation success. I was giving a talk about the report and a woman in the audience raised her hand. She was a housing developer in Sonoma, and basically said, ‘I’m sympathetic to what you’re talking about, but some of your policies make it more difficult for us to create housing; [they increase] the cost and we pass it on to customers.’ I’m not sure every developer feels that way, but my response is a lot of what we’re talking about is internalizing externalities, the negative problems you get from sprawl, and putting that into the price of housing, or internalizing the benefits we get from agricultural land and making that part of the price when we pave it over. It’s a tension and there needs to be balance. SPUR feels like we certainly have housing needs in the Bay Area, but that doesn’t have to happen on green fields. We can densify, and we should. There is room to grow in our already urbanized areas.

MF: Along the same lines, I’ve heard arguments that public space should be used for housing development, not urban agriculture.

EZ: I will argue until I’m blue in the face that urban agriculture is important. Our first report is very strongly arguing that we should have more space to grow food in the city. That said, in a city like San Francisco, urban agriculture isn’t about the quantity of food you produce; you’ll never be able to produce enough for ourselves within the city for long periods of time. The economics don’t work.

But to the bigger question of should we reserve space for the growing of food or parkland in cities when we have a need for more housing, it’s a false choice to say we have to choose between housing or open space. Personally, I wouldn’t want to be in a city that didn’t have open space, but I certainly understand the concern of using land wisely. Reserving space for parkland in cities and [reserving] large pieces of land for agriculture serve different purposes. Large farms produce lots of food. Small farms don’t, but can help teach people and make them understand: ‘Imagine what it took to produce that potato. What if you had to feed thousands of people? What would you do?’

MF: So what kinds of tools are effective in preserving public land?

EZ: There’s a whole table of tools within the Bay Area; we have a variety of different approaches county by county, and area by area. History has shown that if you leave it to the market alone, without regulation, you will continue to see sprawl, so you need a policy if you want to prevent sprawl. How strong of an intervention you have in the land market depends on what people are willing to accept. Napa has really strong regulations, and very strong agricultural zoning throughout the county that only allows for so many dwellings or buildings per large acreage. The county sees a lot of value in that because of the wine and tourism industries. Santa Clara is an opposite example: it became Silicon Valley. The land was less valuable for orchards than tech campuses and housing.

Policy-wise, easements have done very well. When people decide to tax themselves, which Sonoma did, the sales tax provides money to the county to acquire both open space and agricultural land. And then along the peninsula, it’s philanthropy, a pitch in private funding to acquire land. Urban growth boundaries are something to push for and are an important policy. In [the East Bay town of] Brentwood, they have this agricultural core [or land trust] and a number of other policies that were challenged at the ballot from people who wanted to develop in that area. It went to the ballot twice in a few years and both times voters held on to land protection. That takes a big campaign and people willing to say, ‘Well, you’re promising one kind of benefit, and we want another.’ It’s a mix of having money to do easements to permanently protect the land and having a constantly vigilant political base.

MF: So often, though, developer money wins out over public sentiment and political campaigning. So how do you fight that?

EZ: What it comes down to is convincing people that it’s worth it to hang on to [the land]. You can do that in a number of ways, [by] appealing to both intellect and emotion. I think we lay out, Here are the benefits you get from holding onto land. It begins from the principal that having a greenbelt is important.

There are some groups that will say preserve open space, and you say great, we’d like to building housing, and they say no, that will ruin the character of the city. So you’re saying no in both places and that creates problems of its own. SPUR is keen on saying we want to hold on to the greenbelt because we want to create development inward. You’re saying we’re not opposed to development, we think it’s important for the economy. Just don’t do it on the greenbelt.

MF: One statistic that struck me is that in 2010, food industry jobs comprised 12 percent of the Bay Area’s 3.2 million private sector jobs, which is more than the information, finance, insurance, and construction sectors combined. Although much of that figure is concentrated in the restaurant and retail sectors, it seems like the numbers are certainly there to create and support a more sustainable and well-organized regional food system.

EZ: If you can get more businesses near each other, they start to identify as ‘I’m part of the food industry.’ And then if a number of farmers realize this, they start to form a co-op. And then if they say, ‘Yeah, our biggest market is in San San Francisco,’ then you get more [potential partnerships]. Even in restaurants that source locally, they see themselves as a much more aligned part of the industry with other local suppliers and sources. When we talk about a regional food system, we’re making the point that the entire loop can happen in the region. In many cases, it doesn’t: apples from Sebastapol get processed and shipped around the world. The region is connected to the national and international food system, but a big part of what we’re saying is we get certain benefits when we keep that loop in the region. If you have business partnerships within the region because of geographical proximity, people start thinking of themselves as a regional food industry where I rely on you to get or buy a product, and it’s more clear than I send it to a distributor and they take it from there. When it happens closer, maybe you start thinking, ‘Oh yeah, ecology. Maybe we should be advocating for similar things.’