I Am the Man Who Makes You Want Your Food

I am the person who creates grocery print circulars - the small paper ads, usually four to eight pages, that come in the Sunday newspaper, or that sit in displays at the entrance to the store. And I want you to want this food. 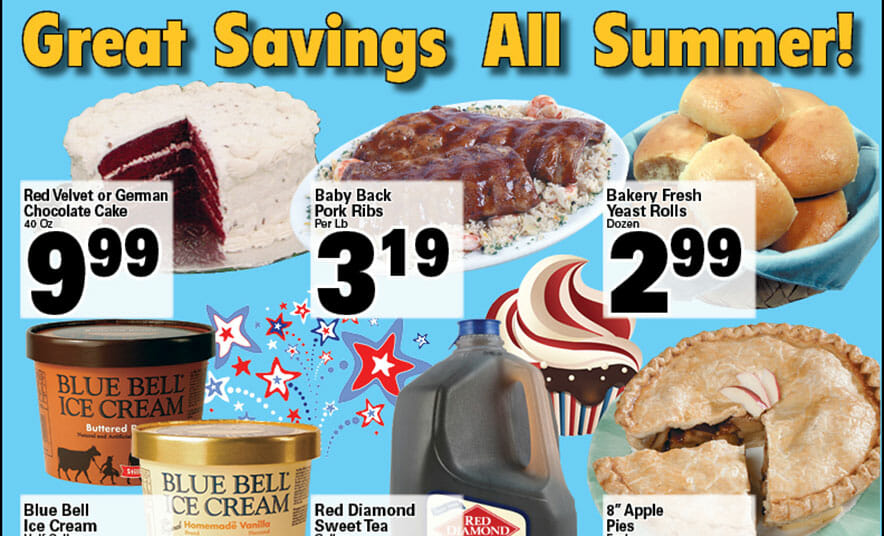 I was 16 and looking for a way to earn money when my uncle opined that he had too much work on his hands. He runs his own business designing print circulars – the small paper ads, usually four to eight pages, that come in the Sunday newspaper, or that sit in displays at the entrance to the store. His customers are independently owned grocery stores (large, chain markets do their advertising in house). Though I knew nothing about advertising, he took me on as a typesetter.

I know that the phrase “Select Varieties” can be used to describe just about anything. Ditto: “Fresh,” “Sweet,” and “Juicy.”

I receive ad copy in various forms: some clients provide us with spreadsheets, some even give us hand written pages. Some clients draw out the ad on a sheet of paper, tiny square boxes delineating the space between one item and the next. I take this copy and transfer it into the computer without thinking, then send it to my uncle for proofing.

After five years of doing this, I know so much more than I ever thought I would about these thin sheets of paper. I know, for instance, that consumers look mainly at the pictures instead of reading the text. So I try to make the images large and inviting, as if they are bursting off the page. I know there are dozens of Internet databases filled with thousands of high resolution images of ketchup and pickles and shampoo and beer. I know that it’s someone’s job to take these pictures all day – to set up little studios to photograph different brands of mustard and all the varieties of squash. I know it’s better to put the description under the picture instead of on top so you don’t confuse the reader. I know that the phrase “Select Varieties” can be used to describe just about anything. Ditto: “Fresh,” “Sweet,” and “Juicy.” I know about the heavy-hitter items, the ones that are always on sale: cereals, soft drinks, milk, and bread – all of these items are displayed prominently on the front pages of the ads. And I know the things you’re never supposed to do: using an image of a 36 oz. bottle of ketchup when the text calls for a 24 oz. bottle can lose the client – and us – a lot of money, because the customers will want to buy the larger bottle for the price of the smaller one. Misprinting a price can lose us a client.

These ads aspire to be little artworks and we use the same techniques as painters. Ice cream, for instance, will often be displayed in multiple flavors, the chocolate image placed at a diagonal to the vanilla image to give the illusion of depth. This illusion is enticing because it makes us forget that we’re looking at a sheet of paper and not real gallons of ice cream. “Enticing” is the very thing we’re trying to express: we aren’t really selling groceries; we’re trying to sell desire. 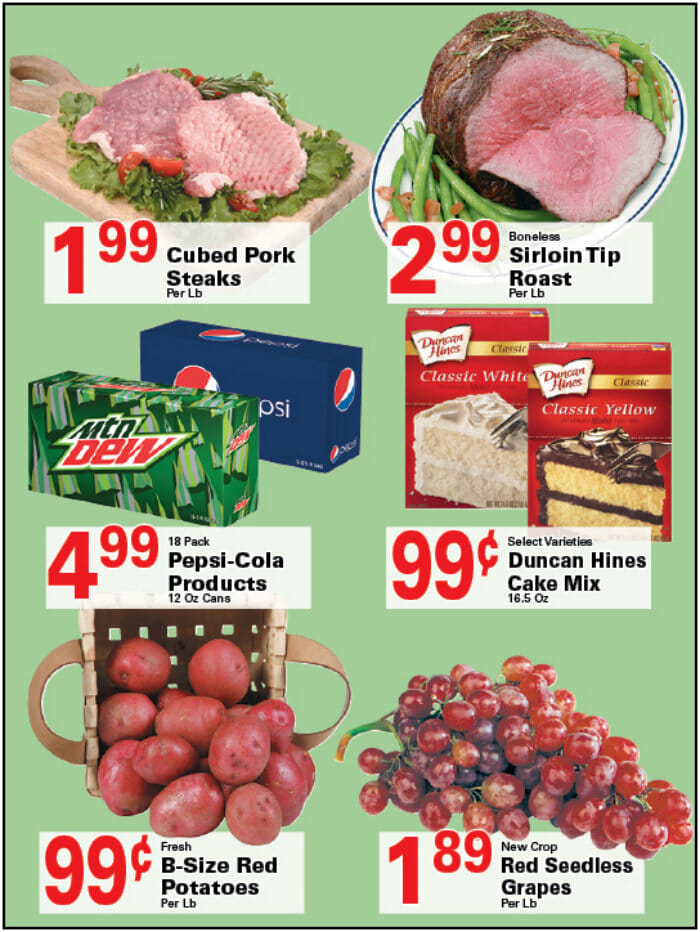 But, of course, many of our clients don’t understand this. They aren’t advertisers; they’re grocers. They are trying to sell groceries, and lots of them. The copy they give us – the copy I have no authority to change – is often many, many pages long, and filled with dozens and dozens of items. An ad with five items has the potential to be a piece of art. In the same space, an ad with fifty items can’t be much more than a list. And the copy is chock-full of predictable words and phrases like “Super Fresh!” and “Great on Salads!” and “Amazing!”, each punctuated with another exclamation point to inspire excitement for “Bargain Prices!”

And in these phrases lies my conundrum: I know almost nothing about the food that I’m selling, or where it comes from. I don’t know anything about growing seasons, so how can I know I am not lying when I type “New Crop! Red Potatoes?” How can I know if the red leaf lettuce is “Fresh!” or the snap peas “Local!”? When I wander through the grocery store aisle I don’t think: “What can I put in my body that will generate the most energy?” or even really “What can I put in my body that will taste the best?” Instead, I think: “These sale items could be placed more prominently at the end of the aisle” and “This bakery sign is kerned too tight” and “The sizes on these items are misprinted.”

What I do lies in the grey area between what corporations want you to buy, and what you think you want to eat.

I see food as a product, an image file to be placed into InDesign, a group of text to be typeset. And though my job gives me a special insight to the world of food-as-product, I don’t think I’m alone in seeing it this way. All of us have to eat, but so few of us spend the time to learn what it is we’re eating. The copy I’m putting into these ads often isn’t even decided by the stores that are selling the items – the on-sale goods are determined by their suppliers, who send us ad copy based on deals they strike with the factories and corporations who are selling the food.

Sometimes I think I may be a villain, trying to sell you an idealized version of a tomato. You might even go so far as to say that I promote an unsustainable kind of consumerism, one that’s threatening the health of the country. But I think it’s more complicated than that. What I do lies in the grey area between what corporations want you to buy, and what you think you want to eat. There is a large and intricate system of selling that stretches all the way from the major food corporations straight to your plate. I’m just one of the links in that chain.