New York’s Only Organic Mill Could Go Up in Smoke

The only 100-percent local and organic mill in upstate New York suffers a devastating fire -- and turns online to try to rebuild. 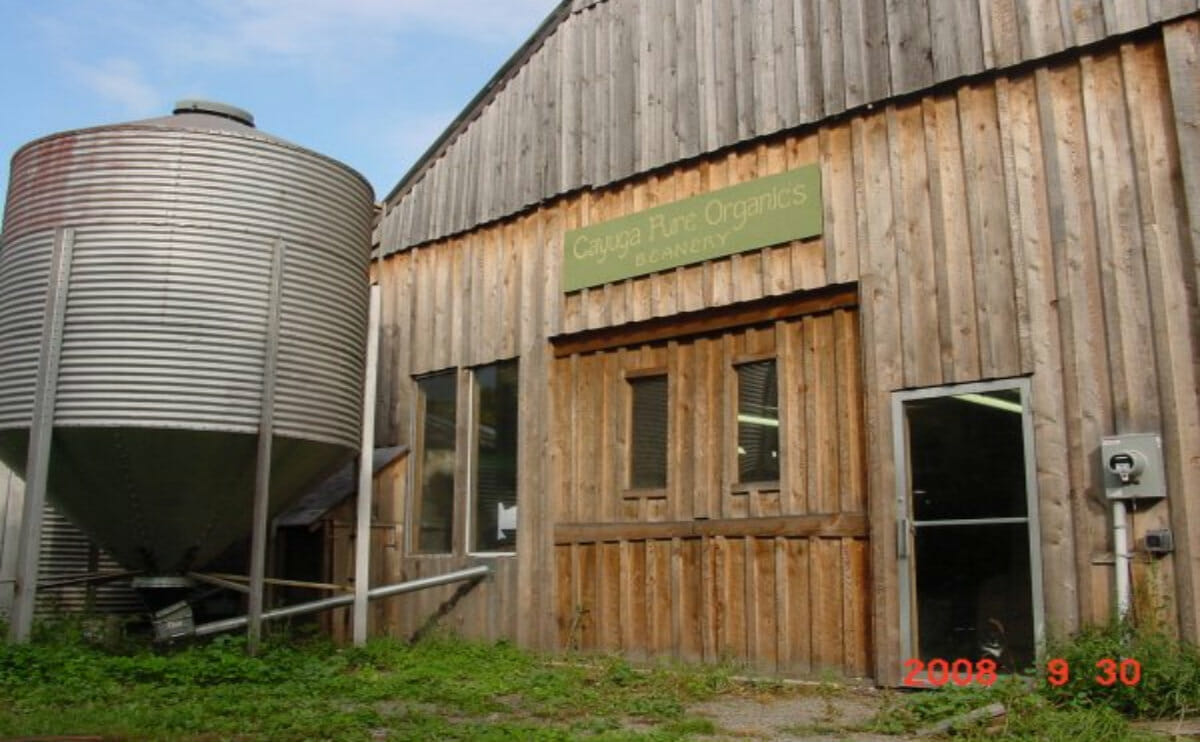 Although its black beans are its biggest seller, Cayuga’s heirloom beans, heritage grains, polenta, and flours have also earned an enthusiastic following among chefs and home cooks, many of whom were first introduced to the farm’s products at farmers’ markets throughout the region.

On May 30, Cayuga’s entire processing facility, or beanery, was burned to the ground in an accidental fire, putting the future of the farm, which is outside of Ithaca, in considerable jeopardy. In the wake of the fire, the farm’s small staff rallied to create an Indiegogo campaign to raise the $238,350 needed to buy new machinery and rebuild the Beanery; so far, $35,272 has been pledged. Anne Riordan, the director of farming and milling operations, spoke with us about the fire, the fundraising campaign, and what will happen if the farm doesn’t reach its goal.

Modern Farmer: What caused the fire?

Anne Riordan: A seven-year-old in the hay with matches. It was pretty classic, unfortunately.

AR: We have had to halt production and we’ve set up a temporary bagging station in our warehouse. We do 25-lb. bags and 1-, 2-, and 5-lb. bags as well, so we had to stop doing those for awhile because we didn’t have any labels or heat sealers or anything like that. But we’re back up and running with that, so that’s nice. The original donations allowed us to buy a heat sealer, which was great; it’s a long story, but for health issues they want us to heat-seal our bags. [The donation] is an example of community generosity: the Brooktondale market just rallied the community of Brooktondale and gave us that so we could buy [the heat sealer]. That was before the fundraiser. [The fire] was such a big catastrophe; we were almost paralyzed at first. We didn’t know what to do, and weren’t sure how to go about it. There was so much to do.

MF: How did the campaign come about?

AR: We were looking at Kickstarter but we decided to use Indiegogo because unless you reach your goal on Kickstarter, you don’t get to keep any of your money. We’re asking for such a large sum — they’re not cheap, these processing facilities — and if we raised even $125,000 on Kickstarter we would have lost everything if we hadn’t reached our goal.

We have been up for 10 days. We have about $35,000 from 452 donors, which is incredible. Our big strategy is going to be to literally to push this site on anyone we know to get it to our goal. We want it to go viral.

MF: Are you still able to keep up your presence at New York’s farmers’ markets?

AR: We are definitely in the city; this would be the last time we would want sales to fall off. We need people to know we’re still there and producing stuff. Things are moving along at a good clip — in fact, I’m behind. We can’t clean stuff right now but we’ve kind of mocked up a temporary set-up which we’ll be trying to put into place soon, so we’ll be able to create all different kinds of grains.

MF: What kind of beans and grains do you grow?

AR: I grow eight kinds of beans, winter rye, spelt, winter barley and oats, and an ancient grain called emmer, or farro. And then field corn for an organic dairy farmer and popcorn this year. None of my seed was destroyed; it was only the processing and packaging bit that was destroyed.

MF: What happens if you don’t meet your fundraising goal? Do all of your buyers know what’s going on?

AR: We’re going to be in very serious trouble. There’s good chance we won’t survive that. Processing is so integral to what we do. There’s been a huge amount of support and like I said, there’s been community support. We’ve emailed all of our restaurants, so yeah, people definitely know and they do reach out and offer condolences. What people can give, they will give. People have offered random things lying around their farms and houses.

MF: How long has the farm been a part of the community?

AR: Erick [Smith, the farm’s founder] was a math teacher at Cornell but grew up on dairy farm and wanted to go back to farming. So in about 2003, he and another older gentleman decided they wanted to grow organic dairy feed. They started doing it and had a lot of fun and were approached after a couple of years about doing beans for human consumption. We’re the only ones [who grow them] in the Northeast; everything else is trucked in from Idaho and, god forbid, China. So around 2008 or so we started to do dried beans and crops for human consumption. The niche is there, but people don’t understand how difficult it is to grow organic beans or how small we are. People in the city don’t believe someone is standing there for 10 hours with a heat sealer, literally hand-bagging everything that comes out.

AR: That depends on customer demand. We have 350 acres total and have a five-year rotation. Beans need five years in order to be healthy and reduce disease, stuff like that. Seventy acres of beans yields 70,000 pounds of beans every year. Eighty acres of grains yields 160,000 pounds of grains. Our rye yields are going to be great this year, barring another unforeseen catastrophe.

MF: How many people work on the farm?

AR: There’s Erick, the big boss; me, I do all the field work; Amy the accountant, Harlan the field mechanic and then Harlan’s partner, who does the small bagging. We’re a very, very close-knit family. It’s a huge amount of work. Everyone on the farm are our go-to people in real life.

MF: So if you don’t raise the funds, when will it start to be a problem?

AR: At this point, we have some [inventory] left over. Some pinto beans and black beans, which are our biggest seller. We got that from people we contract to grow those for us because we don’t have as much acreage as we need. Heirloom beans, we have some of those left over; we never get as much of a yield because they’re notoriously wimpy. We’re out of grains until I can clean them. I can’t sell [product] until I clean it; it will just be sitting there. Once the beans are planted we’ll harvest them in September, October, November. Those will sit there too; they need to be cleaned because they have a lot of junk in them. On big farms, they don’t even have to be there — the machines do everything. [Customers] want zero rocks in a 100-lb bag of beans. The reason we’re alive and kicking is because customers love us; we have a local niche. We wouldn’t survive anywhere else. We’ve timed [the campaign] to finish at the end of July; we need to get this stuff up and running ASAP. We have all our fingers and toes and everything else crossed.