Creating Cosmopolitan Chickens, One Hybrid at a Time 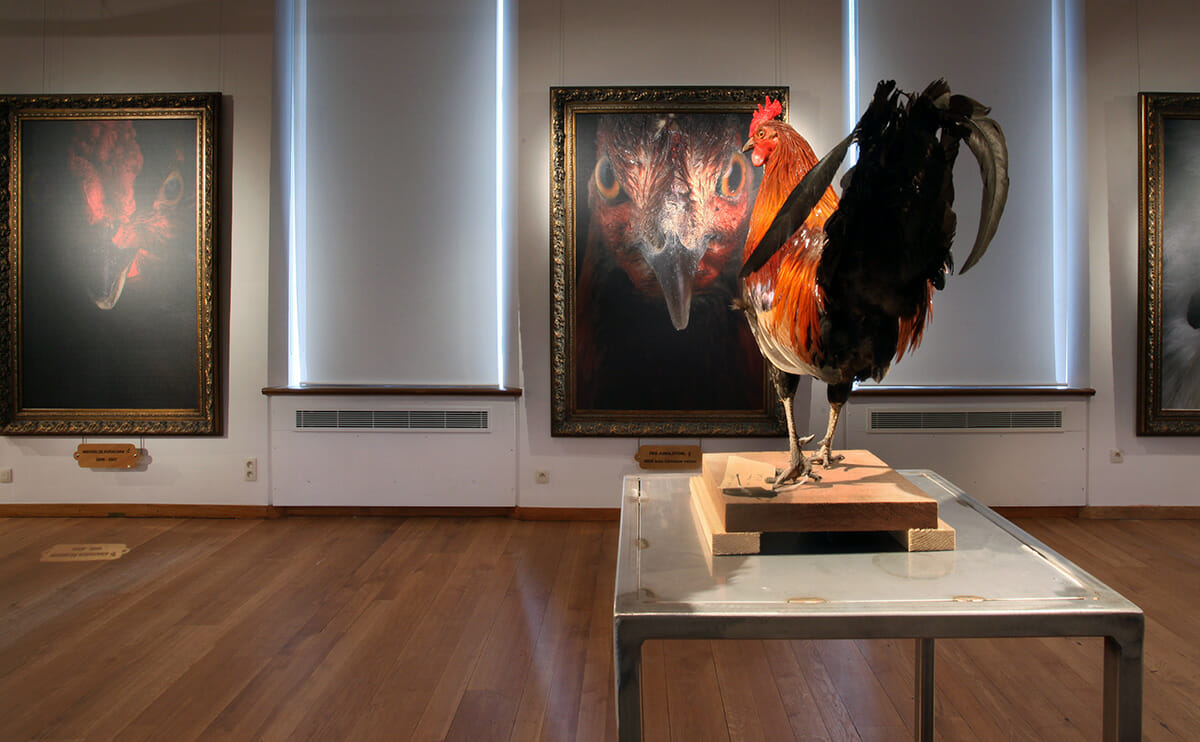 Canadians have a reputation for keeping their patriotism discreet, but the nation’s longstanding willingness to raise foreign chickens was just too much for Quebec’s Wilfred Chantelain to bear. In 1907, the Trappist monk set out to create a distinctly Canadian chicken, with an abbreviated wattle and high tolerance for cold. He mixed and matched representatives of the Dark Cornish, White Leghorn, Rhode Island Red and White Plymouth Rock breeds to produce the white-feathered Chantecler, equally good for eating and laying eggs. But once Chantelain had his ideal bird in hand, the relentless crisscrossing ceased: In chicken circles, breed purity has long been the ultimate goal.

Enter Belgian artist Koen Vanmechelen, who is challenging segregationist tendencies in the poultry industry (and elsewhere) with his Cosmopolitan Chicken Project. It’s the culmination of Vanmechelen’s nearly 15-year old effort to promote global diversity by crossbreeding domestic chickens from around the world. “Because I’m a Belgian guy, I crossed chickens for the first time on the border between Belgium and France,” he recalls. “I think that was a very deep statement. I say, OK, once in a while, you have to crossbreed. Once in a while, you need fresh blood from somewhere else.”

Vanmechelan chose to mess with chickens because they’re associated with so many different culinary cultures, all of which have strategically stamped their signature breeds with their national or ethnic values. American chickens, for example, tend to be large and vigorous. “The basic fact is the chicken is the most domesticated animal,” he explains. “It stands for diversity.”

Since conducting his first cross, Vanmechlan has mingled the genes of chickens from 18 countries: A hybrid hatched in Slovenia this spring represented the 17th generation of his universal chicken vision.

Some nationalities have proven easier to incorporate than others: Shipping three chickens to Moscow for a mating session cost nearly $20,000 in agricultural tariffs and transport fees. And although it was “really important to bring a chicken from Africa to Europe” for philosophical reasons, import laws were so restrictive that Vanmechelan finally had to travel to Tanzania to secure the genes he needed. The trip was successful, Vanmechelan says, if only because it artfully demonstrated the difficulties African citizens face when they try to emigrate.

“My infrastructure is huge,” Vanmechelan adds. “I have eight different farms in the world.”

Although Vanmechelan built a chicken-breeding coop in his bedroom when he was a young boy, he now has very little direct contact with his 3000 chickens. But according to a 2009 Washington Post story, he’s still extremely comfortable around the birds he exhibits in installations documenting his project: “He is inside the cage; he is holding the chicken,” the paper reported. “‘The chicken likes it,’ Vanmechelen assures a visitor.”

The Cosmopolitan Chicken Project was designed to stimulate conversations about how people from different backgrounds interact. But the benefits of crossbreeding chickens aren’t merely theoretical: While scientists are “very prudent” about interpreting results which weren’t obtained through trusted laboratory methods, Vanmechelen says agriculturists have been inspired by his tinkering to include hybrids in their chicken research.

“Before, they were more focused on pure races,” Vanmechelen says. “But after all these years, I saw (hybrids) live longer, they are more fertile. Crossbreeding keeps chickens fresh, it keeps chickens strong.”

Vanmechelen five years ago commissioned tests which showed that the project’s hybrids were 30 to 50 percent more fertile than their purebred counterparts, and their capacity to resist disease had doubled. Since chickens were implicated in the spread of the plague and Spanish influenza, they’re been tagged as a potential culprit in a future pandemic, making their immunity a matter of global concern.

“The chicken can give us a lot to survive, but it also can be very dangerous,” Vanmechelen warns.

There aren’t any plans to discontinue the thriving Cosmopolitan Chicken Project, which has now outlived many of its participants. Yet since the project is an artistic, rather than agricultural, endeavor, the chickens remain valuable contributors even after their deaths.

“I never kill a chicken,” Vanmechelen says. “When they die, I stuff them and they become sculptures.”