From fighting strawberry mold to finding landmines, bees are good for way more than honey. 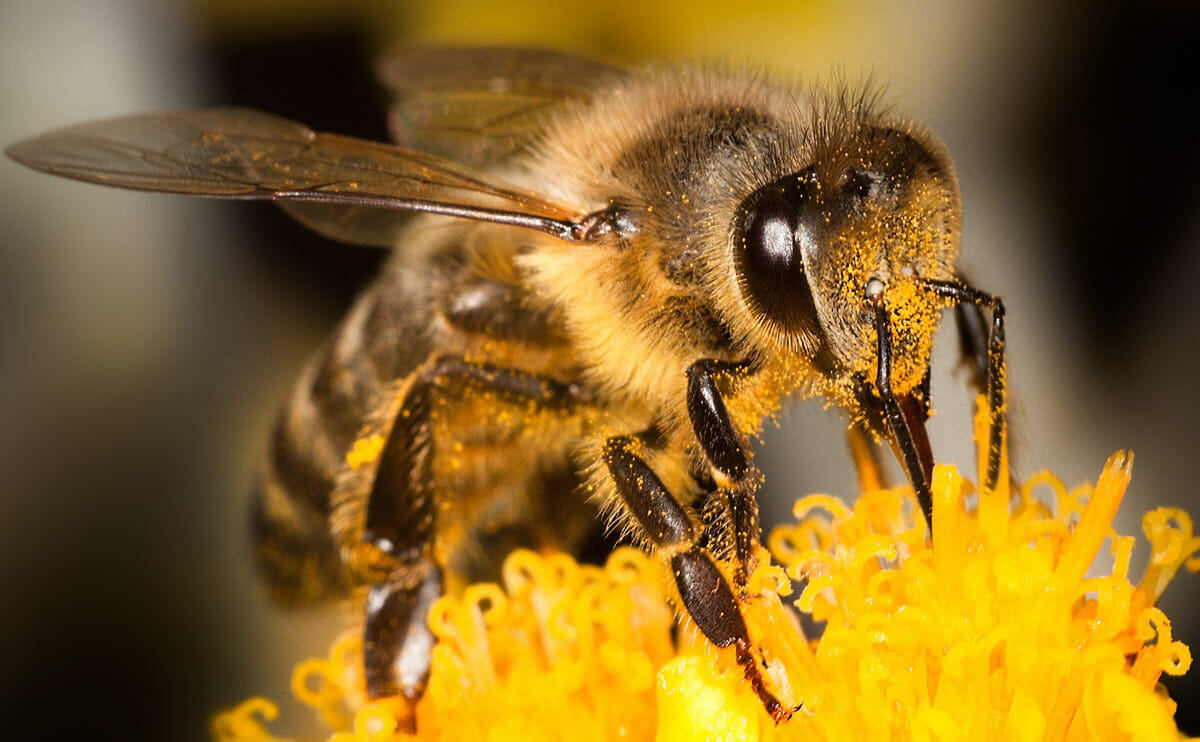 All too frequently, headlines involving bees augur very bad news. Colony collapse, parasitic mites, neonicotinoid pesticides: it’s little wonder that no news is good news where bees are concerned. Last week, however, brought a happy exception: in the U.K., honey bees are being used as a weapon against grey mold, a fungus that attacks strawberry crops throughout Great Britain.

An agricultural consultancy has been testing the use of bees to fight the mold, which only becomes noticeable after the strawberries have been harvested. The bees are directed from their hive through a tray of harmless fungus spores which, when deposited on flowers, protects them from grey mold. Because strawberries flower every day, spraying them with chemical pesticides works only on flowers that have already opened. BioBest, the Belgian company that developed the bee-fighting method, has also used the bees to protect cherry and raspberry crops.

The concept of weaponized bees illustrates the ability of bees to do far more than make honey. Here are a few other ways that their talents are being exploited, and used for inspiration.

The Department of Defense is conducting a three-year study to determine if honey bees can be used to sniff out landmines. Later this year, scientists from the Pacific Northwest National Laboratory and the University of Montana will fit honey bees with radio frequency tags the size of half a grain of rice, and then release them into a minefield. Bees, which have long been used to collect environmental information, are theoretically perfect for the task for a few reasons. The body of a bee will absorb whatever contaminants it comes in contact with. And bees, like dogs, are highly trainable and respond well to food rewards and positive reinforcement. Scientists in the study are using sugar-soaked sponges laced with TNT to determine if the bees will swarm to them: if so, the hope is that the bees will come to associate the smell of TNT with a food reward, and thus be able to locate mines.

Along the same lines, Inscentinel, a U.K.-based company, just received a government grant to test the ability of bees to sniff out explosives in freight bound for passenger and cargo planes. As in the landmine study, the bees will be trained to associate the smell of explosives or chemicals with food; once trained, they’ll be loaded into cartridges that fit into a hand-held explosive detector. If a bee detects explosives it will stick out its tongue, triggering an infra-red sensor and setting off an alarm. According to Inscentinel, using bees instead of sniffer dogs could cut costs by three-quarters; trials are expected to begin at Heathrow next year.

Proving that imitation is the sincerest form of flattery, honey bees are the inspiration for Robobees, a project at Harvard’s School of Engineering and Applied Scientists. Scientists in the study are working to develop robotic insects that can be used for numerous purposes including search and rescue, hazardous environmental exploration, military surveillance, and autonomous crop pollination. The hope is that among other things, this research could help scientists understand how to mimic a bee colony’s collective intelligence and behavior, and even help researchers create new methods of designing and building an electronic nervous system that can sense and adapt to changing environments.

Okay, not really, but this is still pretty cool: in 2010, scientists discovered the O. Avoseta, a rare bee that makes its home in Turkey. Unlike most bees, O. Avosetas don’t build communal hives; instead they construct solitary nests out of flower petals. The bees use the petals as a kind of wallpaper, pasting it together to form tiny single-occupancy cocoons. While there’s as yet no practical human application for this particular talent, the delicate, multicolor cocoons look like they’ve been ripped from the pages of Martha Stewart Living, making one wonder if it’s only a matter of time until some enterprising designer puts them to work in the hives of the rich and famous.

When farmers in Uganda had a hard time keeping their crops clear of marauding elephants, they tried a variety of techniques to keep the beasts at bay. Electric fences were too dangerous, lighting fires was ineffective, elephants kicked soil into trenches…you get the picture. Eventually beehives were placed on the perimeter of the crops, and the elephants were sufficiently spooked to steer clear. These “bee fences” have also proven effective in Kenya, Zambia and Australia.