In Seattle’s Beacon Hill Neighborhood, a Garden of Eden Is Growing

Seattle will soon be home to the Beacon Food Forest, a seven-acre woodland comprised of edible trees, perennials, annuals and shrubs. 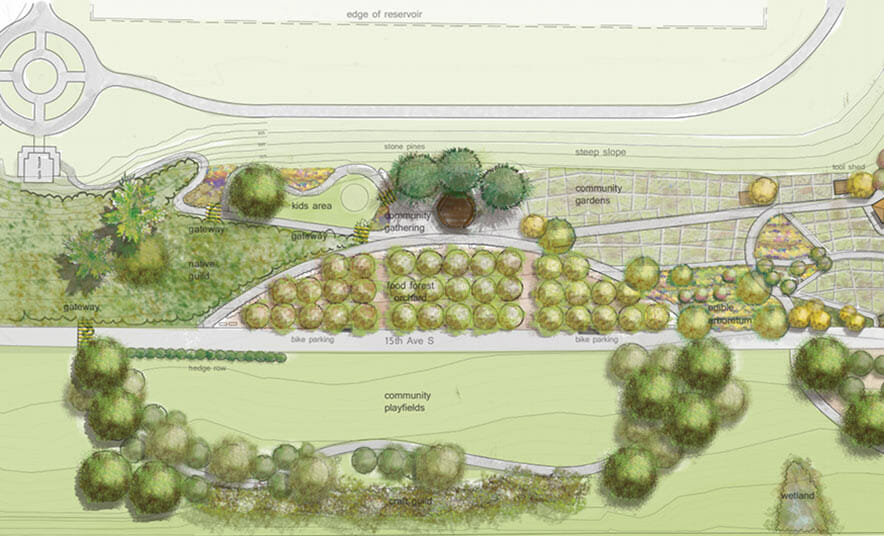 It takes a village to build a forest. Just ask the community of Beacon Hill, a neighborhood in southeast Seattle. Following three years of careful, laborious planning, the neighborhood will soon be home to the Beacon Food Forest, a seven-acre woodland comprised of edible trees, perennials, annuals and shrubs. A triumph of landscape architecture, permaculture design, community involvement and civic support (the forest was made possible in part thanks to a $20,000 grant from the city of Seattle), the forest is set to officially open next spring. Once it’s up and running, it will provide Beacon Hill with its own Garden of Eden. To get a better idea of how one builds an urban food forest, we spoke with Glenn Herlihy, the project’s co-founder and one of the project’s directors.

Modern Farmer: When and how was the idea for the forest conceived?

Glenn Herlihy: It started in 2009. It was a design project for a public engineering design class I was taking; the final project was to design for a piece of land. I was aware of [the space], having lived in the neighborhood and worked with the Jefferson Park Alliance [the park sits abreast of the forest site]. Four of us did the project [including Jacqueline Cramer, another of the project’s leaders], and did a dream design for the full 13-acre area. It got a good reception from community members who attended our presentation. We took it from there — we had an open meeting where we showed it to the community of Beacon Hill, got a good turn out, and took it from there.

MF: When you were working on the design, did you find inspiration in similar projects around the world?

GH: I knew what forest gardening was but I hadn’t really seen a definition of a food forest, so I learned about this in the class and got a more defined version of what it was. After that, I began exploring where food forests were and what they looked like. Most of that was online; there’s an Australian guy named Geoff Lawton who does videos that show food forests around the world. We didn’t design from them directly; we had a grant to hire a certified landscape designer and had meetings not only to teach [the community] but to see what they’d want as well. So [the design] is through community input it’s a blend of as hardcore a food forest as we could get within a community food garden.

MF: What kind of plants and trees did the community want?

GH: Blueberries and fruit and nut trees. But they also wanted a children’s garden and gathering places where we could celebrate. They wanted it to be open to the public with a park-like atmosphere, with good paths. Because we’re next to a park people saw this as an opportunity for a food park kind of garden, and we agree with that. So the community is learning about food forestry and public land stewardship and taking care of trees in the process.

MF: So what will the eventual blend of edible trees and plants look like?

GH: Well, we haven’t quite finalized that decision. We see this as an opportunity for an international kind of food forest because we’re a very diverse neighborhood in a very diverse part of southeast Seattle. We’re looking to the community to help bring in ideas for fruits and trees, so the opportunity is still open to see what we can plant and we’re willing to make that experiment and give it a try. Our creative endeavor is to be experimental and to try to find plants that may be very beneficial to the groups that may eat them.

MF: Where does the project currently stand – how close are you to its completion?

GH: We’re doing two of the seven acres. We’re still in the construction mode; we’ve planted a lower section which is a lot of fruit and nut trees, and then sheet mulched another area to be planted this fall. We’re still working on the water system, and recently students from the University of Washington’s school of architecture built a whole series of covered areas and tool sheds that are now in place. We still have a construction fence around the site, but those go down within the next month or so. We’re hoping to have a lot of our beds in place and lot of our soil sheet mulched and ready to plant by the fall. We’ve been working on this for four years, but it took three years of bureaucracy to finally break ground last September.

MF: When do you expect to be finished?

GH: I don’t know if we’ll ever be finished, but for the first phase, we’ll probably be what could be called completed and have a celebration by next spring.

MF: What’s been the most challenging aspect of building an urban food forest?

GH: A project like this, it’s all about the people. Most are concerned about the harvest and yields we have, but what comes first is creating community. Especially our volunteer organization; it’s got to have a steady flow of people coming and going. People management is one of the hardest things to do, and we have a lot of people involved, so it’s really pushed us to understand volunteers and management. And the planning parties: we have those each month [where] we feed 100 people, so that’s a huge effort on top of the design and build of the project. I think we’re doing really well, but one of the biggest challenges is keeping the enthusiasm and the interest going, and keeping everybody feeling like they’re welcomed and wanting to participate. That requires a lot of social media time and outreach efforts. We’re all kind of learning as we go.

The next big challenge beyond that is setting up an educational schedule, because actually what the project is about is educating the community about food and how it’s grown and propagated and seeded and so forth. And then the next job beyond that is how to share the food, and that’s a big question in a lot of people’s minds.

MF: So what’s the answer?

GH: We’re pretty set: we have one area that’s traditional permaculture patches that’s allowing families to get a plot and harvest food. And through signage and community involvement we’re going to say, this is your park, this is yours to explore. Our main goal is to share as we grow; abundance will give us that sense of security from people taking too much. We don’t call it stealing because we’re offering it to everybody, but people could take more than ethically we’re trying to promote. If people come in the night and do steal something, we have five or six other trees that we fall back on. By the ethics of the community garden, the first rights of the food go to people volunteering to do it. We’re saying if you want to get involved, we’re all about sharing food and you have to be open to that idea. We’re very controversial in that area; there aren’t community gardens that offer that because they’re small, so that’s a problem. However, we have a rare opportunity with seven acres to really grow a lot of food where stealing won’t be a problem. Our number one goal is that nothing falls to the ground and is wasted.