After the Tornado, Farm Cleanup Can Take Years

When an EF4-strength tornado hit Northern Kentucky last year, a horrific piece of debris landed on Dave and Regena List's dairy farm: a massive dump truck, and its dead driver. 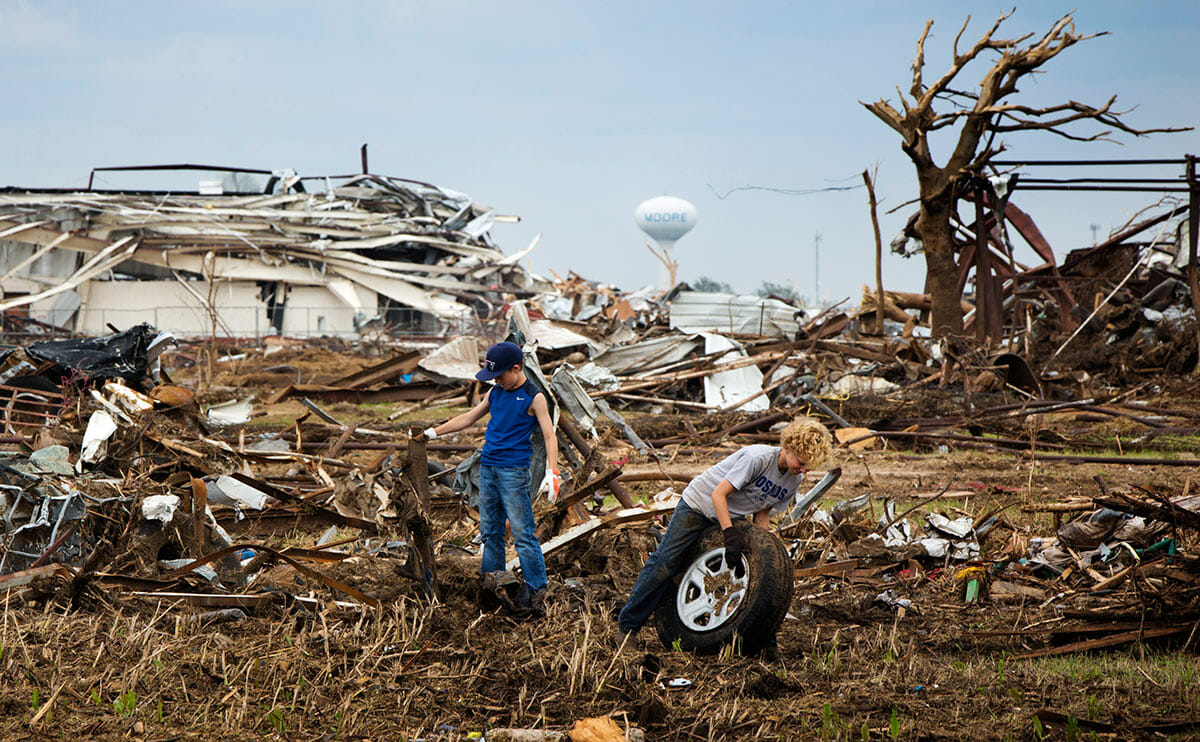 After tornadoes, news media often focus on cities and towns, on destroyed homes and businesses. Farmland debris rarely makes headlines, unless it is truck-sized, grisly or bizarre. But for some farmers, it’s the painstaking, unglamorous debris removal that exacts a tornado’s highest toll.

“It’s not media-friendly, but the problem is quite big,” says Jack Rozdilsky, professor of Emergency Management at Western Illinois University. “Removing farm debris is tedious and labor-intensive, and it doesn’t just go away.”

Tornado debris can muck up soil, damage farm machinery and provide a deadly diet for livestock.

Tornado debris can muck up soil, damage farm machinery and provide a deadly diet for livestock. Rozdilsky has embarked on a public awareness campaign, to show how taxing this debris can be. He would like to see more resources channeled towards farmland cleanup, and to develop solid removal plans.

After the Lists found that grim truck on their land, they spent weeks combing pastures for other tornado-borne flotsam. They collected household items, building materials, machinery and whatever else turned up. Now, over a year later, they continue to stumble on more detritus. “Seems like it’ll never end,” says Regena List.

In the recent tornado in Moore, OK, numerous horses and other livestock were killed by the storm’s direct impact. But Brian Freking, an Ag Extension Agent with Oklahoma State University, says he’s seen “way too many” animals get sick and die long after a disaster is over.

“They’ll ingest hardware or wire that punctures a vital organ, or insulation will get inside and hemorrhage a cow’s digestive system,” he said.

Much of this debris isn’t easy to spot, especially when it’s scattered in tall grass, corn or grains. Tools like industrial magnets and landscape rakes can help, but a farmer often ends up uncovering the debris haphazardly, in the course of their daily duties.

After an EF4-level tornado (one level down from the tornado that demolished Moore) hit Harrisburg, Illinois last year, Allan Ninness, Saline County emergency management coordinator, was surveying damage with his teenage son Jacob. Jacob was shocked to see a “massive amount” of debris in the farm fields, and asked his dad what could be done.

“I told him we needed to take care of the people in town first, and he shook his head and said, ‘Farmers could spend years getting rid of that stuff,'” Allan Ninness said. 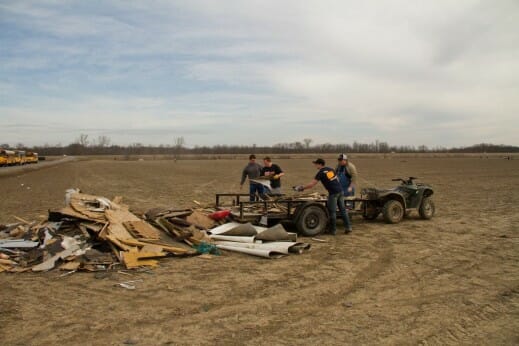 Jacob eventually rounded up a large group of local FFA members for the job (see picture at right), arriving in school buses and clearing 500 to 600 acres. The teens found everything from household valuables and building materials to a mangled “Welcome to Harrisburg, Population: 9900” sign.

Rozdilsky plans to visit Oklahoma very soon, to review the progress of post-Moore cleanup. He anticipates the farmlands west of Oklahoma City have received much of the fallout.

“Don’t misunderstand: towns and cities need lots of help,” he said. “I just think we need to help the farms, too.”

That’s a great article on a massive, yet obscure problem.