We talk to Wayne Pacelle, head of the Humane Society of the United States, about his groundbreaking work on farm animal welfare and the benefits of using the carrot rather than the stick when it comes to working with corporations. 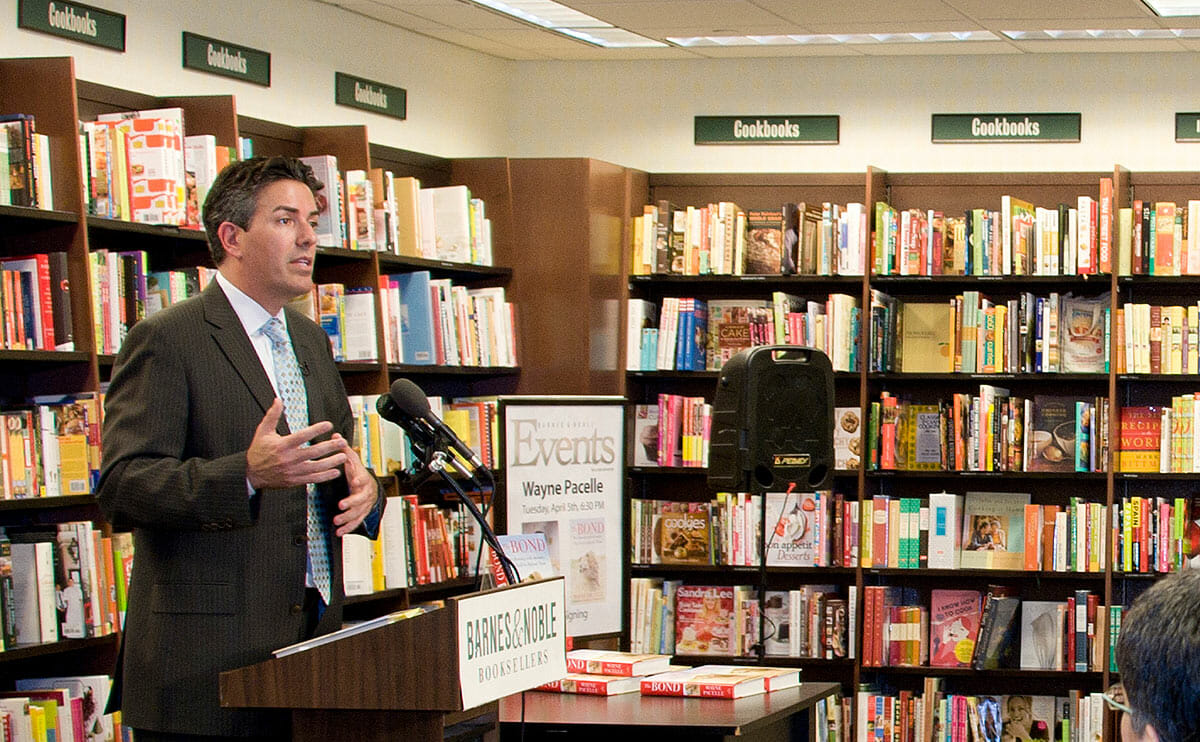 Under Pacelle’s leadership, the Humane Society of the United States convinced over 50 restaurants (like McDonalds, Denny’s and Applebees), food processors (General Mills, ConAgra, etc.) and retailers (Costco, Sysco, Sodexo, etc.) to refuse to serve pork produced by farms that use ultra-confining gestation crates for sows. Pacelle, a sought-after public speaker who became CEO in 2004, also worked with lawmakers to pass ballot measures in Arizona, Florida and California bills outlawing extreme confinement methods for pigs and laying hens. More recently, he has been working to create agriculture councils aimed at getting farmers talking to other farmers in an effort to change notions that gestational crate policies and other humane farm animal treatment issues are just for the liberal elite.

We spoke with Pacelle recently about his approach to animal welfare on factory farms, ag-gag bills, and the benefits of the carrot over the stick in negotiating with corporate food companies.

You started as CEO of HSUS in 2004. How have you gone about pushing beyond the organization’s work with, say, stray cats and dogs to take on factory farming?

Wayne Pacelle: There’s a bit of a misperception about that. The HSUS has always had a broad-minded approach to animal welfare, and that includes farm animals. When the organization was formed in 1954, one of the first major projects was the passage of the Humane Methods of Livestock Slaughter Act in 1958.

But when I took over my post, I felt that industrialized farming and specifically extreme confinement of certain animals on farms was a problem the nation had to grapple with. So we invested more resources in trying to promote the idea of humane and sustainable agriculture. And that’s really our goal, getting everyone in America thinking about their food choices.

You have focused largely on battery cages for egg-laying hens and gestation crates for sows in recent years. Why these two practices?

They are extreme forms of confinement. So much so that the animals are effectively immobilized for most of their lives.

Traditionally a farmer is connected to his/her animals. He knows how they’re feeling, he cares for them when they’re sick, feeds and nourishes, and protects in many ways. The notion of putting an animal in a cage barely larger than his/her body and then multiplying that by thousands of tens of thousands in a single building is at odds with good animal husbandry.

I also felt it was really out of whack with what the American public expects of agriculture. This country takes rightful pride in family farming and good animal husbandry. And this production system is at odds with that notion.

The list of restaurants and food retailers that HSUS has worked with to adopt some kind of policy opposing gestation crates is impressively long. What would a list of companies that have not adopted such a policy look like? In other words, how has HSUS worked with the carrot and the stick?

Nobody wants to be perceived as contributing to animal suffering and when you simply present the facts — that the animals can’t move, can’t turn around, that there’s long-term confinement (1.5 years to 3 years) and that there are alternative methods that are economically viable — it’s hard for a sensible business to continue to stand by a production system that is so at odds with that common notion about how animals should be treated.

So we always prefer the carrot. There’s just no question about it. We want to laud companies for making progress and we don’t say that you have to be perfect in order to get applause from the HSUS. You just have to be conscious and aware and moving in the right direction.

I imagine these companies are hearing a lot from livestock industry sources that say these practices are not a problem.

Absolutely, and for years they heard from those interests and they didn’t really hear a big case made from a reputable animal welfare organization. The question for us is: Where is the center of the American public? And the center is now very solidly with the idea that animals raised for food must be treated humanely. We’re also pragmatic in that we know that these things don’t change overnight. These are phased-in procurement policies. These companies know they’ll have to make capital investments, and create new systems and that’s going to take time.

How many times did you meet with these companies before they decided to pledge to change their buying practices?

Trust is built over time. Some of these companies we’ve been literally talking to for years. We really try to understand what their challenges are in order to help them overcome them, and get to a place where it’s a win for the company and a win for consumers.

Are you seeing the kinds of investments and infrastructure changes that need to start happening in order for some of these companies’ promises and pledges to really mean something?

Yes, we are. The veal industry has voluntarily moved in the direction of no crates. And the industry is already about 75 percent converted. The egg industry has taken a bit of a non-linear path. We were really advocating for a cage-free product. But we did make an agreement — which has yet to be enacted — to significantly expand the size [of the cages] and to provide enriched colony cages. That’s significant movement by the industry to accept a wholly different production system.

We’re still very much at odds with the confinement sector of the pork industry. Despite the large number of companies that have agreed to begin phasing out purchasing pork from producers who confine the sows, the industry is continuing to stand its ground and fight.

What has been more effective for HSUS, state-based policy change or working with corporations to change from within?

I think they’re mutually reinforcing. Our wins on gestation crates and battery cages in Florida, Arizona, California all reminded corporations that the production sector they rely on is not in step with public opinion. And the corporate piece is reinforcing on the legislative side because, in addition to asking what’s right and what’s wrong, elected officials they have to look at what’s practical.

When corporations like Costco say, “We can make this work,” lawmakers presume that Costco has looked up and down its supply chain to see if it’s workable. And if companies that really do pay attention to price point [opt for humanely-sourced meat], it’s clear that it’s not some fanciful idea. It’s practical, it can happen in the real world, and that point is upon us right now.

HSUS is behind a great deal of the recent documentation of animal abuse inside factory farms. What’s your take on the “ag-gag” bills that have passed in half a dozen states this year in an effort to make such documentation illegal?

Dr. Temple Grandin told me she believes ag-gag bills are the dumbest thing agriculture has ever cooked up. As she sees it, it almost amounts to an admission of failure. The suggestion is that if the public sees what’s actually happening inside these facilities, they’re not going to like it.

A lot of the big farm groups have strong ties to state lawmakers. So I think tactically it’s an attempt to play to the their strengths. But the whole thing really rings false with the American public. It seems like it’s a cover-up. And what happens is HSUS investigations are discussed as part of the debate. So the public ends up hearing about downer cows being dragged to slaughter, they hear about hens dying and being mummified in cages, and they hear about sows injuring themselves by pushing against the bars of their cage every day.

HSUS has recently created agriculture councils in several states. Do you want to say more about your relationship with farmers and ranchers?

One really important decision we made was to hire Joe Maxwell, a fourth generation pig farmer from Missouri. It really shows that we at HSUS embrace humane farmers and an alternative production strategy to factory farming.

The agriculture councils are important because the person delivering the message is so important, in terms of how it’s received by the intended audience. And I think that farmers are going to treat these other farmers as good ambassadors for the message. Our embrace of farmers shows that we’re not against agriculture, that we have a positive vision for agriculture.

And that’s a critique you hear from groups like the Farm Bureau – that you’re against agriculture?

Exactly. Anytime you’re challenging folks who don’t want to change, they try to cast you as extreme by exaggerating and caricaturing your views. But it’s tougher for them to do that when you have farmers from Nebraska, Missouri, and North Carolina saying we don’t need to treat animals in harmful ways to raise them on the land.

What is it like to be at odds with Big Ag on factory farms, compared to the other opponents you’ve faced on issues such as, say dove hunting or cock fighting?

Industrial agriculture is a powerful enterprise in our country. While their system was reigning, in a sense, they had their way to do whatever they wanted. But in the last 40 years we’d seen 91 percent of pig farmers, 88 percent of dairy farmers go out of business, and more than 95 percent of egg producers go out of business. So it hasn’t worked out well for the family farmer to have this hyper-industrialized production system. And politically speaking it means that their numbers are shrinking. You have many fewer farmers now than you had in 1975, 1985, even 2000. So it means that their political influence is inevitably on the decline.

They can trade on some of their past associations and political strengths, but it’s going to run out. The better strategy is a way forward that allows for successful production agriculture that also attends to the needs of animals, protects the environment, and produces safe food.