A young oysterman in Georgia has found a way to turn ugly wild oysters into boutique bivalves. But will the industry follow suit? 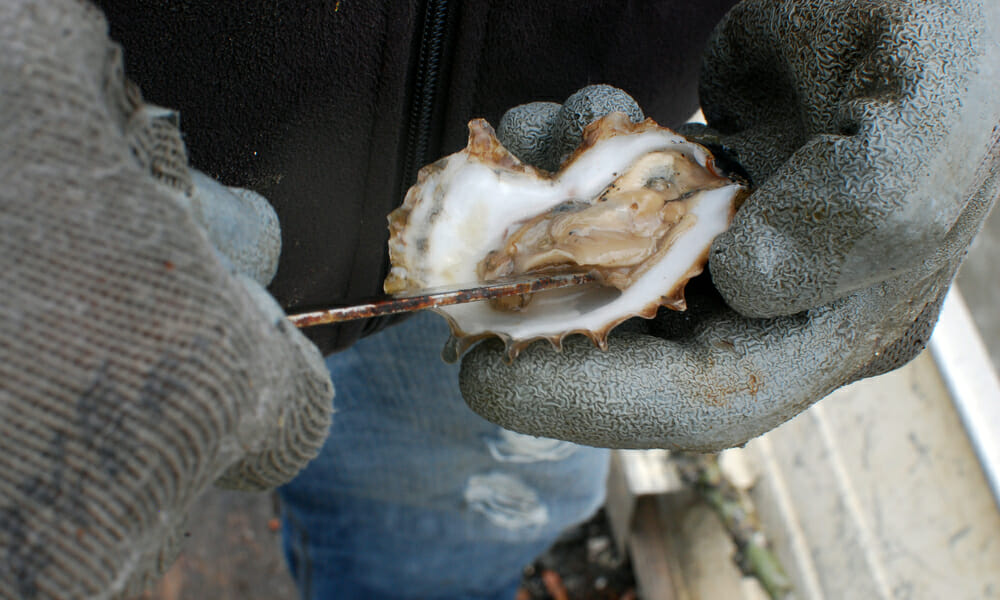 As one hand steers his green skiff through St. Catherine’s Sound, Justin Manley shows off a small laminated map with red lines marking the boundary of his fishing lease. Oystermen keep the exact coordinates secret, Manley says as he guides the boat toward a web of intertidal salt marshes where wild and farmed oysters grow. His colleagues never show off their maps. Consider it an honor.

Here behind Georgia’s barrier islands, 30 miles south of Savannah, Manley and a dozen others harvest oysters. Bivalves grow wild in mounds along the muddy marsh banks and the population is healthy. But shells form on top of shells piggybacking into a craggy pile of calcium carbonate that’s difficult to harvest and hard to market beyond selling sacks of oysters for beach-side roasts.

Wild oysters produced in these salt marshes are ugly and unloved by upscale restaurants in Savannah. Chefs love the taste, but the shells are brittle, hard to shuck and often slice into the brave hands that dare try to pry them open with a knife. Compared to the perfect stair step gradients of the Cape Cod’s popular Wellfleets, Georgia’s marsh grown oysters lack defined shape on their own and bloom like a demonic bouquet in groups.

Manley, who before starting his Spatking Oyster Company studied oyster biology and researched aquaculture, is trying to introduce a simple yet revolutionary seafarming method into this small, rather backwoods industry that once shipped oysters around the country. Currently, seafarming accounts for a tiny percentage of oysters growing in Georgia, and most of that process still creates the less-salable ugly clumps.

For the last two seasons, Manley has used what’s called a “spat stick” – a young oyster is called a spat – to collect oyster spawn from the water and farm them into beautiful single oysters perfect for fine dining ”“ and lucrative for the seafarmer.

This ugly oyster solution is derived from methods used in Australia and France, but is made cheaper and simpler using Manley’s method: Season a piece of bendable CPVC, the gray tubing used in plumbing available at Home Depot, in ocean water for a month or two; drive it into the marsh mud deep enough so that it sees some exposure at low tide; and let spat collect on the stick. All along Manley’s lease, collections of spat sticks poke out of the water like bundles of spaghetti. From a distance, they appear similar to reeds growing near the marsh banks.

Once a young oyster grows to a quarter inch, Manley and the few other oystermen who’ve adopted this method bend the stick to loosen the oysters and use a knife edge to scrape off any stragglers.

Young oysters then mature underwater individually in a series of protective mesh bags instead of in a clump until they’re big enough for sale. The resulting edible is light grey in color, ridged at the tip with a deep cupped shell housing a meaty oyster that is as briny as the prized Malpeque oysters of Prince Edward Island and tastes of baked marsh and lemon grass.

Manley is the only Georgia oysterman to fully realize this method of farming boutique single oysters and turn a profit. But his colleagues have seen his success and are following suit.

Yet there’s still work to do. Getting all the oystermen on board with seafarming is one issue hindering growth. Investment is another. So is informing Georgians that local oysters are available. Last year, Manley and Joe Maley, president of the Georgia Shellfish Growers Association, trucked a case of oysters up to the state legislature in Atlanta. They laid out half-shell oysters before the lawmakers and received an undesired response.

“Did these come from Apalachicola?” Joe Maley remembers them asking. They assumed the oysters came from Florida. Like most Georgians, the state’s elected officials are unaware of oysters breeding along the coast.

“The future of the industry isn’t economically secure,” says Manley, who thinks wide implementation of the spat stick is a first crucial step ”“ a “poor man’s” seafarming ”“ to developing a healthy, sustainable oyster business in the state. Someone funding a multi-milllion dollar spat hatchery is the end game.

Georgia’s estuary is one the healthiest that Manley, 37, has ever seen, and it’s a missed opportunity, he thinks, to not return the salt marshes to their oystering glory.

A century ago, Georgia dominated oyster production in the United States. Campbell’s Soup once sourced their bivalves for oyster stew from the marshes south of Savannah. Boiler tanks lined the coast ready to process oysters for stew cans, and some of those rusted bulks still mark the landscape.

Popular thought on why Georgia’s oyster industry disappeared often cites overfishing as the cause. But Manley thinks that while specific locations along the coast may have been overfished, the reason is more complex: Campbell’s Soup closed its plant here during the Great Depression, Maley said; regulations banned dredging in the 1970s; and a dual epidemic of protozoan parasites killed off the stock in the 1980s. Until the late 1990s, the Department of Natural Resources held tightly onto all shellfishing leases, forcing many oystermen to turn to clandestine harvest.

Having spent almost a decade researching oyster spat along Georgia’s coast, Manley doesn’t see how such a fertile estuary could have ever been overfished. What he does see is an industry poised to “blow open,” as long as investors and workers can offer a little sweat. Potential investors, Manley believes, are waiting to see the industry produce a shining example.

Labor, though, presents its own problem. Manley is the youngest oysterman by 20 years. Joe Maley, the association president, is 63. The industry can’t expand on the backs of lone fishermen. Both say the “back breaking” labor of processing wild oysters, which requires hours bent over lopping at clumps with a steel bar, drives away young workers.

Spat sticks and seafarming are more profitable and less laborious than wild oyster harvesting, Manley says, but the challenge is scaling the industry to a size that can attract a workforce. That future starts with a grey pipe.

“The spat stick will create the industry,” Manley says.

Correction: A previous version of this story stated that Wellfleet oysters are from Long Island. They are from Cape Cod.