For our Farmer's Favorite Mistakes series, we talk to a beekeeper. 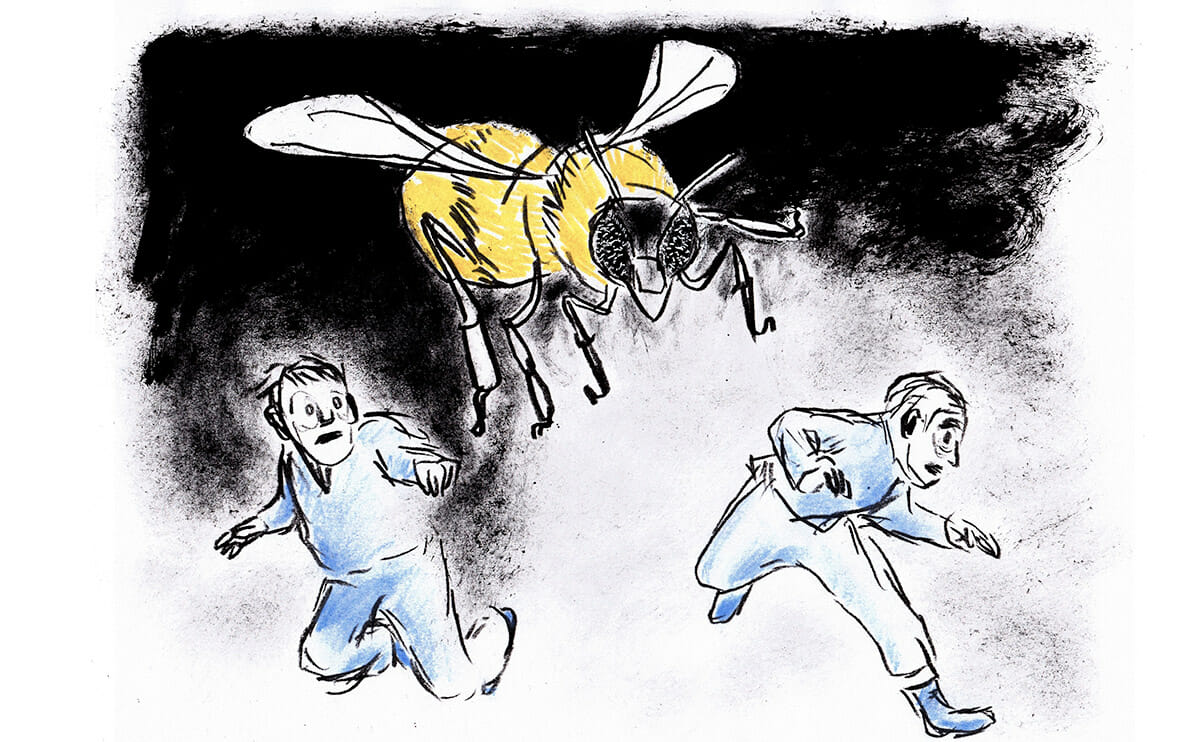 Welcome to the debut of our Farmer Mistakes series, where we talk to farmers about their first-time farming flubs. Modern Farmer interviewed Justin Kerr, a beekeeper in San Francisco who maintains a blog with his friend and partner in bees, Cameron Ewing. The two have also successfully Kickstarted a book designed to help newbie urban beekeepers learn the ropes.

On having prior experience: I definitely jumped in not knowing anything.

On beekeeping motivation: My friend Cameron was on a neverending search for new hobbies – flyfishing, hunting, and so on – and he came up with the proposal, “Do we want to try beekeeping?” I don’t really have any close affiliation for nature, I don’t go hiking, I’ve never had a pet so I thought, I dunno, I should learn more about it.

On training: We went up to Sebastopol to Bee Kind, a place that holds these tutorials. What was funny about that was everyone had these questions about how will bees affect livestock and we were like, well, we’re putting them on our roof. We were all about keeping them in an urban setting. There weren’t a lot of resources to guide us. No one has boiled it down like, “You’re a complete idiot, here is what you do.”

On the homecoming: We ordered our bees on the Internet. We expected them to give us instructions but they just handed us a shoebox with 1,000 bees and next thing we knew, we were driving a PT Cruiser back to SF with 1,000 bees.

On developing a mantra: When in doubt, just stay out the bees’ way.

On bee/human relations: You can visit them as often or not as often as you want. Unlike a dog. I get really annoyed when I ask my friends, “Let’s go get a drink” and they are like, “Oh I have to walk the dog.” Bees are the best kind of pet. 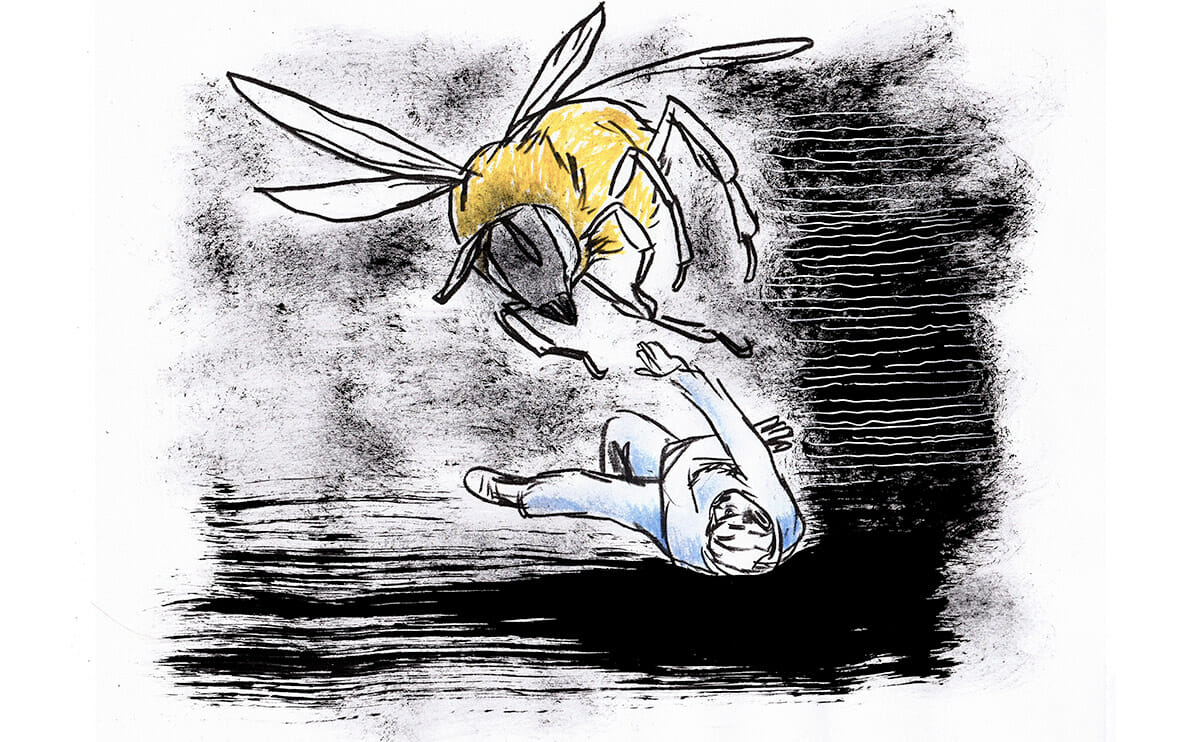 On always wearing the proper attire: So, we’d visit them every week, drink a beer, watch them come and go. But we started to get a bit cocky. [At first] we’d put all of our gear on, tuck our socks in. But then we got arrogant and didn’t do things like, smoke them to calm them down. So I got my first sting.

At first, it wasn’t that bad, but then, a couple of weeks later, I got another one through my gloves. It was three times worse. Sometimes, when you got stung, the poison can build up in your system and it gets worse and worse. One time, my hand blew up to the size of a baseball.

More on wearing proper attire, not getting stung: One time, I got stung on my cheek. I went to work and started feeling a little lightheaded but didn’t notice anything else. My face was swelling up; it was like I had an orange in my cheek. That made things a lot less fun, because it’s like, “Oh if I get stung, I’ll be in pain for a week.” But every time we get stung, its something we did wrong. Bees are defensive by nature. Nature is very humbling in that way.

On not knowing how to deal with swarms: I look out the window and there’s a gigantic swarm of bees flying in a circle. Like, 50,000 bees. It looks like a cartoon tornado floating right outside my bedroom window, and then they gather on a tree across the street.

My bees have swarmed! Swarms, I know now, mean that the bees are overcrowded in the hive or something has upset them. In this case, they were overcrowded. But Cameron is out of town, and oh my gosh, 50,000 of our bees are three feet off the ground on the street. After a frantic couple of calls to Brian, who used to have Her Majesty’s Secret Beekeeper in S.F., he said, “Why don’t you just capture the swarm?” I’m thinking, the last thing I’m going to do is capture a swarm. I’m scared of bees.

But he rides his bike over and stands directly under the swarm. All the bees are hanging together on a branch. I haven’t gone within 20 feet of it. But he comes right over. I bring out a ladder and he takes off his shirt. He sees that I give him a weird look but says, ‘People think I’m showing off but sometimes bees get caught underneath my shirt. He sets up the ladder, rolls a cigarette, standing topless under 50,000 swarming bees. Then he cuts the branch and I’m thinking, “This is great,” but when he’s going down the ladder, he drops the branch. Fifty thousand bees explode when they hit the ground. It’s like an X-Men episode. But none of them sting him! He takes the branch and puts it in the cardboard box and after about five minutes, they start flying and land in the box – they want to look after the queen. After 20 minutes of total mayhem, the bees have all self-organized in the box. It was a miracle experience.

What to know about swarms: A swarm is not that dangerous. Bees are defensive, and what they defend is their hive or brood eggs. When they are swarming, they don’t really have those to protect.

On almost losing half of his hive: If I had just stood there and watched them, which I was doing, they would find somewhere safe to hangout and then send scout bees to find a new location. They were flying all over the neighborhood. 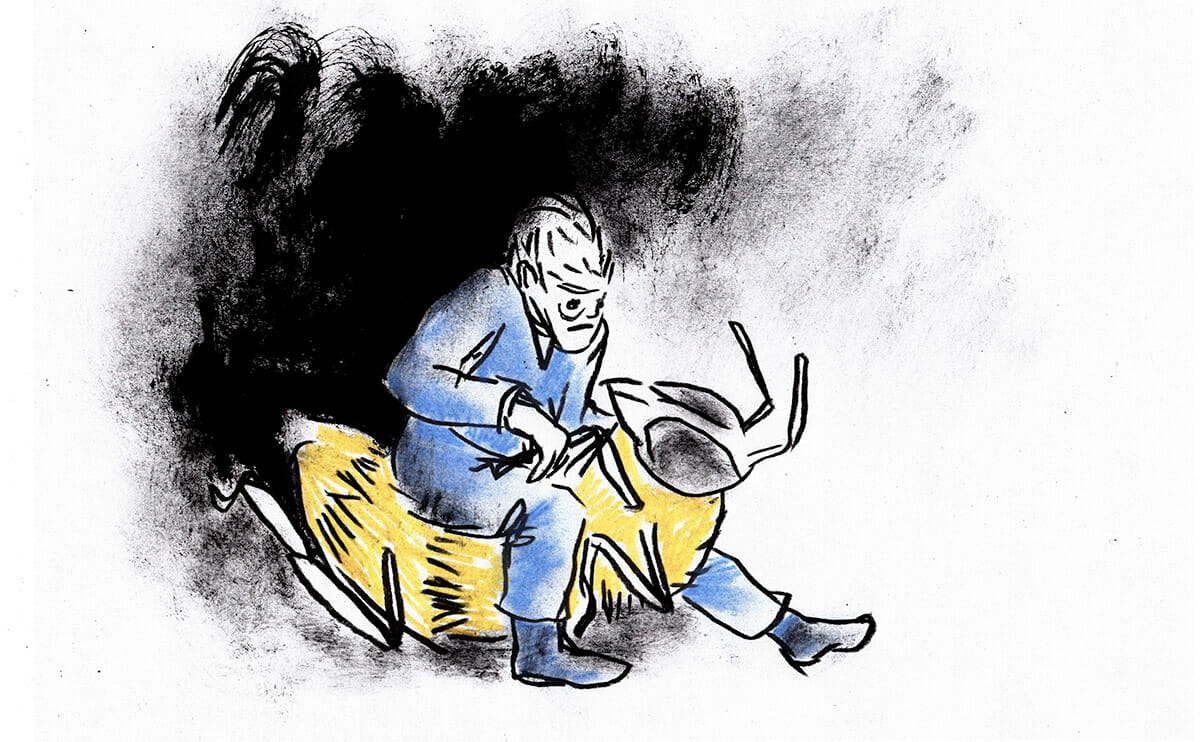 On first harvest mistakes: We were told that on your first year, you’ll be lucky if you get a harvest. We got about 40 lbs. But we didn’t know what we were doing so we decided to harvest it all in the garage with a hand-crank. Anyone who knows anything knows that you get an electric one. We had 10 blisters by the end of the day; it’s really hard to pour honey through an opening the size of your pinkie. Also most people use six ounce jars but we were using one ounce so it took forever. We got there at 10 a.m., didn’t finish until 7 p.m.

So it was a really long day. But it wasn’t really that bad when we took the box off [of the beehive] so we thought, you know what, let’s run it back up and put the empty frames back. So we go up there without any equipment and try to open the boxes. But at this point, the bees have realized that they’ve been robbed. So we get up there and nearly all the of the bees are on the outside of the hive. All the guard bees are looking for people who are going to attack. So we get chased off the roof at night, had to run downstairs, bring flashlights up and confront the really angry bees. It was a really harrowing experience.

On the takeaways: It’s one of those things that you’re always learning more about. No one can tell you everything up front. You kind of just jump into it.