Bill Heavey has carved out a niche as the non-expert outdoorsman, hunting and fishing his way through various adventures with a good deal more passion than proficiency. 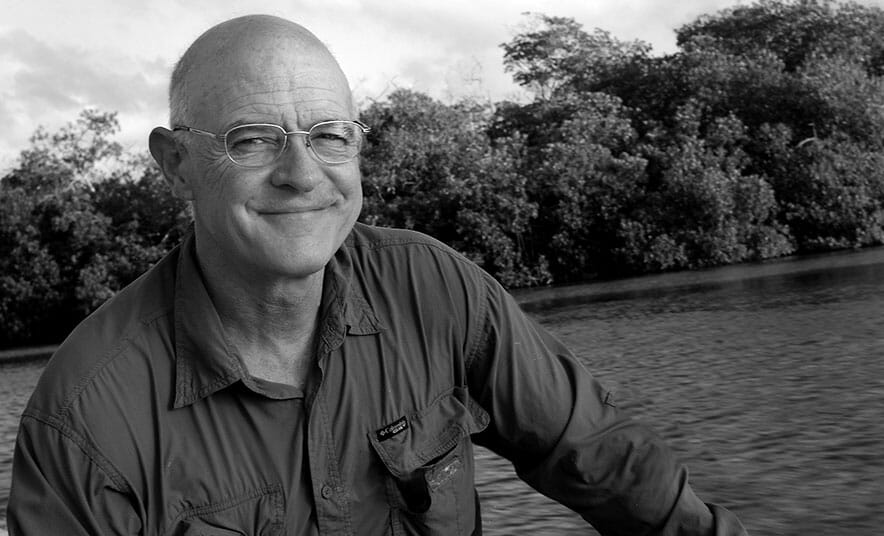 As editor-at-large for Field & Stream, Bill Heavey has carved out a niche as the non-expert outdoorsman, hunting and fishing his way through various adventures with a good deal more passion than proficiency. In his newest book, It’s Only Slow Food Until You Try to Eat It: Misadventures of a Suburban Hunter-Gatherer, Heavey takes to the woods with a new goal: “I set out to see how much of my own food I could get directly, with no middleman. In other words, by hunting, fishing, foraging, and growing a garden.”

Heavey, led by several mentors, stomps through his suburban D.C. neighborhood, catching more perch than he knows what to do with, raiding Arlington National Cemetery to feed his growing mushroom lust, and bloodying his hands trying to dig up cattail reeds (you can make a not-very-appetizing flour from the roots). Along the way, he journeys to the bayous of Louisiana and the tundra of Alaska to spend time with people who live off the land, either by choice or necessity. There’s even a bit of romance thrown in, with Heavey meeting his new fiancee through a shared love of foraging. Heavey’s bumbling attempts at self-sufficiency are a winning mixture of compelling and hilarious, while still providing enough rollicking blood-and-guts adventure to make it a smart choice for this Father’s Day.

Heavey was kind enough to answer a few questions for us via email about his wild times.

Modern Farmer: How long had you been hunting and fishing before you started trying to forage wild plants?

Bill Heavey: I’ve been fishing since I was a little kid, which I stopped in my early teens and rediscovered when some friends gave me a spinning rod for my 21st birthday. I’ve been hunting for about 15 years. I initially took up hunting because I was writing about fishing for Field & Stream, and I figured I could double my market there if I could add hunting. Hunting was sort of like the same obsessive-compulsive disorder, just one groove over in the LP of the mind. My mother remains horrified that her son hunts innocent animals.

MF: On your best day, how much of your diet was from wild or foraged food?

BH: Hard to say. There have been days when I’ve had three- or four-course meals that were nearly all wild: a salad of dandelion greens, chickweed, violet leaves, day lily shoots, followed by wild rice that I harvested on a lake in Wisconsin with Sam Thayer (who has two fantastic foraging books out) with wild garlic, barbecued venison backstrap and wild sour cherry pie.

But that’s the exception. I do enjoy incorporating wild food elements in daily cooking – throwing dandelion greens into scrambled eggs, for example, or putting mulberries or serviceberries (which I harvest and freeze for use throughout the year) into a smoothie.

MF: Before you started a garden in your backyard, the only thing you’d grown was grass?

BH: Yeah. I was a child of the suburbs. All we grew was the lawn. And I had to mow it. I did some research about lawns, because they’re such a useless, expensive, time-wasting, polluting use of ground. Grass lawns were cultivated by French nobles in the late Middle Ages as status symbols. It was a way of saying, “Look! I’m so wealthy that I can have my serfs engaged in completely non-productive labor.”

MF: To protect your garden, you attempted to kill a squirrel that was eating your tomatoes. How’d that go?

BH: Not well. I kept watching this one squirrel vandalize my tomatoes, which I’d come to love. He’d just take one big chisel-shaped bite out of each one and ruin it. I still don’t know why. Maybe it’s just one of the pleasures of being a suburban squirrel. Anyway, I tried to shoot one with my bow and thought I’d killed it cleanly. But when I went out to get it, I found that it was only wounded in the leg and had taken refuge inside one of the tomato cages. I chased it around the yard with a hoe, trying to finish it off. It slipped through the chain link fence into the English ivy in my neighbor’s yard with my arrow still in its leg. I hopped the fence and was chopping away and kind of freaking out because I couldn’t get to it in all that ivy. And then I heard a familiar car door slam and I realized that it was my ex bringing Emma, our daughter, over to my house for the afternoon. So I jumped back over the fence and tried to look like everything was fine. Which even a 10-year-old could see was not the case.

MF: Have you had to take up arms against pests in your garden since?

BH: No. That episode pretty much cured me of giving in to that impulse.

MF: Gardening was a small taste of being a farmer. Is it something you’d ever want to do full time?

‘Real farmers work their assess off seven days a week. I’m way too lazy for that.’

BH: Are you kidding? I worked on a farm for three days at one point during my research for the book. I ended up not using the material. But real farmers work their assess off seven days a week. I’m way too lazy for that.

MF: Foraging has become very trendy as of late. You volunteered for a dinner in San Francisco that was all foraged food, and it all seems unbearably hip. Do you think hunting will undergo the same type of revival?

BH: I have friends who say it already is undergoing it. Personally, I don’t really see it. You can dabble in foraging fairly easily, at least compared to hunting. I started hunting with a bow and it took me three years to kill my first deer. You’ve got to be pretty committed to stick with it that long before you succeed.

MF: You travel to the swamps of Louisiana and the tundra of Alaska to learn from people who live off that land. What was it like returning to your suburban home afterwards?

BH: Experiences like being with the Gwich’in in Alaska, whose oral tradition says that they’ve been following the Porcupine River Caribou Herd for 20,000 years, really throw you for a loop. You realize that for hundreds of thousands of years, 95 percent of human history, we were all nomadic hunter-gatherers. We lived out on the land and were incredibly connected to the land, the animals and the rhythms of nature. My host up there, Charlie Swaney, would wake up in the morning and sort of sniff the air. And just from that ”“ from being attuned to things that we all once knew, but which we lost so long ago we’re not even aware that we lost it ”“ he knew where the caribou would be and what they’d be doing. I saw him do this over and over and he was always right. And it was like Rumsfeldian “known unknown,” a thing that I knew I didn’t know and would never know. I was floored by it.

But then you get home and your own world takes over again very quickly.

MF: You had several mentors who helped you learn how to forage wild food. What did they teach you that a book couldn’t?

BH: Tons. There’s a built-in problem with trying to learn from foraging books, which is that the books teach you edible plants when they’re at their least-edible stage. The easiest way to distinguish plants is by their flowers and other mature characteristics. But the time you want to eat the plants is almost always long before this. Because by the time they’re flowering, they’re putting out bitter-tasting chemicals to defend themselves against being eaten. So that’s a huge disadvantage before you even get started.

Another thing is that you shouldn’t eat anything you’ve foraged on your own until you’ve got a few years of experience under your belt. You need to have it verified by a more experienced forager, because a lot of plants have poisonous lookalikes. Mushroomers have a saying, “You can eat any mushroom once.”

MF: If you had to pick, what’s the one thing that’s far, far better foraged than you could ever get from a supermarket?

BH: Sour cherries. I know a tree in downtown D.C. that produces the most delicious sour cherries, which make the best pies I’ve eaten anywhere. But you can hardly find sour cherries, even at farmer’s markets. Same with pawpaws, which are fantastic but don’t travel. So there’s no market for them. They were better known 150 years ago than they are today for precisely that reason.

MF: Flip side, what’s the one foraged thing you’d rather buy than try to find in the wild?

BH: Almost any grain. The amount of work is just insane.

MF: If someone came up to you and said, “Bill, I want to start foraging,” what would be your advice?

BH: I’d tell them to get a copy of Samuel Thayer’s The Forager’s Harvest: A Guide to Identifying, Harvesting, and Preparing Edible Wild Plants, which you can get on Amazon for about fifteen bucks. Then you need to find other people who are already foraging and hang out with them. There are primitive skills groups popping up all over and they always have some people who forage.

And, if you happen to be sensitive to poison ivy – as I am – get used to the idea that you’re going to be wearing long pants and sleeves. Poison ivy turns out to be one of the few plants that is thriving as carbon dioxide levels rise. I see it out in the woods and it just looks happier every day.