The majestic Antica Corte Pallavicina hotel and the 500 acres of farmland that surround it may be the finest example of agriturismo out there. 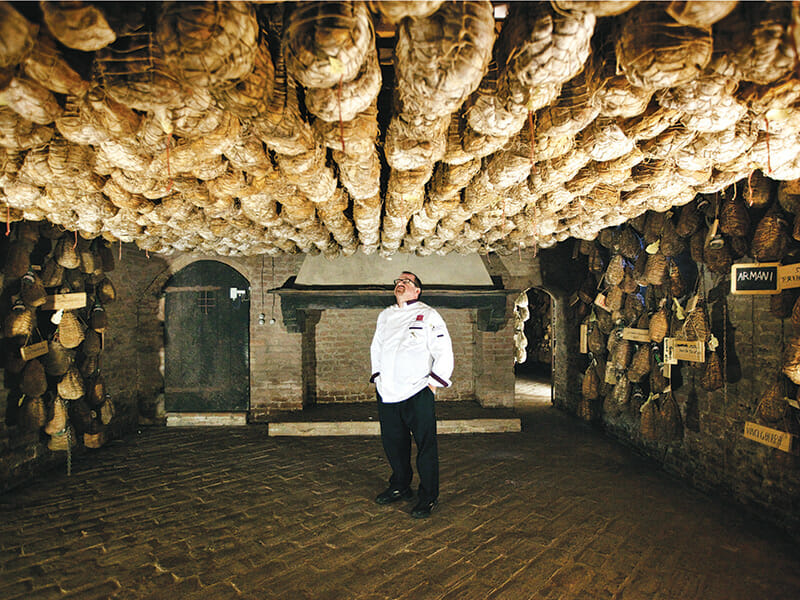 Flanked by the waters of Italy’s Po River, the driveway of the majestic Antica Corte Pallavicina hotel and the 500 acres of farmland that surround it are enveloped in a rich, leaden blanket of fog. It is this fog that holds the key to the riches of the region – the fertile flatland of the Bassa Parmense, north of Parma – and generates the humidity that creates the sweet, musky flavor of co-owner Massimo Spigaroli’s Culatello di Zibello. Made from a pig’s rump, this boneless ham is the Rolls-Royce of charcuterie that guests travel from as far as Japan and Brazil to sample. Culatello literally means “little ass,” and its artisanal production is the engine that has driven Massimo and his brother Luciano’s hotel to fame.

An innovative approach to agriturismo, the six-bedroom hotel – which includes two suites – is housed in a 14th-century castle and surrounded by pastures used to grow vegetables, raise livestock and make wine. The Spigaroli brothers purchased the estate 23 years ago and restored it to its former medieval glory with the addition of a glass annex that houses its Michelin-starred restaurant. Giant metal candelabras, a plethora of brick fireplaces, living rooms and an extensive culinary library make for a gloriously Gothic feel.

The two brothers run a tight but sumptuous ship, with Massimo as the visionary and Luciano as the business brain. It is thanks to Massimo’s ideas that guests here relive the stuff of rural idylls. Guided tours of the farm extend to the cavernous culatello cellars, and cooking classes teach guests how to make dishes ranging from mostarda to fresh pasta, or even more complex recipes from the restaurant menu. One such ambitious dish is the succulent faraona alla creta, which involves marinating guinea fowl in herbs like juniper and rosemary picked from the hotel garden, wrapping it in culatello, then baking it in a casing of clay from the Po River.

Encouraged to explore the farmland and its offerings, guests are provided with picnic baskets prepared by the kitchen that fix onto the hotel’s handmade Abici bicycles from nearby Lombardy. Don’t be surprised if cycle rides are stopped short by a traffic jam of geese or a haughty peacock or two strutting their stuff across your path. This is farming “Spigaroli-style,” where all animals run free. Massimo’s refusal to buy into industrial farming methods is what makes the hotel’s agrarian approach so unique, and his philosophy even extends to what kinds of animals he rears. Favoring forgotten breeds – such as the Parma turkey and fidentina hen – over cheaper ones raised by local farmers, his herd of black Nera Parmigiana pigs is a case in point. Massimo is perhaps the only person in the world to make culatello from the black pig (it is usually made with white pigs). Although he only produces 600 hams a year from his own costly swine, his culatello’s intense flavor and silken texture is so legendary that regular customers include high-profile figures such as Alain Ducasse, Giorgio Armani and even “Principe Carlo,” the Prince of Wales.

Despite not using chemicals or pesticides, Massimo doesn’t like to use the word organic. “We are not organic. We are natural and use the old ways of farming,” he says. His efforts stretch beyond livestock, and he has recently had success restoring the fortune of the red Fortana grape, a venture that has encouraged smaller producers in the region to follow suit. “The aim is to use what the land can provide,” says Massimo, who claims that 85 to 90 percent of the ingredients on the menu are reaped from his farm. Truffles (black and white) are unearthed from the poplar-packed woodlands, breakfast honey comes from the hotel beehive, preserves are made from the garden fruit trees and bread is baked with flour from the fields. In the same vein of self-sufficiency, Massimo even plans to make guest soaps from the offcuts of porkfat leftover from salami production. “The pig is like the music of Verdi: nothing goes to waste,” Massimo proclaims.

Although the Antica Corte Pallavicina has all the trimmings of a luxury hotel, its ambitions run deeper. “Culatello could do for us what one wine – Brunello di Montalcino – did for Tuscany. A whole region grew up and people visited it from all over the world. We think the same thing is happening here with culatello,” says Luciano. Educating visitors about food, farming and the fat of the land, the Antica Corte Pallavicina is agriturismo packaged in its most refined and revolutionary form. “Staying here should be a total experience,” says Massimo. And if this is his credo, he’s achieved exactly that.