We meet the new breed of global growers embracing agriculture. 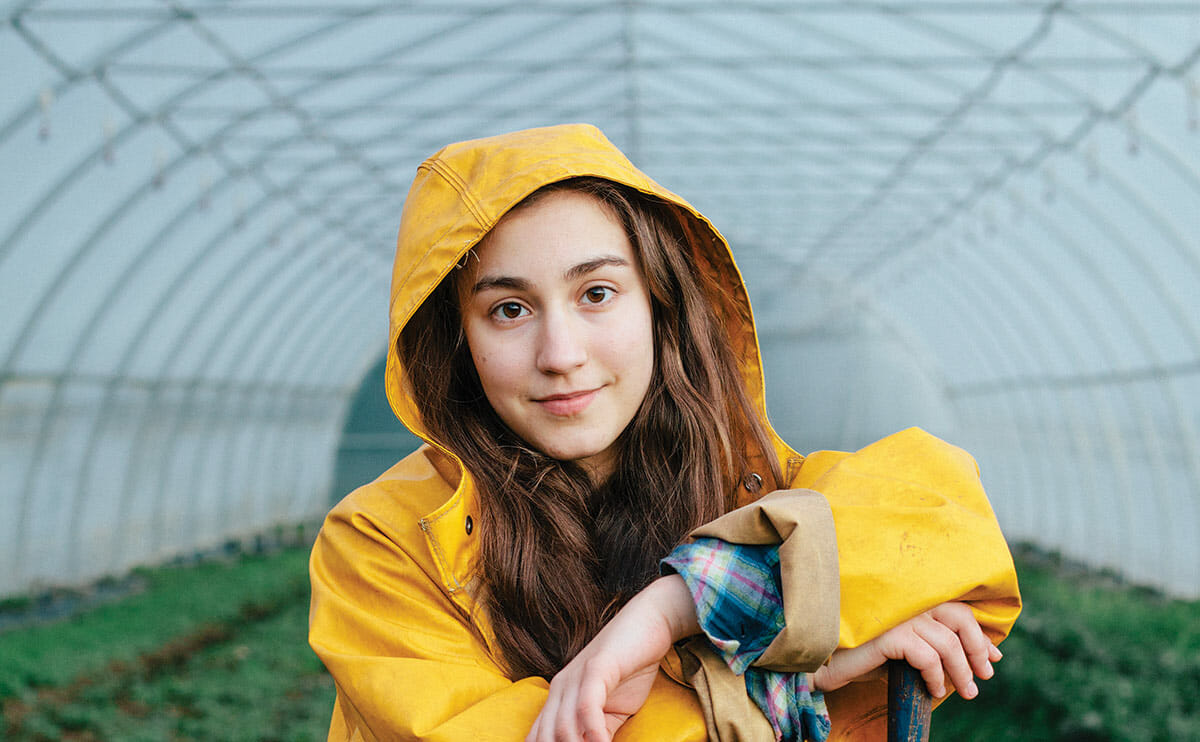 Spring is when things really start ramping up for Sophia Vartanian, who is embarking on her third growing season. The precocious 17-year-old urban farmer from British Columbia has been volunteering for gardens and farms around the city and orchestrating an ambitious mini-farm at her high school (complete with an indoor greenhouse). She’s also helping Vancouver’s young agrarian network build a map of beginning farmers around Canada in collaboration with the U.S.-based nonprofit, the Greenhorns.

After high school, Vartanian hopes to study medicine, but she’s not planning to outgrow growing food anytime soon. “Farming is a non-negotiable in my life,” she says.

This child of Soviet expats can often be found teaching her peers, but Vartanian is quick to point out that she’s not an expert, due to “the steep learning curve involved in farming.” and she’s already thinking ahead – way ahead. “You only have around 70 summers over the course of your life to get it right,” she says.

Decades before Rolf Henke committed to a life of organic cattle farming, he was an activist fighting for freedom of the press in Germany. In the late ’60s, Henke pirated and distributed obscure unpublished works by radical thinkers such as Wilhelm Reich. He eventually invested in his own press in Berlin, and by the late ’80s had built up one of the largest left-wing printing companies in the country.

In the ’90s, he put much of his profits into Gut Temmen, a 2,000-acre farm in Schorfheide, a nature reserve northeast of Berlin. Henke then bought the neighboring 3,000 acres with a historic church and small villa, where he now lives with his family. Henke believes in the communal spirit and his property hosts a plant breeder who experiments with rare hybrids in exchange for labor and the surplus of her heirloom tomatoes. Henke is also well-known throughout Berlin for providing chefs (several of whom have named dishes after the farm) with unusual cuts of meat. Ever the artist, most recently Henke has been hatching a plan with the founder of a Berlin nightclub to create an art park on the farm.

Mark Firth became a bold-faced name in the food world with his Brooklyn farm-to-table restaurants diner, Marlow & Sons and Marlow & Daughters. But four years ago, he moved closer to the source of his ingredients, buying an 82-acre farm in Monterey, Mass.

Firth raises sheep, pigs, ducks, laying hens and honeybees, as well as a range of fresh produce. Two years ago, he divested himself of the Brooklyn restaurants to devote himself full-time to farming. He hadn’t anticipated one issue, though. “It’s really expensive to raise everything organically!” he laughs. In order to sell his meat at prices that would recoup his expenses, Firth says he would have needed to hire a full-time marketing and branding consultant.

Instead he opened another restaurant, Bell & Anchor, in nearby Great Barrington. To break down his animals, he uses the services of Jeremy Stanton at the meat market, Great Barrington’s only all-local, pasture-raised butchery. The butchered meat then goes directly into Bell & Anchor’s rustic cuisine, a symbiotic farm-restaurant relationship that Firth says is singular for the Berkshires.

Cynthia Kern and Federico Bonomi have been together since they were teenagers. Their 26-year union has been productive – four children, an international clothing company, Kosiuko (renowned for its denim and housewares), three hotels – but their big passion is farming. Every weekend Federico and Cynthia pile the family into the boat or plane for the short trip from their home in Buenos Aires to their farm in Punta Gorda, a peninsula in the river plate in Carmelo, Uruguay. On their 900-acre farm, they breed Aberdeen Angus, grow corn and soy, and produce wine along with an award-winning extra-virgin olive oil. Their oil wins prizes internationally – quite a feat for the accidental growers. “When I bought the land, I discovered these 100-year-old olive trees,” says Federico. “So I started searching the web about olives and how to grow them and in 1999 decided to make the plantation.” For their third, recently opened hotel (all are dubbed Casa Chic), the couple has gone a step further in uniting their lives and their businesses: the hotel is on the edge of their working farm and guests are encouraged to go out into the olive groves and lend a hand with harvest.

Juan Murillo (left) is growing a quarter acre of raspberries and another quarter acre of vegetables on the small plot he’s leasing through the nonprofit Agriculture and Land-Based Training Association (ALBA). After graduating from ALBA’s nine-month course in organic farming and marketing, Murillo now has his own small farm through the organization’s unique incubator program.

The nonprofit, founded in 1972, has been a pioneer in giving those with fewer resources a leg up in the highly competitive world of farming. Murillo is glad to be using organic practices, especially after seeing his father – a former farmworker – spend years in the fields handling pesticides. (His father also now farms three acres he leases from ALBA.) Murillo does all the hard work – planting, weeding, watering and harvesting – on his own, before selling the produce to restaurants and schools through ALBA’s distribution channels. Murillo says all the sweat equity is paying off – ALBA offers a way out of conventional fields. “I like knowing we’re keeping the environment healthy,” says Murillo. “I also like knowing what I’m eating. And if I’ve grown it, I definitely know what I’m eating.”

When Kelvin Graddick announced that he wanted to reboot his grandparents’ farmers cooperative in Hamilton, Georgia, a few eyebrows were raised. And not just because the 24-year-old has a computer science degree. “There’s a lot of stigma behind farming, with sharecropping and slavery. A lot of people were taught to move away from farming, they were told there is no value,” Graddick says. “I want to change that. The communities where we live are where it’s needed most.”

His grandparents and a few other farmers started the West Georgia Farmer’s cooperative in 1965, and Graddick sees a need to bring it back: “People here have low incomes; they lack access to fresh food but they’re sitting on acres of land.” Graddick earned a grant to help revitalize the cooperative, and now there are 25 members (like Eric Simpson, pictured right) who share work, crops, tools, advice, sell at markets together and are beginning to spearhead collaborative growing projects. “The big change is in people’s mindsets about farming and growing food,” Graddick says.

Sam Levin, 19, grew up helping out on his grandfather’s horse farm and bouncing on hay bales at his neighbor’s house, but he didn’t know he would grow something until his brother handed him The Omnivore’s Dilemma one summer. He decided he wanted to eat more fresh food, and wanted his classmates to have access to it, too. When he entered high school in Massachusetts in 2007 he planted a garden on unused land on his school’s campus. The 1,500-square-foot garden quickly grew to a 12,000-square-foot plot run entirely by students. Soon after, Levin was invited to give comments at the Slow Food Nation conference and befriended movement doyen Alice Waters. Once it was unique to have a garden at your school, Levin says, but now it’s not weird to discuss them in casual conversation. Levin is now studying science at the University of Oxford, but his original garden continues to grow under the name Project Sprout. “That’s one of the most exciting things about it,” says Levin. “I’m not involved anymore. It keeps growing, shifting, expanding.” When it comes to agriculture, Levin says his participation is no longer a matter of choice. “It will always be a part of my life,” he says.

Popular
Is Agroforestry the Key to Hardier Row Crops?Shea Swenson
7 Smokable Plants You Can Grow That Aren’t MarijuanaBrian Barth
Where Has All the Mustard Gone?Chloe Faure
Why Don’t We Eat Turkey Eggs?Dan Nosowitz
Goat Sex: Everything You Wanted to Know But Were Afraid to AskAndrew Amelinckx
Explore Modern Farmer
Related
Environment, Plants
Is Agroforestry the Key to Hardier Row Crops?Shea Swenson
news
The Fertilizer Shortage Will Persist in 2023Shea Swenson
Animals, MTMF
Meet the Maine Teenager-Turned-Landscaper Thanks to Grazing GoatsBridget Shirvell
Animals, Food & Drink, Lifestyle
The Great (Sticker Shock) ThanksgivingLindsay Campbell
wpDiscuz
We use cookies on our website to give you the most relevant experience by remembering your preferences and repeat visits. By clicking “Accept”, you consent to the use of ALL the cookies.
Cookie settings ACCEPT
Privacy & Cookies Policy