After years of studying modern cuisine at restaurants like Oud Sluis in the Netherlands and Restaurant Picasso in Westouter, Belgium, chef Kobe Desramaults returned to In De Wulf, the brasserie and bed-and-breakfast his mother had opened on the former farm (wulf) where he was born and raised. “My mother was doing it alone, so I […] 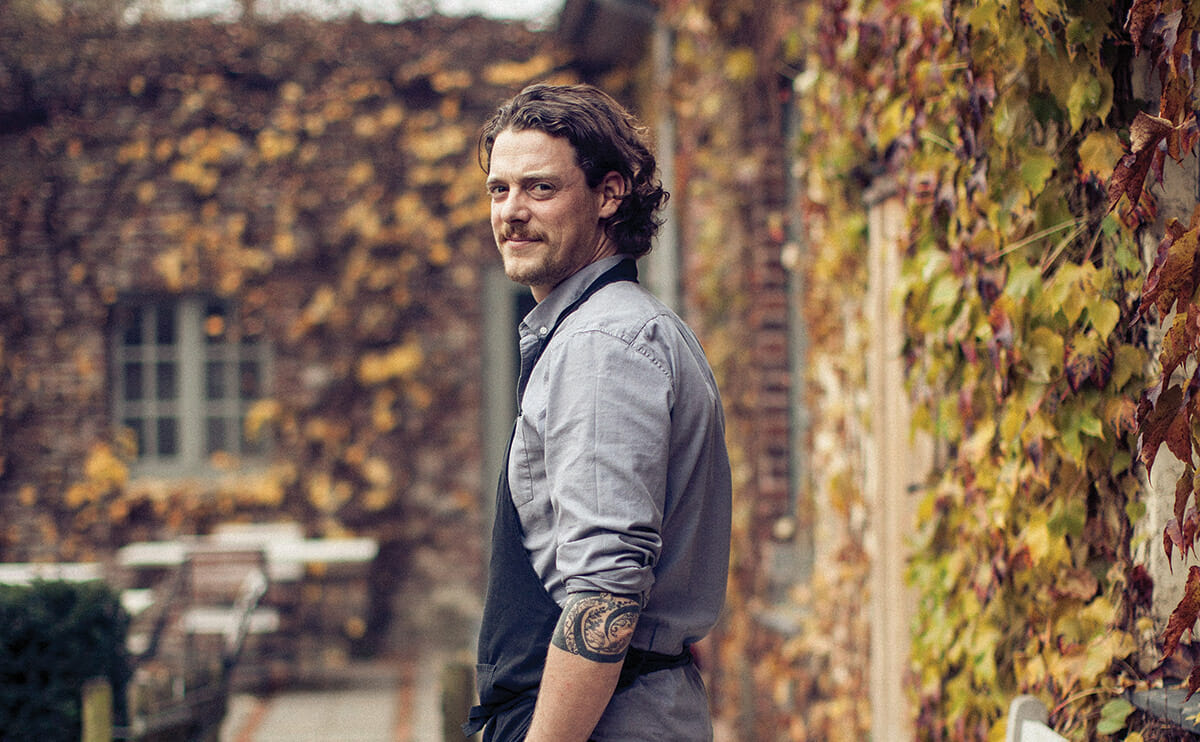 After years of studying modern cuisine at restaurants like Oud Sluis in the Netherlands and Restaurant Picasso in Westouter, Belgium, chef Kobe Desramaults returned to In De Wulf, the brasserie and bed-and-breakfast his mother had opened on the former farm (wulf) where he was born and raised.

“My mother was doing it alone, so I stepped in to take over the family business,” Desramaults recalls his home in West Flanders, Belgium, an hour drive from Brussels. While she had served traditional food like the eel dishes the Dranouter region of Belgium was once famous for, he brought the avant-garde creativity he had soaked up as a young cook.

It took a couple years for the chef to throw off the mantle of modern cuisine and find his own vision, one that entails working with nearby suppliers and foraging. “All of a sudden, I stopped looking around to other places all the time. It’s like with music. If you listen to other music all the time and go to concerts, you’re not working on your own thing.”

Once he found his voice, the rest fell into place. “You get people starting to write about your restaurant,” he says, “and then you get people coming into work who are excited to be there.” Last year, the decision makers behind San Pellegrino’s World’s 50 Best Restaurants list got excited enough to rank the cottage-turned-restaurant. (The Michelin reviewers gave In De Wulf one star eight years ago, making Desramaults the youngest Flemish chef to achieve that prize.)

Here, in his self-made “universe,” Desramaults collaborates with his next-door neighbor, Jose Wallbrou, who grows delicious produce. Whatever Wallbrou offers – radishes might be ready for picking in two days, beans in three – the chef puts on his constantly changing organic menu. In spring, it changes nearly daily; in winter, it can go days without much variation. “We just adapt,” he says. “You should be aware of what’s going on and respect what’s growing now.”

Dinner at the restaurant comprises “20 little courses” that Desramaults is reluctant to call dishes. These are composed of whatever is fresh within the closest proximity. He never knows exactly what he’s going to do with the produce until it arrives. “Sometimes,” he explains, “I’ll just go for one ingredient. It’s the best way to remember a dish, if you have as little going on as possible.”

In April, Desramaults turns his attention to hops. In De Wulf lies in one of few areas in Belgium where this plant thrives. The chef prizes their young shoots, which bear a strong resemblance to soybeans. “They’re very powerful and expensive,” he says. “Earthy, but not overpowering,” they have “a nice crunch” and “a peppery note.” He has served the shoots with nothing more than “some skim milk and reduced cream” and crushed ground elder on top.

To supplement whatever wild ingredients he gathers and the herbs and vegetables Wallbrou coaxes out of his garden’s soil, Desramaults uses animals from small local farms sparingly and in their entirety.

When you arrive at the warmly appointed rustic dining room that overlooks a vast field, you may find a duck or pigeon on your table. The fowls are aged for two weeks before their intestines are removed, then the birds’ cavities are stuffed with roasted hay and left to absorb its nutty, grassy flavor. The game is barely cooked – it is brought to room temperature and then roasted for a few seconds in butter infused with toasted hay. “We serve it almost raw,” he says. “Slightly bloody, but with a crispy skin.”

The In De Wulf team makes its own charcuterie, which is laid out for a daily breakfast spread that justifies – no, necessitates – booking a room at the adjacent inn. Everything is crafted on the premises – ham, sausages, pâtés, granola and bread, which Desramaults is perhaps most excited about. A wood-fired oven has been installed out back, behind the kitchen, and he recently brought on an American pastry chef, Wisconsin-based Sarah Lemke, to teach the staff the art of perfecting sourdough, among other baked goods.

Desramaults was so inspired by Lemke’s work that he has decided to open an organic bakery in Ghent. It will feature her loaves and vegetables from his Dranouter garden. He’s hoping to see the bakery up and running sometime this year and invited the American pastry chef back to spearhead the project. In the meantime, the chef will be waiting to see what the earth delivers.

Read more from our Global Guide to Local.