From Malawi to McDonald’s 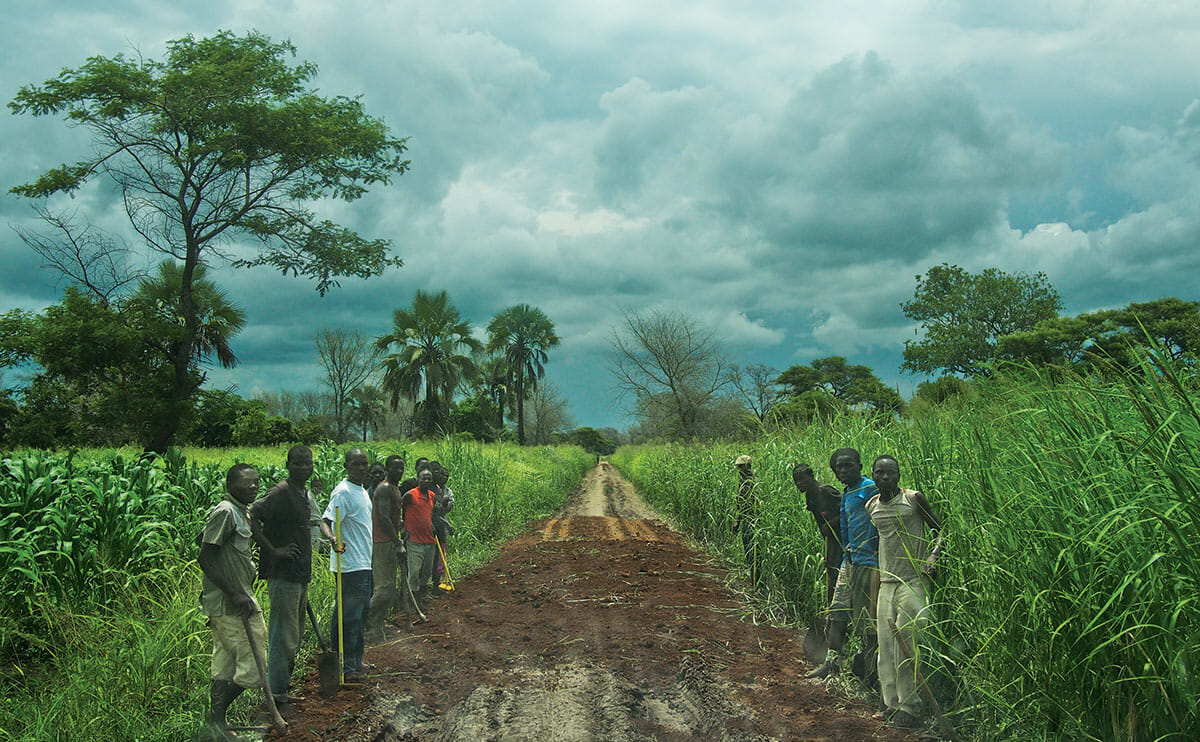 The mango trees on Lake Malawi feed most of their fruit to the shadows. Each year, millions of sweet, yel ow-fleshed mangoes grow wild in the East African country of Malawi, and 85 percent of them rot where they fall, according to Craig Hardie, one of the managing directors of Malawi Mangoes. It’s not that the mangoes aren’t fit for consumption – on the contrary, they’re delicious. The problem “is that the fruit ripens over a period of two to three months, there’s far too much for the population to absorb and there’s no local market,” says Jonny Jacobs, Malawi Mangoes’ co-managing director.

Fortunately, there is now a global market. Halfway around the world, the obesity crisis is creating opportunities for food manufacturers and fast-food restaurants to switch up their offerings. Burgers and fries are being nudged aside on menus to make room for fresh salads and smoothies. And where there’s a new menu item, there’s a new supply chain. 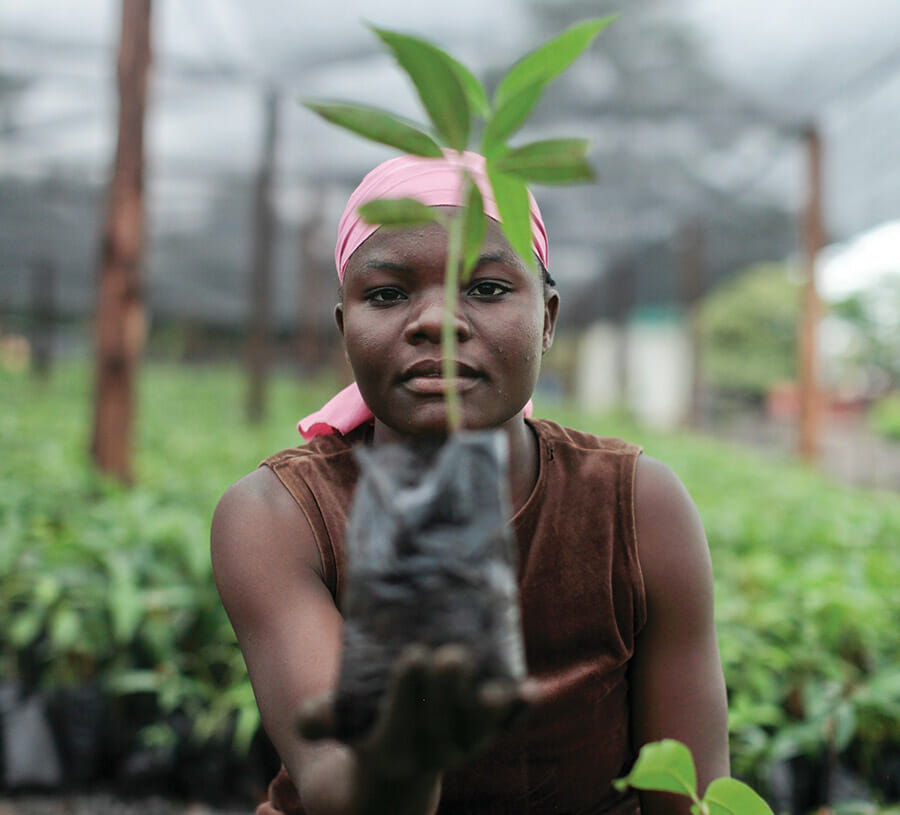 A farmer at Matumba Farm holds a grafted mango plant. The native Dodo is too small for smoothies.

The sudden increase in demand for smoothie-ready fruit was the reason that Jacobs and his business partner Hardie knew they had a viable concept when they launched the agricultural start-up Malawi Mangoes in 2008. “When McDonald’s entered the market with smoothies,” says Hardie, “that created an increase of about 10 percent demand [for mangoes] overnight.” Their plan was to become the link between the languishing wild fruit of Malawi and the insatiable demands of the juice industry. With the addition of some technological tools, they would be able to show buyers exactly where their fruit had come from, and how it traveled to reach them.

The two Brits came from the world of business, not the world of farming. Hardie worked in strategic marketing for blue-chip companies in the UK; Jacobs worked as legal counsel to several major private equity firms. They met for the first time in Malawi in 2007 while Hardie was exploring a personal interest in international development issues, and Jacobs was visiting a friend. Both were struck by the country’s incredible natural beauty and extreme poverty. The following year, when they were back in the UK, Hardie called Jacobs, and over lunch, they fleshed out the idea. Hardie then sent a letter to a major European juice maker – basically the Odwalla of Europe, a bottled juice and smoothie brand owned by Coca-Cola.

They said no to simply buying boxes of Malawian mangoes from Hardie and Jacobs, as proposed in the letter. But they offered to explain what it would take to get a yes, and thus began the pair’s rapid schooling in sourcing, shipping, processing and ultimately growing mangoes.

The first step was a feasibility study, for which the founders raised a small amount of capital from British philanthropists. To lead the study, they hired Dr. Wilson Gondwe, a Malawian who had earned his doctorate at Cornell University researching the banana genome and eventually found his way back to Malawi’s Ministry of Agriculture and Food Security. Gondwe himself is responsible for introducing a number of popular mango varieties to Malawi several decades ago, including the Tommy Atkins, a cultivar developed in Florida, which is now demanded by global drink manufacturers.

It’s these “improved varieties,” as they’re called – bred for sweetness, color and hefty pulp – that draw the business of the big-drink manufacturers. And the majority of Malawi’s wild mangoes do not fit the profile.

“In Malawi, the local variety is called the Dodo,” explains Jacobs. “It’s about 40 percent of the mango population. The other 60 percent are very small, yellow varieties that are incredibly fibrous.” Fortunately, overcoming the market limitations of the local variety was simple, through the common agricultural practice of grafting – specifically topworking, which would enable the in-demand mango varieties to be grown on the rootstock of Malawi’s wild trees.

With help from their agricultural advisors, Hardie and Jacobs determined that they would be able to grow a large percentage of their crop by topworking existing trees in the region, grafting on varieties from Florida and India that possess the characteristics international buyers look for. In addition, they would create their own four-season farm, where they could cultivate grafted saplings and bananas.

In 2011, they set up headquarters in Malawi’s Salima District and began planning the construction of their factory. To build up a base of growing partners, they sent teams of local horticulturists by bike to visit nearby villages, forging relationships with smallholder farmers. The ask was a big one: to allow Malawi Mangoes to chop off the tops of their trees and attach new scions – small branches containing the genetic material for the new variety. The promise was even bigger: when the new fruit comes in, Malawi Mangoes would buy all of it, providing the farmers with income to support their families.

It’s no small thing to change out a region’s fruit cultivars in order to sate the world’s thirst for smoothies, but the Dodo was doing little for the country economically. Down the line, Jacobs believes Malawi’s native mango could be made into a marketable juice, but their factory isn’t currently setup for production. In the meantime, the local community is responding positively to the agricultural shift. As of the end of 2012, the company has over 2,000 smallholder farmers signed on to have their trees grafted, and a six-month waiting list. Each farmer registers from the field using tablet software, which uploads their information via wireless internet. The GPS coordinates are entered into a database for every tree, which means that at harvest time, Malawi Mangoes will be able to track what days and in what quantities fruit was taken from each tree.

“In the modern economy, the ultimate consumer of this stuff wants to know where it has come from,” Jacobs notes. Companies could potentially offer smoothie consumers the ability to trace their beverage ingredients from the tree to the factory, and along the transportation chain, from Malawi to a port in Mozambique, another port in South Africa, all the way to Rotterdam and into the European distribution network.

This is the kind of information that major beverage brands want to be able to provide to their customer. And as soon as Malawi Mangoes is ready to start selling, those companies will be in line to start buying. Of course, the English executive whom they wrote to back in 2008 won’t be there waiting for the first shipment. He’s in Malawi now, working as the Director of Technical Affairs for Malawi Mangoes.