Diners in a very upscale San Francisco restaurant tuck into the salad course of their tasting menu. There’s a delicately dressed leafy green on the plate with a taste somewhere between butter lettuce and corn silk. The waiter says he needs to ask the kitchen forager to identify it. It’s Stellaria media, also known as […]

Diners in a very upscale San Francisco restaurant tuck into the salad course of their tasting menu. There’s a delicately dressed leafy green on the plate with a taste somewhere between butter lettuce and corn silk. The waiter says he needs to ask the kitchen forager to identify it.

It’s Stellaria media, also known as chickweed. You might have seen it in your yards and gardens but probably overlooked it. It’s green, grows low and has a simple, tiny white flower. Most gardeners either yank them, or, worse, apply an herbicide to get rid of them. Too bad. The same unassuming plant growing wild behind the back porch is now resting on a beautifully composed plate of wild greens in a plush dining room with a lot of little candles and salvaged wood.

I caught up with grower Frank Morton at Gathering Together Farm in Pilomath, OR. I ask him about chickweed and he bursts out laughing. “I’m pulling chickweed right now!” He has been growing chickweed both for his salad mix and for his seed company, Wild Garden Seed, since the 1990s.

The little heart-shaped leaves are fresh and light green and the plants sprawl low to the ground. Each stem this little crazy strip of plant hair, like a mini-mohawk, running down the edge. The ends of the stems carry small starry white flowers that produce thousands of tiny seeds – an ounce of them equals about 72,000 seeds give or take. Because it blooms before most plants, and flowers prolifically, it is ideal for getting a jumpstart on attracting and feeding populations of beneficial insects early in the season. And, savvy farmers have been using it for generations as a soil indicator. Chickweed usually grows only where the soil is high in nitrogen and phosphorus, and holds some water. If it’s stunted or pale, your soil lacks phosphorus. If it’s absent where it used to flourish, your soil is drying or depleted. 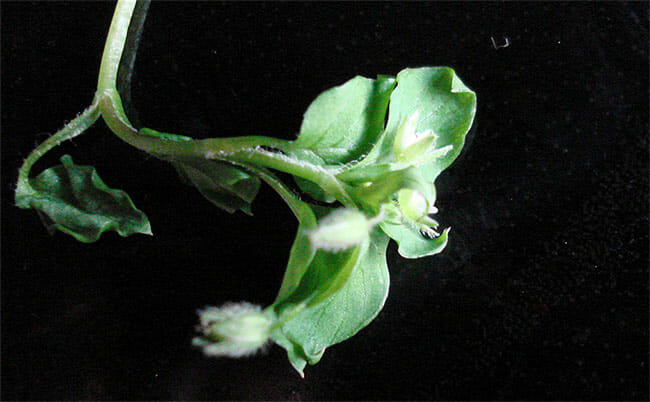 In medieval Europe, it was a common sight in the markets, and has been used in folk medicine as an aid to digestion and to clear the skin of rashes and blemishes. It concentrates nutrients, so it is nutritious for both the farmer as a green vegetable and for the soil when turned under before it sets seed.

The fact that chickweed can be grown most of the year in Oregon is not lost on Morton. “It’s a plant you can count on when not much else is growing. Depending on the season, chickweed was anywhere from 10 – 15 percent of our salad mix. We’ve picked it when it was two degrees outdoors and when it thawed it was perfectly good.”

Now, Morton is sharing the bounty. “We’ve grown it so long, we have perfected the technique of harvesting the seeds, so we decided to offer it along with other wild greens in our seed catalog.”

“In fact,” he says, “these plants we’re pulling today will be used for seed production.” The tiny seeds germinate slowly, like carrots, and must be kept moist. Grown in flats in a greenhouse, they can be delivered to restaurant kitchens to be harvested as needed directly off the growing medium. Or you can find some perfectly lush chickweed somewhere in a shady spot where it has been more than likely overlooked. Such is the subtle transition of a common weed from curbside to tableside.

This is based on an ancient English recipe. The homey and humble, foraged ingredients are transformed into a warm, comforting dish. Think of it as chickweed soup for the soul.

2 large bunches of chickweed washed well and chopped (use only the young
leaves and tops that have not flowered, remove any tough or stringy stems)
2-3 green garlic stalks, chopped (or use wild onion or wild garlic if you can
find it ”“ use both the white and green parts)
4 T of unsalted butter
2 small potatoes, peeled and diced
1 quart of chicken or vegetable stock
1 cup of heavy cream
Salt to taste
Optional garnishes: chickweed sprigs, cracked black pepper

1. Saute the green garlic: Melt the butter in a soup pot until foamy, then add
the green garlic and sauté until soft.
2. Cook the potatoes: Add the potatoes to the pot along with enough of the
stock to cover. Cook on medium high heat until the potatoes are tender when
pushed with a fork.
3. Add the chickweed to the pot. Cook for 5 ”“ 7 minutes. Remove from the
heat.
4. Puree: Allow to cool to the point where you can either safely use an
immersion blender, or transfer to food processor. Process until smooth. Add
remainder of stock to taste and bring to the boil. Take off the heat and stir in
the heavy cream. Add salt to taste.
Garnish with fresh chickweed and pepper if you like.