How Do You Farm A Clam That Can Grow 3 Feet Long And Live For Over A Century? - Modern Farmer
Food & Drink

How Do You Farm A Clam That Can Grow 3 Feet Long And Live For Over A Century?

The step-by-step guide to growing the giant phallic clam that's selling for as much as $100 each. 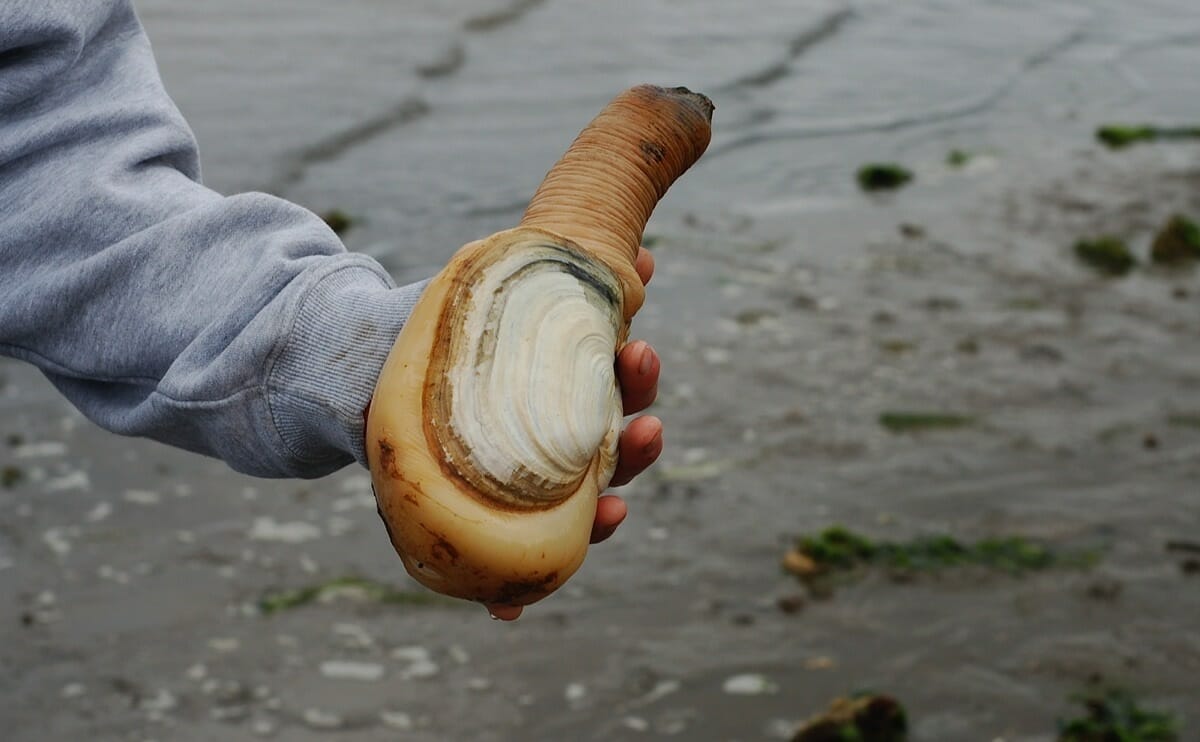 We called up Marco Pinchot, of Taylor Shellfish Farms in Puget Sound. Taylor is the largest shellfish farm in the country, and they’re not just doing geoduck. “If you’ve ever had Manila clams in New York City, they’ve come from us,” says Pinchot. “If you’ve ever had kumamoto oysters, they’ve come from us.” And if you’ve had geoduck, anywhere in the world, there’s a fair chance they came from Taylor’s farms. In a lot of ways farming geoduck isn’t that different from farming other clams, which is not to say that the process is easy or obvious — for one thing, it takes about six years on average to get a single geoduck raised from start to market. 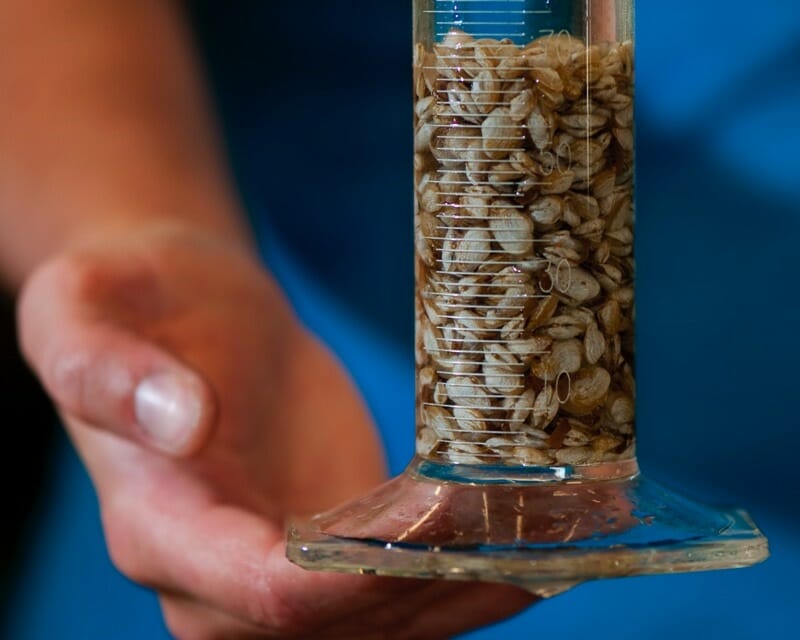 The farming starts with wild geoduck that Taylor buys from local fisheries. Geoduck actually do have male and female genders, but, says Pinchot, it’s impossible to tell by sight which is which, so you have to just dump a whole group of them into the spawning tank at once. The temperature of that tank is raised slightly, and Taylor throws in a bunch of delicious phytoplankton, to trick the geoducks into thinking it’s summertime, which is sex time for the clams. One of the geoduck will release a cloud of sperm or eggs, and the others will all soon follow, “which makes the tank nice and cloudy,” says Pinchot. The sperm and egg meet in that tank and form a zygote, a microscopic plankton-looking thing with a flagella (like a tail) for swimming.

Taylor lets them swim around happily in that tank for a couple weeks until the zygotes start undergoing various weird metamorphoses. Eventually they start growing a shell and a foot, the latter of which will be used for digging. “Then they need to settle, and they need sand for that,” says Pinchot. So they move them to another tank which has a different kind of food and moving water, to get them to keep growing, before heading off to the nursery.

Here’s the weird part about shellfish farming: it really is a lot like plant farming.

At this point, we should note, this process has been going on for probably a month, and Taylor isn’t even ready to plant these guys yet. Imagine if it took, say, a corn farmer an entire month before the seed could even be planted. This is an extraordinarily long crop cycle, even longer than most kinds of livestock. It’s an investment that won’t pay off for years and years. But it’s worth it.

The geoducks at this point look like tiny clams — incredibly tiny, but recognizable as clams. The geoduck has a smallish shell, at this point maybe as large as your thumbnail, and then a larger, fleshy, phallic-looking siphon which it uses to filter the water for the plankton it eats. Taylor has kind of a big barge out in the intertidal zone with baskets full of sand that hang down into the water beneath it. There the clams stay until they’re the right size, somewhere between a half and one inch long. Here’s the weird part about shellfish farming: it really is a lot like plant farming. The baby clams are referred to as “seed,” and are planted in the shallow waters of the Washington intertidal in pretty much the same way you’d plant lettuce in your garden. Taylor farmers use a pole to poke a small hole in the sand, a couple inches deep, and places the baby geoduck in, siphon up. 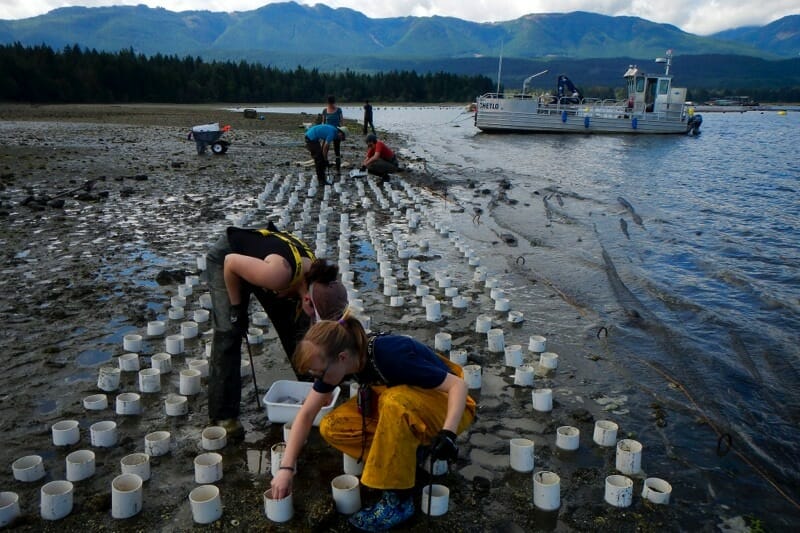 Then they stick a regular PVC pipe down into the sand over the geoduck, with some mesh on top to keep out aerial predators. “A geoduck is a tender creature that just about everything would want to eat,” says Pinchot, and its defense mechanisms are at their weakest at this early stage in its life. Those defenses: it buries itself very deep in the sand, about three feet deep by the time Taylor harvests them, and its siphon, which extends all the way to the surface, can retract quickly. Those aren’t great defenses until the clam can bury itself deep in the sand, so Taylor protects them with the pipes.

After a year or two, Taylor pulls up the pipes and reuses them for a new batch of baby geoduck. These older geoduck aren’t going anywhere; they don’t move laterally at all, unlike, say, a razor clam. That’s not to say there’s no predation, though. Pinchot names dungeness crabs, diving ducks, a particular kind of vicious burrowing snail, and even sea otters as possible predators of geoduck, but Taylor doesn’t lose many. After their pipe is removed, they stay down there for about four more years, slowly growing and thinking long clam thoughts. After six years, the harvesters come out to pull them up. “When people are recreationally digging geoduck, they say the clam moves so fast, but it’s not true,” says Pinchot. “It’s just that they pull the siphon down and it goes down so deep that people get the impression they’re moving, but they’re not. They’re just retracting the siphon.” Once you know that, it’s a lot easier to dig them up.

Taylor uses a diesel-powered water pump, which spits water at about the same rate as a garden hose, hooked up to a four-foot-long pipe. The pipe is inserted into the sand next to the geoduck — you can tell where they are by an indentation in the sand from the siphon — and turned on, to dislodge and loosen that sand. Then the harvester simply follows the hose down into the sand and snags the clam. “A good harvester is getting a geoduck about every 10 seconds,” says Pinchot. At this point, they’re about 1.25 pounds in weight on average. Then off they go to New York or Hong Kong, and other places where people like to eat giant clam.

Geoduck aquaculture is an extremely profitable farming product in a time when farming is generally not very profitable. Pinchot told me that though Taylor sells about 500,000 to 700,000 pounds of geoduck a year, there are plenty of mom and pop farms that might sell only 30,000 to 40,000 pounds a year — and are making a profit at it. That’s partly because, after that initial six year period where nothing’s happening, you can farm geoduck continuously, all year. It’s a touch harder to harvest in the winter, when low tide is at night, but it’s absolutely doable, unlike plant farmers in similar climates who are slaves to the seasons. The other reason it’s profitable? Did we mention that geoduck sells for up to $100 a clam?